A new Federal Reserve survey shows that bank loan officers are beginning to see some increased demand for loan growth, which has been muted for the last year now.

All year, the economy has been recovering from the pandemic-induced recession of 2020. But while spending levels have picked up, banks have not seen the material increase in loan balances and loan profits that they were hoping for. Part of that has been because increased liquidity has helped healthy consumers pay off existing loans early, while commercial customers have been dealing with disrupted supply chains and uncertainty from the ongoing pandemic.

Bank CEOs, however, have maintained that while timing may be difficult to predict, increased spending levels and significant economic growth at some point have to translate into loan growth. Now, for the first time in a while, there seems to be real evidence that this may be happening. 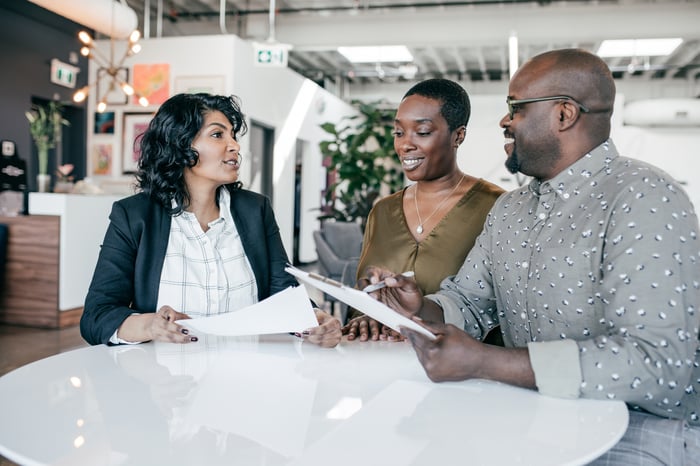 Most banks have been struggling to grow loan balances, traditionally their primary source of revenue. Net interest income, which is essentially the profits banks make on loans and securities, also continues to struggle, especially with the yield on the 10-year U.S. Treasury bill declining significantly in the second quarter (securities and some loan yields are linked to longer-term Treasury rates like the 10-year).

Data from the Federal Reserve shows that loans and leases at all commercial banks in the U.S. declined in both the first and second quarters of the year, with growth in consumer loans being offset by declines in commercial loans and residential real estate, which flourished in 2020 due to all the refinancing activity.

But in the Fed's recent Senior Loan Officer Opinion Survey on Bank Lending Practices, which asked bank loan officers about loan demand in the second quarter of the year, banks reported signs of progress. Loan officers at many banks reported the easing of lending standards for commercial and industrial (C&I) loans, which tend to be for small businesses.

A modest number of banks reported the easing of credit standards on multifamily and construction loans, while credit standards on commercial real estate loans remain unchanged. Banks also eased lending standards for most mortgage loan categories and for revolving home equity lines of credit (HELOCs), while a large portion of banks eased lending standards for credit card loans, but more moderately so for auto loans and other consumer loans.

Banks tend to tighten lending standards during recessions, which is what they did during the pandemic. When this happens, banks may require more money down initially, higher FICO scores for borrowers, or higher thresholds on a borrower's income or a business' monthly revenue intake. They get more strict because unemployment rises during a recession and borrowers who once looked healthy can start to struggle. When credit standards begin to ease, it can be a good indication that banks feel better about the economy and are preparing for loan growth. It also creates a larger window of people and businesses to lend to.

The other good news from the loan officer survey is that many bank respondents reported growing demand for loans. In terms of C&I loan demand, a modest portion of banks reported stronger demand from small and large and middle-market firms, but a significant portion of banks reported "a higher number of inquiries" from potential borrowers regarding new revolving lines of credit or increases in existing lines over the second quarter. These are loans that allow companies to have a line of credit up to a certain amount they can draw on at any time. For a while now, line usage has been at historic lows for most banks.

A majority of banks reported increased demand for multifamily and construction loans, while there was a smaller group of banks that reported stronger demand for loans secured by commercial real estate.

Most banks also reported stronger demand for most types of residential mortgages. Specifically, jumbo mortgages, which are mortgages for more expensive homes that exceed lending limits set by the government, saw the most increased demand. Loan demand was less apparent for government residential mortgages, subprime mortgage loans, and HELOCs. Demand for auto and credit card loans continued to ramp up among most banks, which is not a huge surprise considering that's where most banks reported the most progress on actual loan growth in Q2.

Q3 results will be important

The recent senior Fed loan survey is another reason to keep the faith that loan balances and net interest income will at some point have to pick up if the economy keeps trending like it is. But many bank management teams in their Q2 guidance still didn't seem to know if material loan growth would be a 2021 event. After all, while many reported solid consumer originations, accelerated prepayments on existing loans muted actual growth. What will be important to watch in Q3 is whether there is a pickup in commercial lines, which are at historic loans, and maybe signs that prepayments are starting to slow. Both should start to result in the material loan growth that banks have now been waiting on for more than a year.