Strong earnings reports from these high-flying tech stocks can lead to more upside.

Nvidia (NVDA 8.24%) and Applied Materials (AMAT 6.15%) have handsomely rewarded investors in 2021. Stocks of both tech companies have easily beaten the broader market on the back of impressive growth in revenue and earnings, which is being driven by favorable demand trends in their respective end markets.

The good news for investors is that both stocks could get a nice shot in the arm when they release their quarterly results. Nvidia's fiscal second-quarter results are due on Wednesday, Aug. 18, while Applied Materials will release its fiscal third-quarter report the following day. Let's look at the reasons why it may make sense to buy these stocks before their earnings are released. 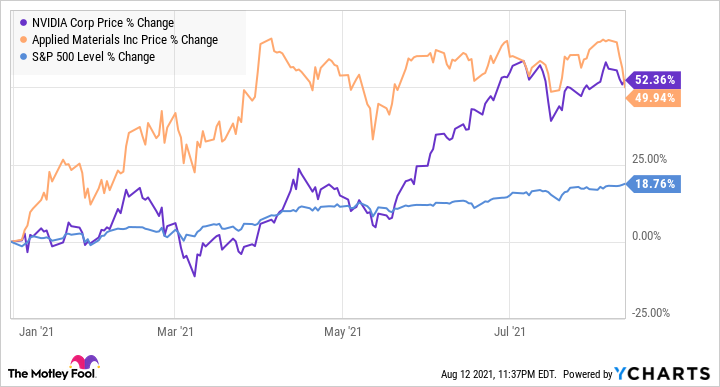 Nvidia is already an expensive stock with a trailing price-to-earnings (P/E) ratio of 94, which is significantly higher than the company's five-year average P/E multiple of 54. The stock trades at 51 times forward earnings, which points toward a sharp increase in the earnings.

However, Nvidia's expensive valuation seems justified given its explosive growth. Its first-quarter revenue had increased 84% year over year, while adjusted earnings per share had more than doubled to $3.66. For Q2, Nvidia expects $6.3 billion in revenue, which would be a 63% increase over the prior-year period's revenue of $3.87 billion.

The good news is Nvidia is set to register such impressive growth rates in the long run, and the bad news is that the stock may continue to get more expensive as investors bid it up to take advantage of some impressive growth drivers. The video gaming segment, for example, is in the early innings of a long-term upgrade cycle.

Nvidia's RTX 30 series graphics cards based on the Ampere architecture are encouraging existing users to upgrade in big numbers. That's evident from the fact that its latest-generation graphics cards have been consistently facing a stock shortage. Despite that limitation, Ampere is Nvidia's fastest-ramping GPU architecture with initial sales growing at twice the pace of the previous generation Turing architecture.

More importantly, Ampere GPUs have pushed Nvidia's average selling price to $360, as compared to $300 during the initial sales period of the Turing cards. Nvidia has been pulling strings to improve GPU supply by restricting the cryptocurrency mining capabilities of its graphics cards, which should allow the company to cater to customers who are yet to upgrade to its latest offerings. As a result, it won't be surprising to see Nvidia ship more graphics cards to gamers in the recently concluded quarter and benefit from a combination of higher volumes and improved pricing.

Additionally, the chip giant had pointed out in April this year that 85% of its installed base is yet to upgrade to an RTX series card. So, the terrific momentum of Nvidia's gaming business that produced nearly 49% of its Q1 revenue and registered 106% top-line growth year over year in Q1 can continue.

The data center business is the second-most important catalyst driving Nvidia's growth. It grew 79% year over year in Q1 and accounted for 36% of the total revenue, recording its first-ever $2 billion quarter. Investors can expect solid growth from this segment once again as Nvidia's GPUs are being deployed by hyperscale data centers and cloud service providers to tackle artificial intelligence workloads.

GPUs are the dominant chips when it comes to accelerating AI workloads in data centers. The demand for data center GPUs is expected to grow at an annual rate of 43.5% through 2026 to $26.2 billion, according to third-party research. Nvidia's data center revenue stood at $6.7 billion last fiscal year, so the segment has a lot of room to grow in this vertical in the long run. Throw in the fact that Nvidia is tapping other types of data center chips as well, and it would be safe to assume that this business could keep growing at impressive rates in the future.

As such, a strong showing from Nvidia during its next earnings report is likely to boost the stock's momentum. That's why investors looking to buy a growth stock can consider adding Nvidia to their portfolios before it becomes more expensive, as the company seems capable of justifying its rich multiple thanks to the opportunities it is sitting on.

Applied Materials is offering solid growth at a cheap valuation

Applied Materials is an ideal bet for investors looking to buy a growth stock trading at a reasonable valuation. The stock trades at 28 times trailing earnings, which is lower than the S&P 500's multiple of 31.2. For this attractive multiple, investors can buy a stock that delivered 41% year-over-year revenue growth in Q2 and an 83% spike in adjusted earnings per share.

For the third quarter, Applied Materials anticipates $5.92 billion in revenue and adjusted earnings of $1.76 per share at the midpoint of its guidance range. Those numbers would translate into a 34% year-over-year revenue jump and a 66% increase in earnings per share.

Now, Applied Materials CEO Gary Dickerson had pointed out in the May earnings conference call that the company is "still in the early innings of major secular trends that will play out over the next decade and drive the semiconductor and semi-equipment markets structurally higher."

That's why investors need to focus on the big picture beyond this week's earnings report. They may even consider buying the stock before the report as the company has consistently beaten Wall Street's expectations over the past four quarters, a trend that's likely to continue thanks to the growth in semiconductor investments.

It is also worth noting that the favorable conditions driving Applied Materials' growth can last beyond 2022. Taiwan Semiconductor Manufacturing, for instance, had announced earlier this year that it will be investing $100 billion over the next three years to boost capacity. Korean giant Samsung is also planning to put $151 billion in non-memory chips through 2030.

These tailwinds indicate why Applied Materials is on track to enjoy growth both in the short and in the long run, and investors could make a smart move by adding this semiconductor stock to their portfolio while it is still cheap.