The freshly public fintech company tanked after earnings, but long-term investors can take advantage of the weakness.

Shares of SoFi (SOFI 5.92%) got crushed on Friday, falling by 14% after the company reported second-quarter earnings that included quite a bit of red ink and an outlook that fell below expectations. While the fintech company is facing some modest headwinds in parts of the business, there is a lot of context that investors should acknowledge to better understand SoFi's prospects, particularly as the company becomes more sophisticated as it expands its offerings.

Here's why SoFi's earnings plunge is a buying opportunity in disguise. 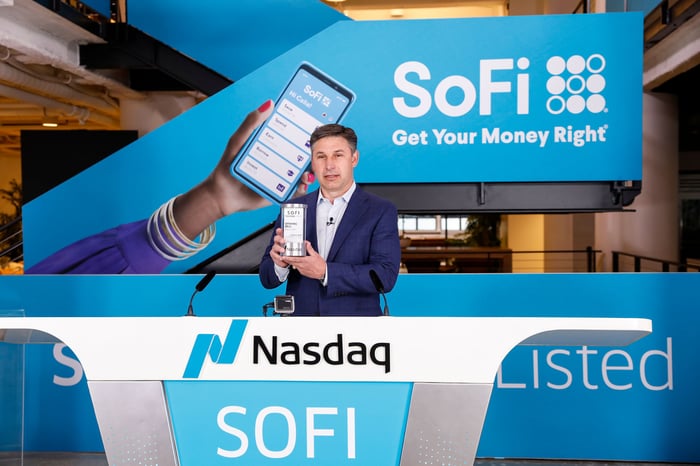 About that net loss

SoFi reported a net loss of $165.3 million, or $0.48 per share. That was significantly worse than the consensus estimate of $0.06 per share in losses. It's worth noting that SoFi only recently completed its de-SPAC transaction, so there were only two analysts covering the company. It also takes a little while for analysts to calibrate their models. More importantly, there were two primary drivers for the net loss: decreasing a valuation allowance and accounting for market fluctuations for outstanding warrants.

Here's a brief rundown from when Twitter made a similar adjustment a couple years ago (after Anthony Noto had left his position as Twitter COO to become SoFi's CEO).

In April, the SEC issued new guidance for SPACs that required companies to start accounting for outstanding warrants as liabilities, including market fluctuations on the income statement. As SoFi stock had rallied through the end of June, so, too, did the value of those warrants -- and the negative impact on SoFi's results. The reclassification was bound to make SPAC earnings more volatile, since warrants are derivatives that experience significant fluctuations. The fair value changes -- a non-cash charge that has no relation to SoFi's underlying operations -- related to warrants was nearly $71 million in the second quarter, or over 40% of reported losses.

"The absence of that tax benefit, together with significant non-cash stock-based compensation expenses and fair value changes in warrants primarily related to the fair market value of SoFi stock, were the largest contributors to the current period net loss," SoFi said.

SoFi's expansion into additional financial services products is clearly resonating with consumers, with SoFi Invest and SoFi Money helping drive massive growth in that segment. Products in the financial services business more than tripled to 2.7 million.

As far as headwinds go, the lending business is being impacted by a few factors. The Biden administration recently extended the moratorium on student loan payments through the end of January 2022 as part of the CARES Act, and overall student loan origination volumes remain depressed compared to pre-pandemic levels. Apex Clearing, which is preparing to go public with its own SPAC deal, also bought back a minority stake that SoFi previously held, which will modestly reduce revenue in SoFi's technology platform business.

The core pillars of the SoFi thesis remain firmly intact. Expanding the product portfolio creates ample cross-buying opportunities and marketing efficiencies. On the conference call with analysts, Noto noted that cross-buying activity among members is accelerating, and SoFi is making progress in obtaining its bank charter from federal regulators. That move will allow SoFi to become a national bank, giving it access to cheaper capital, which will in turn expand margins.

Fintech competition is undoubtedly intensifying, but SoFi is positioned to become a comprehensive financial services platform for a new generation of consumers.

Why SoFi Stock Was Sliding This Week
349%