Please ensure Javascript is enabled for purposes of website accessibility
Log In Help Join The Motley Fool
Free Article Join Over 1 Million Premium Members And Get More In-Depth Stock Guidance and Research
By Scott Levine – Aug 18, 2021 at 8:13AM

There are bound to be plenty of winners from the passage of the infrastructure bill. These three stocks are all contenders.

Having passed the U.S. Senate last week, the infrastructure bill is now the subject of focus in the House, where some representatives are less than keen on the legislation, though it appears to be building support on both sides of the aisle.

While many Americans are eager to see the bill pass so that their local highways and byways can receive some much-needed upgrades, investors are particularly focused on whether it will make it to President Biden's desk, as it represents a catalyst for infrastructure-related stocks such as Brookfield Renewable (BEP -0.47%) (BEPC -0.62%), Rogers (ROG -1.49%), and Vulcan Materials (VMC -1.02%). 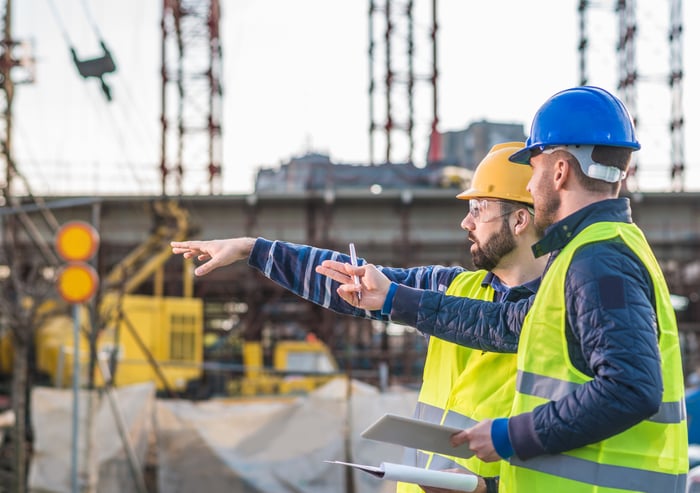 Investors eager to take advantage of the opportunity that the infrastructure bill provides but who seek a more conservative approach will want to consider Brookfield Renewable, which operates hydroelectric, solar, wind, and energy storage assets in North America. Since the legislation invests $73 billion in facilitating the U.S.'s transition to renewable energy, Brookfield Renewable is sure to benefit.

Speaking to the opportunity which the legislation affords the company on its recent second-quarter 2021 conference call, Connor Teskey, the company's CEO, said the following:

One of the most exciting things about Biden's infrastructure bill is it is so all-encompassing. There are things in that bill that can be helpful to so many different parts of the market. And we think for investors and operators such as ourselves that can play across the decarbonization spectrum across operating or development assets, there will be a number of opportunities.

Go for a ride with this under-the-radar EV stock

With investments of $7.5 billion to expand the nation's EV-charging infrastructure and $5 billion in funding for zero- and low-emission buses, the passage of the infrastructure bill means that businesses like Rogers, a $3.8 billion market cap company that's a leading provider of advanced electronics solutions, will be in high demand.

Rogers, for example, provides a range of busbar solutions -- an important power distribution component of EV-charging stations. The company also has a variety of products that can be found inside the vehicles themselves, including battery packs, electric powertrains, and inverter connections. On the company's recent conference call, it highlighted how sales in the Advanced Mobility segment (which includes EVs and hybrid EVs) have accounted for 28% of the company's year-to-date revenue -- more than any other segment.

It's not only the electrification of vehicles that presents an opportunity for Rogers; the company also serves renewable energy customers. In fact, the company's clean energy segment accounted for 10% of its year-to-date revenue. From converters for wind turbines and utility-scale solar projects to electrical insulation and shielding, Rogers also stands to benefit from the $73 billion investment in modernizing the electric grid with renewable energy assets.

Those on the lookout for companies with robust balance sheets will find Rogers especially interesting. In its Q2 2021 earnings report, Rogers reported no debt and $204 million in cash and cash equivalents.

This company's ready to rock with rebuilding aging infrastructure

Pivoting from a focus on renewable energy and EVs, investors will find Vulcan to be another company that is poised to benefit from the infrastructure bill. The company is the self-proclaimed largest producer of construction aggregates such as crushed stone, sand, and gravel, and it's also a producer of aggregates-based construction materials including asphalt and ready-mixed concrete.

Since the infrastructure package provides $110 billion of new investments in bridge repair, replacement, and rehabilitation, there's little doubt that Vulcan Materials will be in high demand. This hardly seems like the only way in which Vulcan can benefit, though. Investments in updating the nation's port infrastructure, as well as a variety of other areas such as $25 billion to address repairs at airports, will undoubtedly require asphalt and concrete -- a core competency of Vulcan's business.

Vulcan's opportunity to benefit from the passage of the legislation is better today than it was just two months ago. In June, Vulcan announced its planned acquisition of U.S. Concrete for $1.3 billion. According to Tom Hill, CEO of Vulcan, the deal is "a logical and exciting step in our growth strategy as we further bolster our geographic footprint." In 2020, for example, U.S. Concrete shipped 12.6 million tons from its 27 aggregates operations that serve California, Texas, and the Northeast.

Since it's providing $550 billion in new investments for everything from water pipes to broadband internet, the infrastructure bill figures prominently on many investors' radars right now. As to be expected, the passage of the legislation is far from a certainty, as the usual political wrangling is preventing it from reaching President Biden's desk. Should it receive his signature, though, Brookfield Renewable, Rogers, and Vulcan all stand to benefit.

For investors who find themselves on the conservative side of the risk spectrum, large-cap stocks like Brookfield Renewable and Vulcan may be better bets. More speculative investors may find Rogers, and its exposure to the EV industry, a better opportunity.