Please ensure Javascript is enabled for purposes of website accessibility
Log In Help Join The Motley Fool
Free Article Join Over 1 Million Premium Members And Get More In-Depth Stock Guidance and Research
By Rick Munarriz – Updated Aug 18, 2021 at 10:50AM

The NBA Experience closes just two years after its debut. It could be time to bring back the attraction it replaced.

The NBA Experience at Walt Disney's (DIS -1.04%) Florida resort was apparently more of an air ball than a slam dunk. Disney World announced this week that it's closing down the basketball-themed attraction at its Disney Springs shopping complex.

The closure is noteworthy because it debuted just two summers ago, and since it never reopened after the pandemic, it was technically available to guests for just a few months between August of 2019 and March of 2020.

Disney is not ready to announce what it will do with the space, but longtime fans are hoping that the House of Mouse considers bringing back DisneyQuest, the five-level next-gen gaming arcade that Disney Springs closed down four years ago to build the now-defunct NBA Experience. 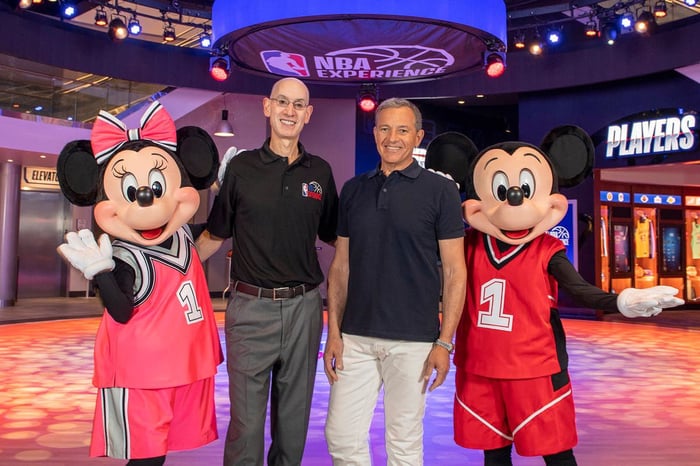 Disney World and basketball are old friends. Disney is the majority stakeholder in ESPN, the iconic sports network. It doesn't own the local Orlando Magic franchise, but it has had promotional tie-ins with the team before. It's also not a stretch to argue that the team wouldn't be called the Magic if Disney's Magic Kingdom wasn't the world's most-visited theme park.

Disney World also played a starring role for the league last summer when the NBA resumed its pandemic-shortened season. All contending teams concluded the season at Disney World's Wide World of Sports complex, housed at the resort's shuttered hotels to keep the COVID-19 risks in check.

The partnership between Disney and the NBA made sense, but the attraction itself never did. It was a premium-priced experience anchored by high-tech hands-on interactive games and other immersive experiences. Outside of the freely accessible NBA gift shop downstairs, it was just never much of a draw on the quiet west side of the Disney Springs shopping and entertainment destination.

DisneyQuest also wasn't exactly a smashing success in its final years of operation, but at least those wounds were self-inflicted. Disney World failed to update, and in some cases maintain, the attractions housed in the Disney-themed arcade. But it was a larger draw than the NBA Experience, and with some of its most popular games themed to Toy Story, Aladdin, and the Jungle Cruise ride, the tie-ins to Disney were clear.

Can DisneyQuest come back? Of course. Will it come back? Probably not. It would be an admission that Disney made a mistake in shuttering the indoor attraction four years ago. Disney World turns 50 on Oct. 1, and with the resort kicking off an 18-month celebration on that date, the last thing it wants to do is draw attention to one of its mistakes. Quietly closing the NBA Experience now (while it's still shuttered) makes the damage control easier to manage than doing so in the fall when the media circus comes to town to cover the resort's important milestone.

However, whatever the entertainment stock bellwether does eventually announce for that space will have to be special. The return later this year of Cirque du Soleil shows to the west side of Disney Springs should help breathe new life into that end of the complex, but the large NBA Experience can't sit vacant for too long. Bringing back DisneyQuest (or at least whatever the evolutionary version of what the next-gen video arcade could've become) makes more sense than just adding more stores or dining places, which are already there in abundance at Disney Springs. The ball's in Disney's hands now. Let's hope it doesn't miss the shot again.