The cloud giant still has plenty of long-term growth potential.

Between fiscal 2005 and fiscal 2021, which ended this January, Salesforce's annual revenue grew at a CAGR of 34.9%. That growth was driven by the market's demand for Salesforce's CRM services, the expansion of its cloud ecosystem with new sales, marketing, and analytics clouds, and big acquisitions.

But after those massive gains, investors might be wondering if it's too late to buy Salesforce's stock.  Let's examine three of Salesforce's core strengths to answer that question. 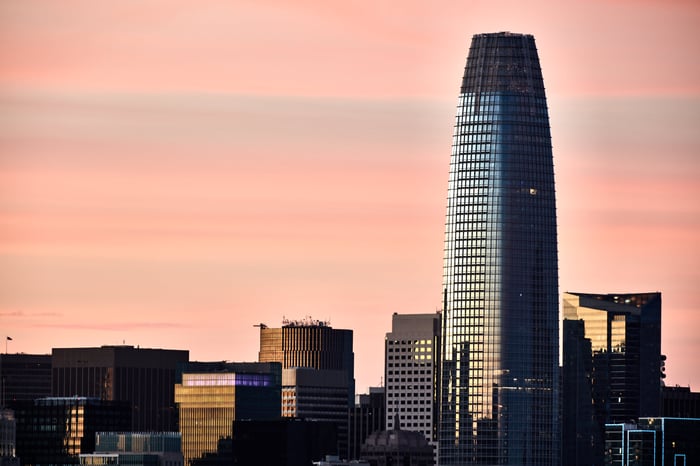 1. More than doubling its annual revenue by 2026

Salesforce expects the combined total addressable market (TAM) of its five end markets -- sales, services, marketing & commerce, platform, and analytics & integration -- to expand at a CAGR of 11% between fiscal 2021 and fiscal 2025 to become a $175 billion market:

Salesforce expects to grow at a faster pace than the broader market as it expands its market share, ramps up its investments, and buys even more companies. If Salesforce can achieve that goal, it certainly isn't too late to buy its stock -- which could more than double along with its revenue.

2. Its business is evergreen

Many enterprise software companies struggle during economic downturns as their clients tighten their purse strings. However, Salesforce's business is resistant to recessions because it helps companies automate repetitive tasks, optimize their sales and support teams, reduce their overall dependence on human employees, and make data-driven decisions.

In other words, companies will turn to Salesforce when they need to cut costs and boost their efficiency. That demand should continue rising regardless of the macroeconomic challenges. If we look back at Salesforce's revenue growth, we'll see how easily it weathered previous recessions.

In fiscal 2021, Salesforce's revenue rose 24% as companies continued to access its cloud services throughout the COVID-19 pandemic. Those robust growth rates indicate Salesforce's evergreen business should easily survive the next economic meltdown.

3. Its stock is still reasonably valued

Salesforce's stock trades at nearly 60 times forward earnings and nine times this year's sales. Those valuations might initially seem frothy, but they're quite low for a cloud-based CRM stock.

Salesforce's cloud-based CRM peer Veeva Systems (VEEV -1.91%), which focuses on life science companies, also expects to more than double its annual revenue from $1.5 billion in fiscal 2021 (which ended this January) to $3 billion by calendar 2025. However, Veeva's stock trades at nearly 80 times forward earnings and 27 times this year's sales.

Is it too late to buy Salesforce?

Salesforce's stock underperformed the S&P 500 this year as concerns about its recent takeover of Slack, which will throttle its near-term earnings growth, overshadowed its long-term growth potential.

However, I believe Salesforce remains one of the market's best tech stocks. It dominates its core CRM market, its newer cloud services continue to expand, and it's firmly profitable by both GAAP and non-GAAP measures. Its evergreen business is well-insulated from economic downturns, it's presented investors with an upbeat outlook for the next five years, and its stock is still cheap relative to those of its peers.

All those strengths suggest it isn't too late to buy Salesforce, since the company could still have plenty of room to expand over the next several decades.

Salesforce Spent $1.7 Billion on Buybacks. It Has Nothing to Show for It.
358%