Most consumers don't like making compromises, but we investors should all be looking for well-balanced names like Broadcom.

While most people put enough thought into their stock picks, not too many investors think as carefully about the sort of account used to make these purchases. And to be fair, it mostly doesn't matter much of the time -- you're either paying taxes now or paying taxes later. For most of us, it's all ultimately meant to fund a nice retirement.

However, there are some scenarios where a particular pick makes more sense in one type of account as opposed to another. Broadcom (AVGO -1.70%) is one of those picks. It's a solid all-around growth holding, but it's especially well-suited for Roth IRAs (individual retirement accounts) owned by people of all ages. 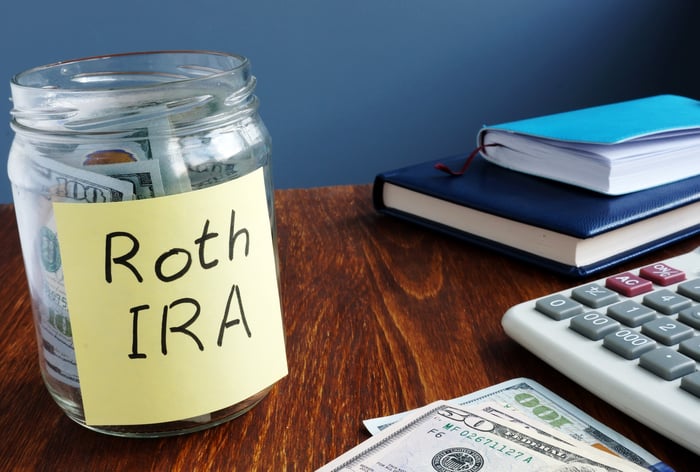 For the unfamiliar, Broadcom offers a variety of networking and communications technologies, enterprise software, and data center solutions. It's a respected name but nothing that truly excites investors.

There's something to be said, however, for technology that's a little bit boring. That is, it's also (usually) perpetually marketable regardless of the economic or competitive environment. Companies always need cybersecurity help, and consumers are forevermore going to rely on their smartphones.

This idea is evident in the company's results. Even with the logistics headaches prompted by the COVID-19 pandemic, Broadcom managed to generate more revenue in 2020 than it did in 2019, extending a long-standing trend. 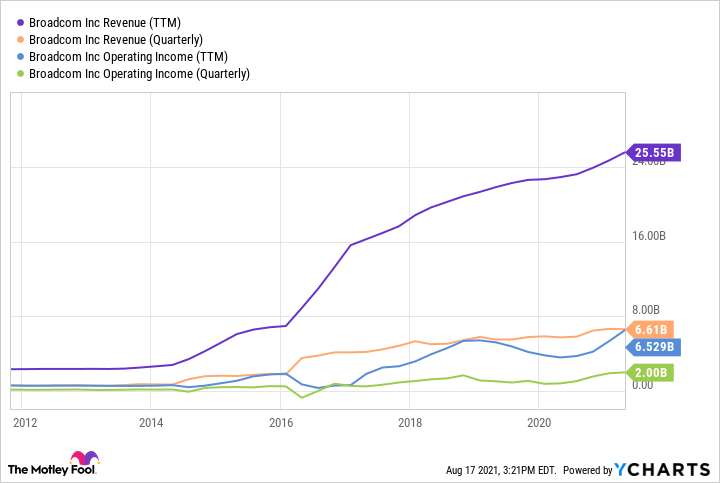 Operating income obviously ebbed slightly last year, but only slightly. The bottom line's bigger trend remains decidedly bullish following 2016's pairing of Broadcom and Avago. The then-combined company bought CA Technologies in 2018 and acquired cybersecurity name Symantec in 2019. These accretive deals have given the ever-expanding outfit an ever-increasing number of ways to extract more sales from existing customers as well as add new ones to the mix. By extension, it has bolstered profits.

Largely lost in the noise of all the acquisitions, however, is how Broadcom has evolved into a solid dividend option since the M&A (mergers and acquisitions) spree got going with the Avago deal.

The graphic below tells the tale. Since 2016, Broadcom's quarterly dividend has improved from $1.02 per share to $3.60. The current payout translates into a trailing yield of just under 3%, above average given the S&P 500's current average dividend yield of 1.3%. It's downright huge in light of the technology sector's typical disinterest in shelling out quarterly payments. 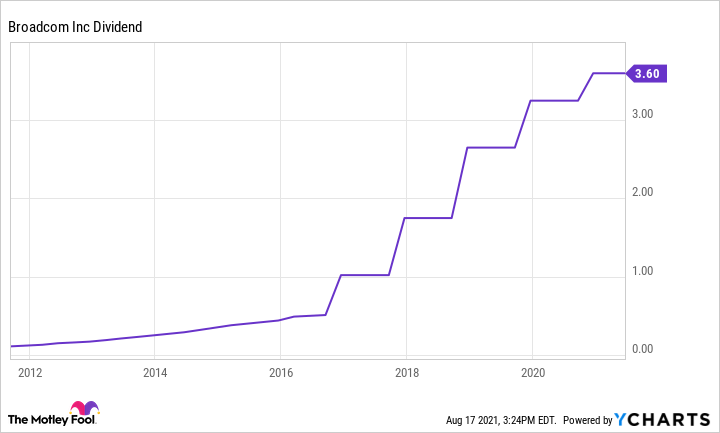 The healthy respect for sharing part of the company's current revenue stream is, in many ways, a reflection of its changing business model.

See, software is increasingly "rented" as an ongoing service rather than purchased, and it's increasingly accessed via the cloud instead of using an app installed on a machine. Of course, Broadcom sells hardware too, but technologies like its Wi-Fi solutions and its PCI-based storage and switches are almost disposable these days due to their low costs and constant calls for upgrades.

And lest you think you're settling for a low-growth component supplier, know that this year's recovery is projected to drive sales growth of 14% for the company, followed by revenue growth of nearly 6% next year. Earnings should grow even more.

So Broadcom's got the chops, but why a Roth IRA?

It's not a bad pick for any particular retirement account, to be clear, or even a brokerage account that isn't tax-sheltered. But, it's particularly well-suited for Roth IRAs for a couple of different-but-related reasons.

One of those reasons is sheer balance.

Think about it. Many of the very best stocks require an investor to choose growth or income. Take Apple as an example. It's arguably the world's greatest company, but with a dividend yield of only 0.6%, it's going to leave income-seeking investors wanting more. At the other end of the spectrum is a consumer goods name like Kraft Heinz. Its present dividend yield of 4.2% is clearly superior to Broadcom's, but the company will do well to barely outgrow inflation in the long run. Broadcom lies somewhere in the middle of those two extremes, however. As a result, the stock isn't prone to huge swings or disappointing performance... something you definitely don't want to see within a retirement account.

The other related reason Broadcom is such a smart pick for Roth IRAs is that you won't necessarily have to sell any of it to start living off of it when that time comes since it's already paying good dividends! Instead, you may simply turn your DRIP (dividend reinvestment plan) off and start sticking those cash payments in your own pockets. Until then, you can use Broadcom's dividends to buy more shares or use those dividends to accumulate cash used to purchase other stocks.

Both nuances are bigger deals than most investors might appreciate.

See, with Broadcom's lineup of always-marketable technologies and its balance of growth and dividends, this is a stock you can reasonably count on to recover from temporary setbacks. Ergo, this limits the prospect of being forced to sell it at a loss within an IRA, which offers you no tax benefit whatsoever. And yet, even while the stock's price may be suppressed, it will continue to drive dividends you can withdraw -- tax-free -- and live on as they're paid.

Bottom line? This sort of "boring," income-producing, steady-growth investment is the sort of pick that keeps a lot of future and current retirees out of trouble by virtue of its flexibility and reliability. At the very least, it's worth a closer look.