Pinterest is building the digital commerce platform of tomorrow.

Two decades ago, commerce looked much different than it does today. Jeff Bezos had already founded Amazon, but the inventory was relatively limited and e-commerce was still a novel concept. In fact, many people were quite skeptical.

Twenty years later, e-commerce has gone mainstream, and some early Amazon shareholders are millionaires. So, ask yourself this question: What will commerce look like two decades from today? Here's why I think Pinterest (PINS -3.74%) will play an important role in this industry. 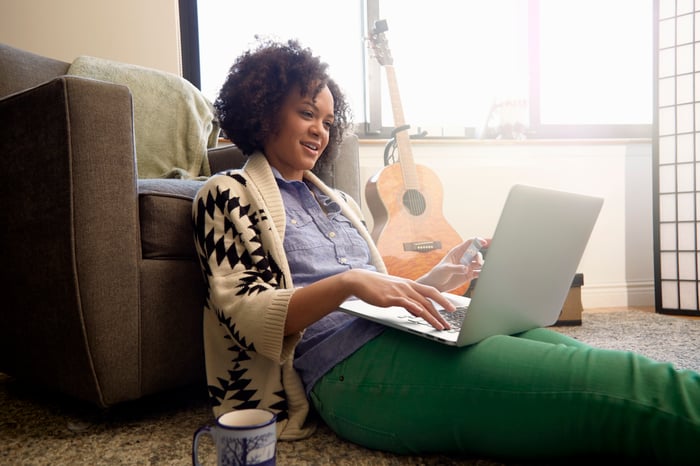 The future of commerce

Pinterest is often compared to social networks like Facebook or Snap's Snapchat. And while there are superficial similarities, the endgame is different. People use Pinterest to find inspiration, not to engage with friends and family. For instance, if you're looking for dinner party ideas, designer fashions, or details for a dream vacation, you'll find them on Pinterest.

However, this actually requires a second type of artificial intelligence (i.e., computer vision), which allows the platform to recognize objects within media content. And that brings me to my point: By blending machine learning, computer vision, and user-curated collections of media content, Pinterest is a unique platform, unlike any other social network, marketplace, or search engine.

In fact, I think Pinterest is building the commerce platform of tomorrow. Consider this: Let's say you search Pinterest for "summer fashion," and you find a shirt you like; Pinterest can help you find out where to buy it. And later this year, the company will debut on-platform transactions, meaning you'll be able to purchase that shirt directly through Pinterest. But that only scratches the surface of what this platform could be.

Going back to your search results, let's say you notice the denim model is wearing nice shoes. You can actually zoom in on the shoes, and Pinterest will use its AI engine to find the product (and visually similar items). Now you can buy those shoes, or something similar, even if you don't know the brand. Better yet, let's say you see someone wearing the shoes in real life (or elsewhere on the internet); you can snap a picture with your smartphone, or otherwise upload that image to Pinterest, and get the same result.

Now, imagine the potential of blending Pinterest with augmented reality (AR) glasses in the future. Wherever you go, whatever you see, it would all be shoppable.

The value for brands and marketers

According to Sprout Social, 89% of people on Pinterest are actively looking for inspiration, but 97% of searches aren't brand specific. Put another way, the vast majority of users have commercial intent, but they don't have a specific product in mind.

That creates a perfect opportunity for branded advertising -- and of course, Pinterest has the first-party data to personalize those ads. Likewise, because most users are looking for ideas, ads blend organically into the platform. That's not true for social networks like Facebook or Snapchat. As a result, ads on Pinterest yield twice the return on investment as compared to other social media.

That value proposition has been a powerful growth driver, despite a sharp deceleration in monthly active users during the most recent quarter.

Looking ahead, Pinterest is well positioned to build on that momentum. Specifically, on-platform transactions could be a game changer. By simplifying the checkout process for consumers, Pinterest should drive more conversions (i.e., purchases) for brands, reinforcing its value to advertisers.

But here's the most exciting part: As more brands find value in Pinterest, they will bring more content (and ads) to the platform. This should incentivize more consumers to shop on Pinterest, allowing the company to capture more data for its AI models. That, in turn, will make the user experience even better, while also helping brands target ads more effectively.

Twenty years from now, this flywheel might turn Pinterest into an AI-powered digital mall, one that could theoretically contain almost any product from any brand in the world. Put another way, Pinterest could be the operating system that powers commerce in the future. That's why I think this stock could grow tenfold in the next decade or two.