Please ensure Javascript is enabled for purposes of website accessibility
Log In Help Join The Motley Fool
Free Article
Join Nearly 1 Million Premium Members And Get More In-Depth Stock Guidance and Research
By Jon Quast, Keith Noonan, and Will Ebiefung – Aug 21, 2021 at 7:00AM

It's better to buy shares of companies with great long-term prospects than to hope for good luck trading questionable opportunities.

A penny stock is typically a company with a low price per share and dubious long-term prospects. And yet, despite being questionable businesses, penny stocks attract scores of investors every single day. The allure is understandable. Everyone would love market-crushing returns in a short amount of time, and penny stocks seem like the best chance. Of course, some people do get lucky trading penny stocks, further elevating the hopes of new investors.

However, some stocks offer penny-stock traits (low share price and high growth prospects) but are much better businesses and, therefore, better buys. Three Motley Fool contributors think investors should consider investing in European Wax Center (EWCZ 1.03%), Ubisoft Entertainment (UBSFY -0.84%), and Skillz (SKLZ -1.05%) over penny stocks. But if you're interested in market-beating gains, you'll need to adjust your investing time horizon to buy and hold for the next five, 10, and even 15 years. 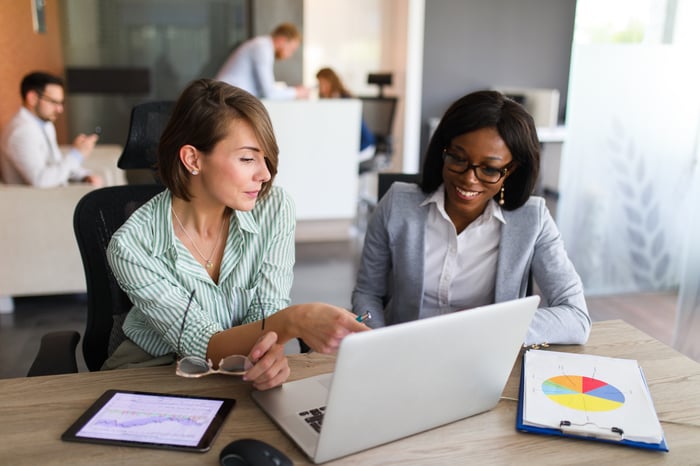 A small-cap with a 15-year runway

Will Ebiefung (European Wax Center): European Wax Center operates a chain of waxing salons, making it a great way to bet on the continued popularity of personal care in the United States. With a tiny market cap of just $650 million and a healthy growth rate, this small-cap company is an excellent alternative to risky penny stocks.

Analysts expect the global hair removal wax market to expand at a compound annual growth rate of 8.1% to $16.9 billion by 2027. And European Wax Center can exceed the overall market by leveraging its unique franchise-based business model. Instead of managing all its centers, the company relies on a network of independent entrepreneurs to handle the day-to-day running (and 99% ownership) of the salons.

As of March, 803 of European Wax Center's 808 locations are franchises, giving it an asset-light business model and potentially supercharging growth. The franchise owners benefit from the company's recognizable brand and economies of scale when buying supplies.

First-quarter revenue jumped 12% year over year to $36.7 million -- with 56% of that coming from product sales to the franchises. Management expects to quadruple its salon count within the next 15 years, and now is a great time to get in on the ground floor of this long-term opportunity.

This game company can still be a big winner

Keith Noonan (Ubisoft): Many large video game publishers have benefited from heightened engagement during pandemic times, but Ubisoft's stock performance has been relatively weak across the stretch. The company's share price is down 13.5% from the start of 2020 and roughly 44% from the 52-week high it hit earlier this year.

While the company's Assassin's Creed franchise still looks pretty strong, properties including Ghost Recon and Rainbow Six haven't been living up to growth expectations, and investors have gotten antsy amid the mixed performance. The France-based games publisher has admittedly failed to match the output of industry competitors including Activision Blizzard and Take-Two Interactive in recent years, but Ubisoft stock looks cheap at current prices, and the company could go on to crush the market's expectations.

Despite underperformance and delays for some key releases, Ubisoft still has a relatively strong collection of game development studios and bankable properties. Activision Blizzard's Call of Duty: Mobile has shown that bringing triple-A gaming franchises to the mobile market can create huge new revenue streams without diluting the core property, and Ubisoft will have opportunities to reinvigorate some of its properties if it delivers strong mobile and free-to-play releases. The publisher is also still in the early stages of capitalizing on potential growth trends including esports, augmented reality, and in-game advertising.

You won't find many people making the case that Ubisoft is the strongest company in the gaming industry, but the stock is presenting attractive value at current prices, and it could post huge returns for shareholders who play the long game.

This gaming platform is down but not out

Jon Quast (Skillz): I feel for anyone who's held shares of Skillz over the last six months. The stock is down an excruciating 75% from its high.

I believe it's fair to say that Skillz stock was overhyped relative to its near-term prospects. Remember, this company went public in December via a special purpose acquisition company and SPAC mergers are negotiated based on a $10-per-share valuation. Considering Skillz management agreed to the valuation at the time of the merger, the $10 price tag should be considered generous. But by February, Skillz had already quadrupled from this generous valuation. Therefore, it's not surprising to see it come back down to earth.

Here's the thing: As a business, Skillz still has a lot going for it. But creating shareholder value takes time. Investors should remember that this company has been public for less than a year and the business hasn't had enough time to create enduring, multibagger shareholder value yet. But those willing to hold for the long term (five years or more) may still see Skillz stock soar to new heights.

One potential catalyst is Skillz's partnership with brands. In the future, management envisions companies building brand awareness by having competitive games with cash payouts. Skillz's partnership with the NFL is an early test to see if this vision will come to fruition. The company recently selected 14 game developers as semi-finalists in its NFL branded game launch. However, it could still take around a year before the game is ready. Therefore, investors need to be patient.

A nearer-term catalyst may be something called "synchronous" gaming -- games that can played in real time. Skillz currently has games in a limited number of genres because it can't support real-time competitions. Right now, users play turn-based games. However, the company just partnered with Exit Games to accelerate development of synchronous gaming. Once Skillz has this capability, it will fling the door wide open to more game genres and, therefore, more users.

In short, Skillz stock is down, but the company still has opportunities to create shareholder value. And now that it's fallen back to around $10 per share, the valuation looks a lot more attractive to someone willing to buy and hold for the long term.