There's a lot of buzz about meme stock prices possibly rocketing into space, but is there a real business there?

Meme stocks hit the mainstream earlier in 2021 when aggressive stock and options buying led to a gamma squeeze and subsequent collapse of GameStop (GME 3.46%) stock. What sets meme stocks apart from ordinary investments is that the meme stocks tend to depend on viral buzz or community interest, rather than business fundamentals or prospects, to drive their share prices.

That somewhat dubious foundation raises a key question -- could a meme stock really be worth buying for the business? We asked three successful investors to pick a meme stock that they believe might be worth buying. They selected the NextGen AI US Sentiment Leaders Index (BUZZ 0.19%), Virgin Galactic Holdings (SPCE -1.15%), and UWM Holdings (UWMC 2.52%). Read on to discover why, and decide for yourself whether you think they're worth owning. 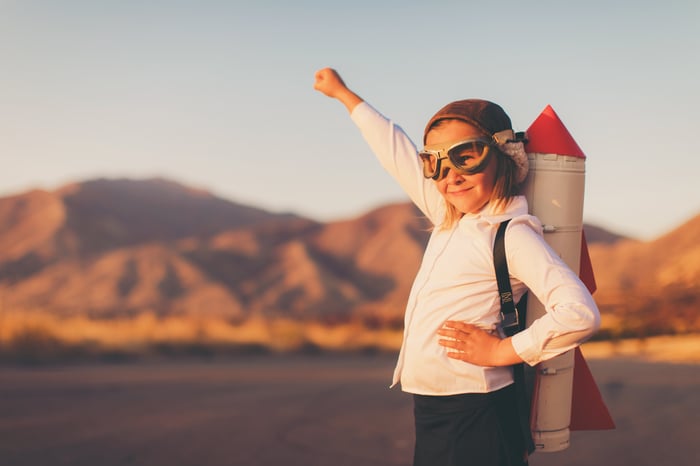 Taking advantage of the buzz while minimizing risk

Barbara Eisner Bayer (NextGen AI US Sentiment Leaders Index): As someone who's close to retirement, I don't like the idea of investing in stocks that are "fashionable" or "trendy." So investing in a meme stock is definitely not up my alley. On the other hand, I like great opportunities, and meme stocks offer that. But in order to reduce the risk of choosing a single stock, I would prefer investing in a meme exchange-traded fund.

Not only does an ETF minimize my risk because it holds a basket of individual equities, but I don't have to decide on my own which companies I think will succeed the most. Via the ETF, I'll own a small piece of many different companies, so if one meme stock tanks, it won't have a huge impact on the value of my investment overall.

The good news is that there's an ETF that covers meme stocks. It's called the NextGen AI US Sentiment Leaders Index and is managed by Van Eck Associates Corporation. It debuted on the public markets on March 4 with a goal of tracking hot stocks that are trending on social media. The index it uses was up 52.69% over the past 12 months, as opposed to 33.1% for the S&P 500.

Most ETFs buy an index and hold the companies therein until there are changes in the index itself. But this isn't your ordinary ETF. According to the ETF's managers: "[We] use AI to monitor 15 million online posts a month to measure which stocks have the most positive investor sentiment. Then, we rank the top 75 stocks each month to feature in the BUZZ NextGen AI US Sentiment Leaders Index."

While the stocks in this ETF need to have lots of mentions on social media to be included, you won't find some of the craziest Reddit stocks, because management requires that companies have a minimum market cap of $5 billion, and many those stocks don't qualify. However, you'll find some familiar equities in their top 75, like Tesla, Square, Amazon, and Twitter.

By holding many of these more established companies, the ETF has a little more stability.

While I'll be shying away from individual meme stocks, in general, I'm definitely going to consider adding BUZZ to the growth part of my portfolio to take advantage of internet stock buzz.

Putting some space in your portfolio

Eric Volkman (Virgin Galactic): For a fun meme stock that might also deliver quite a payload in the future, I'd take a flyer -- almost literally -- on Virgin Galactic.

As its name implies, Virgin Galactic is a space tourism company, one of the few that has the deep pockets, the technology, and the personnel to ferry paying passengers into the beyond (the two other prominent ones of the moment, Elon Musk's SpaceX and Amazon founder Jeff Bezos' Blue Origin, are not publicly traded).

Since this is an extremely limited market, to say the least, Virgin Galactic has enjoyed high interest and demand for its services. This seems to have given it the scope to up ticket prices considerably, to $450,000 per seat. Roughly 600 people have reserved space for space, so to speak, at the old level of $200,000 to $250,000 apiece on future Virgin Galactic flights.

Outside of a handful of test flights (one of which took founding father Richard Branson), the company hasn't actually carted anyone into space yet. Spaceships are expensive to build and maintain, of course, and astronauts and qualified engineers aren't exactly low-salary employees. So Virgin Galactic is a real red ink gusher on the bottom line. In its most recently reported quarter alone, it booked a $94 million net loss, and that wasn't even its deepest quarterly shortfall.

That said, the company is drawing handfuls of revenue here and there through activities like engineering services and delivering payloads for outside entities. Meanwhile, it has a big pile of cash to burn through (nearly $565 million, as of the end of said quarter). And since it's very effective at raising capital through frequent issues of new stock, there's more where that came from.

Ultimately, Virgin Galactic's vision is that its "spaceports" will dot the globe, with would-be astronauts flocking to them to take pricey (albeit brief) trips into space.

And the company clearly intends to do more than just sell them an expensive seat on a space cruise. Earlier this year it hired former Walt Disney imagineer Joe Rohde to be its "experience architect" to make the several pre-flight days unique and memorable for customers. This is a savvy, potentially value-adding move by the company; while competition isn't rampant in this rarefied business, it is there, and after commercial space flights begin ticket prices should start to feel the tug of gravity.

I should note that as both an early-stage company and a meme stock, Virgin Galactic can be extremely volatile and is therefore risky. But catching the shares on a downward trajectory could really pay off; space travel is an exciting, boundary-pushing activity. As such, it should attract an eager customer base for many years to come once commercial flights begin in earnest.

Can a moneymaking business really be a meme stock?

Chuck Saletta (UWM Holdings): While perusing the WallStreetBets subreddit as I was watching the GameStop saga unfold, I came across some remarkably well thought out analysis on mortgage originator UWM Holdings. While the company went public through a special purpose acquisition company back in January, the business has been around since the mid-1980s, and it is actually generating profits.

Even better, UWM Holdings pays a dividend of $0.10 per quarter, and a full year's worth of that dividend has already been covered by the $0.55 of basic earnings per Class A share the company generated in the first six months of 2021. That's some remarkably real cash generated and paid out by a business that has such a strong following on the ground zero site for so many meme stocks.

Still, at recent market prices, that $0.40 dividend does translate to a fairly hefty yield near 5.4%, which could start to explain where the meme-worthiness comes into play for the company. After all, as a mortgage originator, its operations are tied to the health of the housing market, and there are reasons to believe that that particular market may be seeing signs of trouble.

In addition to that business risk, the company has a complicated capital structure, including the possibility of some very heavy dilution if the stock price rises. Between warrants outstanding with an $11.50 strike price and privately held, super-voting, non-economic Class D shares that may start to get converted into the public Class A shares when price thresholds between $13 and $19 are reached, there are legitimate risk factors holding down its shares.

Yet in between the dilution risk from the capital structure and the operational risk from the mortgage market sits a real company that's generating actual value and paying out a decent chunk of that value to its shareholders. In researching the business, I found a story that was compelling enough that I was willing to invest a little bit of my own money, but not so compelling that I expect it to "rocket to the moon" in a true meme-like fashion.

Indeed, due in part to the dilution risk, I've sold call options at an $11 price point against much of my position. As a result, if the price does rise to where the dilution starts to become an issue, I'll likely be mostly back on the sidelines, reassessing it against the new reality. Until then, a better-than-5% yield is nothing to sneeze at, and if my shares are not called away by those options, I could potentially sell another round as the existing ones approach their expiration.

Is it worth it? You be the judge

Any company with a meme-like following has a risk that if the crowd's attention shifts, its shares can suffer. Still, if there's a strong enough business behind that stock, its shareholders may ultimately wind up successful in the long run no matter what the market does in the short term. When it comes to putting your own money at risk, it's up to you to make the call as to whether you believe our investors made compelling enough cases for you to consider investing in these meme stocks. Not every meme stock will rocket into space, but you just might find one that's actually worth your hard-earned money.

When Do Single Stocks Trump ETFs?