The hunt for the next biotech buyout play is apparently underway.

Adaptimmune Therapeutics (ADAP 1.98%), a clinical-stage biotech, saw its shares spike by as much as 10% in early morning trading Monday. Although the stock has cooled off somewhat in afternoon trading, its shares were still up by a healthy 8% as of 12:52 p.m. EDT Monday.

Adaptimmune's stock appears to be moving northward today in response to Pfizer's $2.26 billion buyout of oncology specialist Trillium Therapeutics. In short, investors are apparently on the hunt for the next buyout play in oncology. 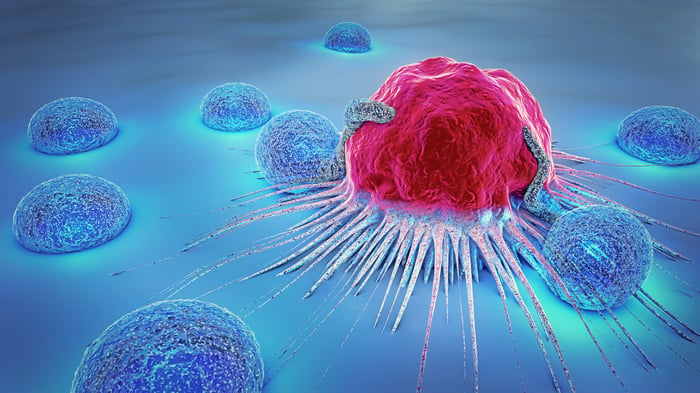 Adaptimmune has a number of features that might appeal to a big pharma. First off, the company is close to its first regulatory filing for afamitresgene autoleucel as a treatment for advanced synovial sarcoma. Although Adaptimmune's lead product candidate isn't expected to be a major revenue generator, a successful regulatory filing would go a long way toward validating its SPEAR (Specific Peptide Enhanced Affinity Receptor) platform. So, if everything pans out in the clinic and on the regulatory front, the biotech's novel platform might prove to be too valuable to pass up for an asset-hungry big pharma.

Second, Adaptimmune's current market cap of $639 million pales in comparison to the latent value of its overall pipeline (again, assuming the technology is ultimately validated). This promising biotech, in turn, could probably be bought for less than $2.5 billion right now. That's a relatively small capital outlay for most big pharma companies. Pfizer in particular is swimming in cash at the moment thanks to its COVID-19 vaccine, meaning that the pharma giant might be willing to gobble up multiple small- to mid-cap oncology companies.

Is Adaptimmune's stock worth buying on this takeover hype? Biotech investors should arguably never buy a stock solely for its potential as a buyout candidate. Most of the time, acquisitions in biotech come out of the blue, after all. That being said, Adaptimmune does have a busy schedule in terms of clinical and regulatory catalysts over the next 12 months. So there's a decent chance that this small-cap cancer stock could take flight in the not-so-distant future. Therefore, aggressive investors comfortable with high levels of risk might want to check out this name soon.