The stock market has been on a strong run lately, and investors kept the momentum going on Wednesday morning. Even with companies starting to pay closer attention to the surge in COVID-19 cases from the delta variant, market participants are happy with the rebound they've seen in the economy. As of 11 a.m. EDT, the Dow Jones Industrial Average (^DJI -1.03%) was up 65 points to 35,431. The S&P 500 (^GSPC -1.44%) picked up 5 points to 4,492, and the Nasdaq Composite (^IXIC) rose 2 points to 15,022.

Earnings results continued to provide some upward support for markets, and Dick's Sporting Goods (DKS 1.16%) was a big winner on that front Wednesday morning. Meanwhile, Boston Beer (SAM -5.21%) continued to move lower as more investors weighed in against the Sam Adams beer maker.

Shares of Dick's Sporting Goods were up 16% on Wednesday morning. The sporting goods retailer announced some impressive financial results and pointed to better times ahead while also rewarding shareholders with a big payout. 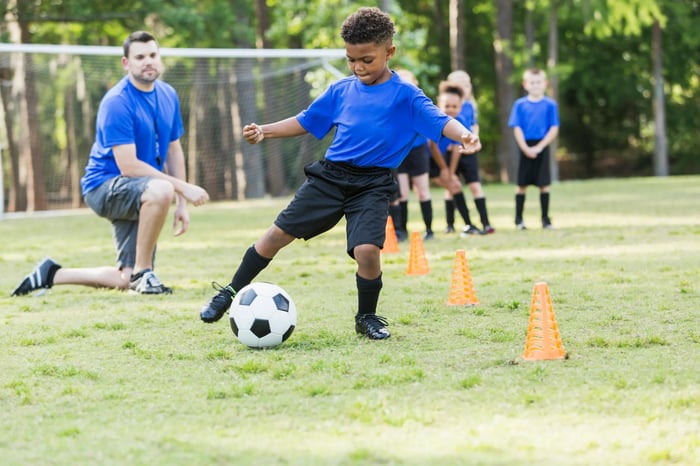 The numbers from the company were strong. Dick's reported record sales for the second quarter of 2021, with same-store sales up 19.2% from year-ago levels and lifting overall revenue almost 21%. Total sales were up 45% from where they were two years ago, showing that the pandemic hasn't really caused any pause at all in Dick's long-term growth trajectory. Earnings jumped 58% year over year to $5.08 per share.

Moreover, Dick's sees a lot of good things happening for the rest of the year. The company boosted its earnings guidance for 2021 on the whole, now calling for adjusted numbers of $12.45 to $12.95 per share. Same-store sales for the full year should rise between 18% and 20%.

Best of all for shareholders, Dick's announced a special dividend of $5.50 per share. That'll effectively boost the dividend stock's current 1.3% yield by about 4 percentage points. Investors were happy to take the money, but they also see further growth ahead for a stock that still trades at less than 11 times its guided earnings estimate for 2021.

Meanwhile, shares of Boston Beer fell 7%. The move downward added to massive losses in the past couple of months, as Wall Street analysts piled on with negative views on the beer stock.

Boston Beer took a double hit on Wednesday. Analysts at Goldman Sachs cut their price target from $875 to $750 per share, maintaining their neutral rating on the stock.

However, more aggressively negative comments from Cowen provided an even direr picture of Boston Beer's future. Cowen downgraded the stock from market perform to underperform and slashed its price target by more than half from $825 per share to $400. The Wall Street analyst stated that it suspects 2022 earnings per share could come in as much as 30% below where most of those following the stock see it, largely because the booming hard seltzer market has started to slow down amid greater competitive pressure.

The big drop has wiped out Boston Beer's gains for the past 15 months. If analysts are right, though, this could be just the beginning of a longer-term trend lower for the beer and hard seltzer specialist.