It intends to make Workplace and Workrooms the foundation of a growing enterprise offering.

Mark Zuckerberg has built the largest social network in the world, but that won't be the end of Facebook's (META -0.74%) evolution. Now, the company is trying to work its way into the enterprise market, too. It has the Workplace platform for businesses, a communication tool for teams, and is trying to make that the center of a much larger offering.

Not only is Workplace available for businesses, it's at the center of Oculus for Business, the company's enterprise VR offering. And with the recent announcement of Horizon Workrooms in VR for collaborating in a business setting, Facebook is trying to become an indispensable enterprise application. The goal is ambitious, but it may not be an easy sell. 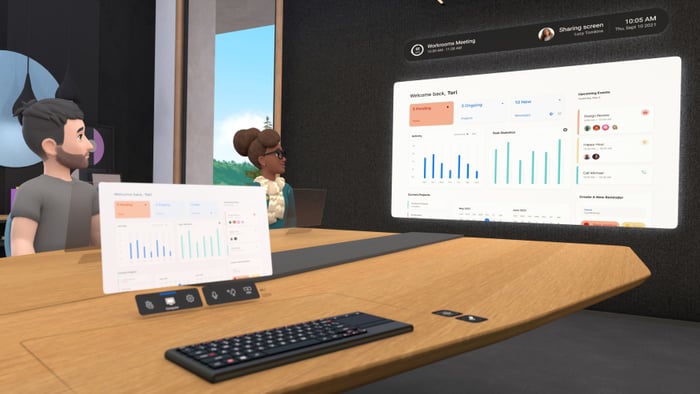 Workrooms provides virtual conference rooms in which people inside or out of VR can meet and present or collaborate on digital content. Users can bring in assets like images, videos, or PDFs. Right now, Workrooms seems like a stand-alone app, but that may not be the case for long as Facebook tries to tie all of its enterprise products together.

There are a couple of likely goals for Workrooms from Facebook's perspective. One is to create a clear enterprise use case for virtual reality. If businesses want to have people meet remotely in a virtual space, why not do so in a platform built natively for the Oculus Quest 2 headset?

The second benefit is that an enterprise use case could help increase consumer adoption of VR. The PC benefited from being a work tool -- that it found its way into homes was an ancillary benefit. In short, if Facebook can dominate VR for consumer use and enterprise, it'll likely win the VR market.

Here's what we know about Oculus in the enterprise setting and Workrooms as of today.

By all accounts, Workrooms offers a great experience, and users can bring in a keyboard and screens from their computer. These capabilities are available on other VR tools, but Facebook is trying to take VR collaboration to the masses, and it's using its huge user base as a jumping-off point. If it can hook enterprises into Workplace along the way, that's great.

It's not often that disruptive technology comes from a leader in the industry that's being disrupted. And that's where I think history can offer some clues about what to look for as Facebook tries to build out its VR and enterprise businesses simultaneously.

It's also not uncommon for an industry leader to see disruption coming, only to whiff on the product it makes for that new disruptive market because it's stuck trying to hold onto the products that made it successful in the first place. Here are just a few examples:

What I question about this integration between Facebook's products is whether the company is trying to shove a social network into newer technologies like VR and virtual collaboration. The tech giants mentioned above tried to link their legacy cash cows with their disruptive efforts, and the results were uninspiring. If Facebook does something similar, it could hamper this effort at innovation.

Nor is this space lacking in competition. Apple is working on VR and AR headsets, Microsoft has the Hololens AR product and some VR headsets that it has built with partners, and HTC's Vive headsets are the current leader in enterprise.

But beyond all of that, there's one more big reason I think this enterprise push into VR and collaboration may not get the traction Facebook hopes.

One challenge in getting any enterprise to sign up for a new service is making it feel confident about security. Companies want to know that their data is secure, and Facebook has a questionable history, at best, in terms of keeping data private. It knows this, which explains why the company made a point of spelling this out in a blog post on the Oculus website:

Workrooms will not use your work conversations and materials to inform ads on Facebook. The audio contents of your meeting are processed on Facebook servers but not stored, unless someone records and sends us a clip as part of a report. In this case, we'll use the information to take appropriate action and then delete the recordings. Finally, Passthrough processes images and videos of your physical environment from the device sensors locally. Facebook and third-party apps do not access, view, or use these images or videos to target ads.

Obviously, Facebook is trying to get out in front of concerns about data in Workrooms since users of the platform could be sending their screen, sensitive documents, conversations, and even their keyboard data to Facebook. It's a sensitive topic, to say the least.

Let's keep in mind that even if Facebook starts with the best of intentions, it has changed the rules before, especially in VR. Here are a few of the notable promises Facebook and Oculus founder Parmer Luckey made when Facebook acquired Oculus -- and how Facebook broke them.

Beyond those broken pledges, Facebook has a history of scandals like Cambridge Analytica, fake accounts, inflating view metrics, and data hacks, just to name a few. For business customers to be willing to sign up for Facebook enterprise accounts, they'll need to trust that they won't be tracked in some way, and that the rules of engagement won't change in the future. And Facebook may have a tough time convincing them to believe that.

There's lots of competition in VR

Facebook is clearly betting a lot on virtual reality, and it may be seeing that the enterprise market is a key to building out the technology and building critical mass. Companies are more likely to spend a few hundred dollars on a headset that adds value in tangible ways, and with more companies having a significant share of their employees working remotely, the demand for virtual meeting spaces should grow. But Facebook isn't the only game in town.

Microsoft is a likely competitor with the Teams platform, its own AR and VR tools, and arguably the most critical enterprise software suite. Apple could also enter the market with a headset, and it enjoys a sizeable network of users and enterprise customers. There are also well-funded VR software companies like The Wild and Spacial, which are developing collaborative tools, and building their ecosystems from scratch.

Enterprise isn't a sure win for Facebook in VR, and history suggests it will have stumbles along the way. Only time will tell whether the company will be able to reinvent itself and give up some of the features and tools (like tracking and ads) that made it successful in social networking in order to succeed in enterprise software. But it's the kind of transition that has been tough for tech companies to make in the past.