The stock's been a wild ride for investors all year, and it's dropped more than 50% in two days. What's going on, and why am I bullish?

The cause of all this volatility is Cassava's new drug for Alzheimer's, simufilam, which is in clinical trials. So far, the phase 2 trials have caused a lot of excitement. And now we're seeing various bear attacks trying to drive the stock down after its huge surge.

What's the stock going to do next week? I have no idea. But I do have some strong opinions about the citizen petition filed with the U.S. Food and Drug Administration this week to stop the clinical trials of Cassava's drug, simufilam. Specifically: It's ridiculous. The citizen petition was filed by a law firm that said on Aug. 26 in a press release that its clients have short positions in Cassava. Long story short, the action is motivated by financial reasons and has no interest fin helping people with Alzheimer's. Here's why I feel this way. 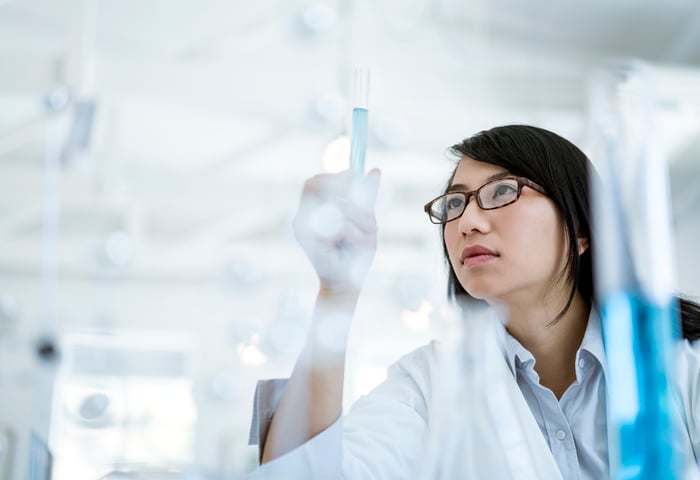 1. The point of a clinical trial is to assess whether a drug works

The pharmaceutical industry is heavily regulated by the federal government, specifically by one agency: the FDA. As part of this regulation, the government requires that drug companies perform clinical trials in human volunteers before the drugs will be allowed on the market. The purpose of these clinical trials is to assess safety and efficacy.

Occasionally the FDA will call a halt to a clinical trial. Why? Because sometimes a drug is shown or suspected to be unsafe, and thus dangerous to test in people. If, for instance, a person dies during a clinical trial, the FDA might halt the trial while the death is investigated. So it would be completely reasonable to file a citizen petition if you thought a drug was dangerous, and the volunteers taking the molecule might be harmed by it.

That's not the case here. The safety profile of simufilam is very strong. As the company reported a few weeks ago:

The safety profile of simufilam in the interim analysis is consistent with prior human studies. There were no drug-related serious adverse events. Adverse events were mild and transient.

Contrast this pristine safety record with that of Biogen (BIIB -1.54%), whose recently approved Alzheimer's drug has been linked to brain bleeds in some patients. There are no comparable safety issues with Cassava's drug.

In other words, the argument that we need to halt this clinical trial to protect people with Alzheimer's doesn't exist. In fact, if you read the citizen petition you will see that even the people trying to halt the clinical trial do not bother alleging there are any safety issues with the drug.

So why halt the clinical trial?

The citizen petition alleges that the drug won't work. Yes, I've heard that before. Every Cassava bear in the woods thinks the drug won't work. That's why clinical trials are so important -- to find out if a drug actually works. Alzheimer's patients and their families are desperate for new medications. There are people who will take Biogen's new drug, even with the risk that it might cause brain bleeds. That's how desperate people are, and how hopeful they can be about any new medicine that might help.

So why on earth would anybody try to stop the clinical trial of a drug like simufilam, that's so far proven to be safe? Cassava, and the FDA, and the medical community, and people with Alzheimer's, and their families all want to know whether this drug actually works. The whole point of a phase 3 trial is to validate the science.

The law firm, Labaton Sucharow, said that it represents clients who have a short position in Cassava. These anonymous clients are trying to halt a clinical trial of an Alzheimer's drug that hasn't harmed anybody. But what's clear from the safety data -- and the petition itself -- is that nobody is worried about the safety profile of the drug. The petition itself asserts that its only concern is whether the drug works.

Cassava's management has said this is "bogus," and I agree. People who actually want to know whether a drug works count on the FDA to run clinical trials to validate a company's claims. Why try to short-circuit that process? It's almost as if the short sellers are trying to keep us from knowing if the drug works or not.

Regardless, I very much want Cassava's phase 3 trial to happen. Yes, my family owns shares of Cassava, so I'm biased. But you know what I'm not doing? Filing a citizen's petition with the FDA to halt the phase 3 trial and immediately put the drug on the market.