These three companies have what it takes to grow your investment dollars over the long term.

It's not something most investors realize, but investing in the right stocks can make you wealthy over time. The key is to have the discipline to stay the course, even if businesses within your portfolio surprise you with the occasional negative earnings report. I'd argue that if you own a bunch of great companies, more often than not, they tend to surprise you.

Here are three stocks that, if held over many years, could easily multiply your wealth. 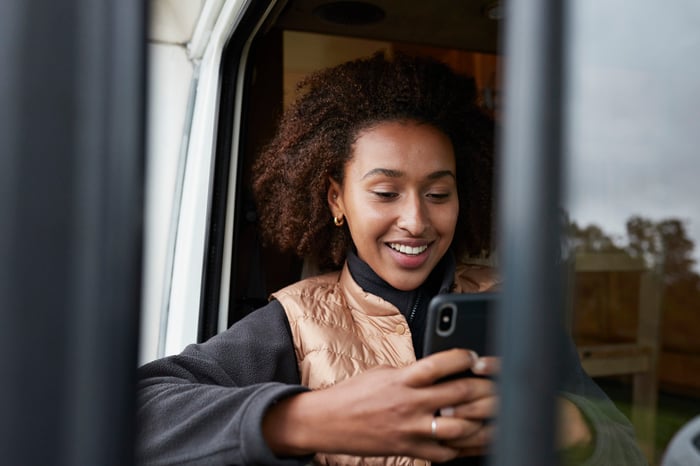 Facebook (META -6.79%) occupies a dominant position within the social media space. Its ownership of chat service WhatsApp and picture- and video-sharing site, Instagram, have only helped the company expand its reach into different customer demographic segments. Since the founding of the company in 2004 by CEO Mark Zuckerberg and its subsequent listing in 2012, the social media giant's share price has risen nearly 10-fold.

The company is still chalking up impressive numbers as evidenced by its fiscal 2021 second-quarter earnings report. Total revenue jumped by 56% year over year to $29.1 billion while operating income more than doubled year over year to $12.4 billion. This was driven by increases in the number of ads delivered, as well as a jump in the average price per ad. Net income surged from $5.2 billion to $10.4 billion.

Daily and monthly active users also continue to climb. The former statistic has increased from 1.6 billion two years ago to 1.9 billion, while the latter has risen from 2.4 billion to 2.9 billion over the same period. Facebook, however, isn't content with just advertising revenue -- it has also spent a considerable amount of money on virtual reality (VR).

There's a solid reason for doing so. The company plans to eventually launch the "metaverse," a virtual world where people can interact with one another using VR gear. The launch of Horizon Workrooms is the first step toward that reality, as colleagues can "meet" in a virtual conference room similar to having a physical meeting.

There's probably no better company to represent the online payment sector than PayPal (PYPL -1.89%). PayPal helps to connect customers and merchants and makes it much easier to transact online. The company not only allows secure digital transactions to take place, but also provides a digital wallet (Venmo) where users can store money and cryptocurrencies. The pandemic had accelerated the growth of the company, allowing it to report its strongest year on record in 2020.

This growth has carried into 2021. Net revenue grew by 19% year over year for the second quarter, led by 40% year-over-year growth in total payment volume. A total of 11.4 million net new active accounts were added, bringing total active accounts to 403 million.

PayPal is not resting on its laurels, though. The company is coming up with new initiatives to boost its business further, with a "Buy Now, Pay Later" (BNPL) service just launched in Australia. This BNPL solution comes with no fees and is available at millions of online stores where the "PayPal" button pops up. So far, around 425,000 unique merchants and close to 4.2 million customers have signed on.

And in yet another boost for the cryptocurrency market, PayPal has launched a new service whereby its customers in the U.K. can buy, hold, and sell four types of cryptocurrency, the first expansion of this service outside of the U.S.

In line with the growth of the digital economy, more and more agreements are also being signed digitally. This is good news for DocuSign (DOCU -1.44%). For its fiscal 2022 first quarter ended April 30, total revenue climbed by 58% year over year to $469 million, of which $452 million was subscription revenue.

DocuSign's total customers have grown nearly three-fold, from 373,000 in the fiscal year 2018 to 988,000 as of the end of the quarter. Of these, enterprise customers have more than tripled during the same period from 43,000 to 136,000, reflecting the strong uptake for the company's services.

More importantly, customers with an annual contract value of more than $300,000 have grown to 673, while the net dollar retention rate stands at 125%. These numbers point to not just increased adoption, but also customer stickiness as they continue to spend more using DocuSign's platform.

The company has continued to enhance its product suite with new features such as data visualization tools and improved data verification. Such additions should help it to continue attracting new and existing customers, and enable it to continue growing its subscription revenue.

These three companies enjoy multiple tailwinds that will allow them to grow their revenue and net income for many more years. The pandemic acted as a catalyst to accelerate their business growth and this momentum should enable them to continue doing well. You'll be doing yourself a great favor by holding on to these winners over the long-term to enjoy steady share price gains in tandem with the growth of the business. By steadily adding on shares of these companies along the way, you can let your money compound and, one day, even be rich.