Supercharge your savings with these stocks.

If you want to find tomorrow's great companies that could significantly change your financial situation, look for companies that consistently post high rates of revenue growth. All the blue chip stocks that made early investors millions in returns were once fast-growing upstarts. 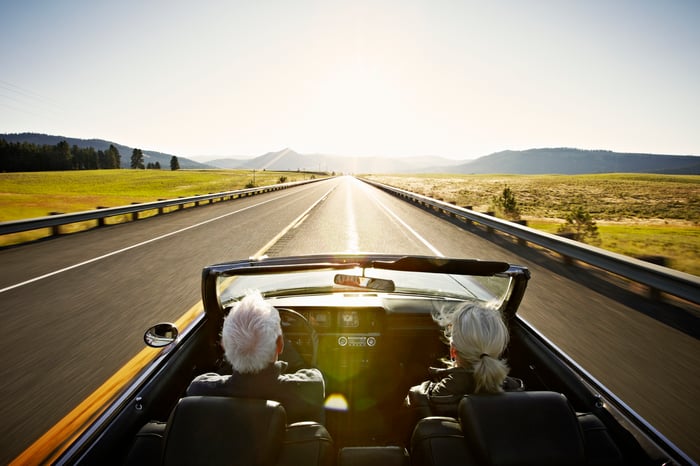 John Ballard (JD.com): JD.com is the largest retailer in China. It reported $114 billion in revenue for 2020, and revenue has more than tripled over the last five years. The stock has risen accordingly, but recent Chinese regulatory scrutiny on internet companies has brought the share price well off its 52-week high of $108. Based on JD.com's physical presence in China and expanding margins, this could be a great opportunity to buy shares of one of the leading e-commerce companies in the world.

China's regulatory environment has always been a risk, but this time the sell-off of Chinese tech stocks seems overdone. The recent inquiry by regulators has been aimed at so-called "platform" business models that primarily conduct business online, which doesn't entirely describe JD's business. During JD's second-quarter earnings call, management explained that the company's long-standing practice of doing business "the right way" and its physical presence of more than 23 million square meters of warehouse space across China should keep it in good standing with regulators.

"We believe that the regulatory goals are conducive to JD's long-term business growth," CEO Lei Xu said on the call.

Indeed, JD.com appears well positioned for continued success. In addition to its online presence, it operates a network of tens of thousands of physical stores, including pharmacies, supermarkets, convenience stores, and auto maintenance centers. This is a well-entrenched business that isn't going anywhere, with nearly 400,000 employees across its subsidiaries and affiliates.

What's more, management has done a great job at improving operating efficiency to push margins higher. In the second quarter, adjusted operating margin improved year over year to 3% from 2.2%. This translated to a 64% increase in adjusted earnings per share in Q2.

JD's margin across most sales categories is still lower than its competitors', which provides substantial upside for more earnings growth. The company reported a 26% increase in sales and added a record number of new active accounts in the second quarter. At a valuation of 0.95 times sales, JD.com trades at a significant discount to other leading e-commerce stocks and should be a great investment.

A huge opportunity in e-commerce

Jennifer Saibil (Etsy): You don't have to love handmade goods to be a fan of Etsy. The online marketplace for exclusive and vintage items saw skyrocketing sales during the pandemic, and its stock soared accordingly, gaining nearly 300% in 2020 alone. Sales and gross merchandise volume increased by triple digits year over year for most of 2020, and it added millions of buyers and sellers to its platform.

As global restrictions are easing, that phenomenal growth is starting to slow down. In the second quarter, sales increased 23% year over year, and gross merchandise sales, or GMS, grew 14%. But Etsy was still able to post double-digit growth in the face of tough comps from last year. That's pretty incredible. It remains a strong growth company with a $1.7 trillion market opportunity, and it posts a profit.

Here are some metrics that should help convince you that Etsy's still a great buy: Not only did it retain its millions of new pandemic customers, active buyers increased 51% year over year in Q2 and habitual buyers increased 115%. Buyers are also more active, with a 22% increase in average GMS per buyer over 2020. GMS per new buyer is accelerating, and it grew 24% in Q2.

The pandemic ushered in a new era for the creative marketplace, and Etsy's catching up with new features and plans. It's encouraging sellers to post videos, which is driving customer engagement on social media channels, and its tools are helping sellers offer more accurate expected delivery times. It's also expanding through acquisitions, which fortifies its assets, and it's still profitable.

Etsy stock is slowing down in 2021 after its remarkable climb last year, but it's up almost 14% year to date. It's not cheap, trading at 59 times trailing-12-month earnings. But that's fairly low for a growth stock.

Etsy has so much opportunity ahead, and a post-pandemic deceleration shouldn't blind investors to what kind of investment Etsy could be.

This social media platform is boosting cash from operations

Parkev Tatevosian (Pinterest): Pinterest is an image-based social media platform that lets users "pin" images to their profile and create custom boards. For instance, I have a boy's haircut board with images of different types of cuts that I let my son choose from when I take him to get his haircut. The use cases are broad, and it is helping attract millions of users to the platform.

Indeed, Pinterest boasts 454 million monthly active users, or MAUs, up 5% from the year prior. The company experienced a surge of new signups during the pandemic as people cooped up at home spent more time on their phones, tablets, and computers. From its fiscal second quarter of 2020 to fiscal first quarter of 2021, Pinterest added 62 million MAUs. The company has since shed 24 million MAUs as economic reopenings drew people out of their homes and away from their computers.

Still, management highlighted these were the least engaged users, and it did not affect revenue growth. And revenue did grow -- exploding 125% from the same quarter last year. Management expects revenue growth to slow in the next quarter to 40%. Looking over the long run, Pinterest is still in the early stages of expansion. Only recently did it start to focus on monetizing its international user base.

The average revenue per user, or ARPU, was $5.08 in the U.S. and just $0.36 internationally. As it builds out its international sales teams, expands its advertiser coverage, and gets better at delivering relevant ads, international ARPU can close the gap to the U.S.