Deciding to invest in BTC isn't the end of your crypto journey.

Most first-time crypto buyers agonize over whether or not to buy Bitcoin (BTC). But when you pulled the BTC buy trigger, you probably didn't count on the constant nagging worry about what to do next. Before you start obsessively checking prices or buying every token in sight, check out three game plans that could help you make your crypto journey a success.

Bitcoin has had an up-and-down year, and it's no stranger to volatility. Expect more of the same in the months ahead. But viewed over the longer term, its rise has been meteoric. With fiat inflation on the rise everywhere, and state attempts to create digital cash alternatives gathering pace, some advisors think Bitcoin will become a serious hedge against rising prices.

Tesla (TSLA 0.08%) and its crypto-loving CEO Elon Musk have taken an unusual approach to its Bitcoin investment. Although its $1.5 million BTC buy in February might have looked like a long-term investment strategy, that's not what the company said. Tesla claims it wants to use Bitcoin as a source of shorter-term liquidity -- and true to its word, when Tesla needed cash to fund its projects in March, it sold a small percentage of its BTC holdings at a favorable price. 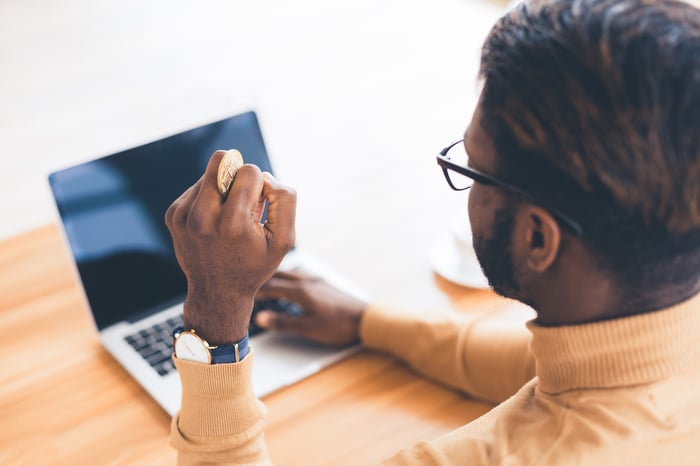 Central bankers like the Fed chief Jerome Powell and tech gurus like Square CEO Jack Dorsey refer to crypto as "a substitute for gold" or "a promising candidate for the internet's native currency." A lot of people think that the best thing about crypto is the fact that coins make an outstanding store of value -- a tool that could counter the forces of inflation, in the words of the Argentinian president Alberto Fernández.

Not everyone has Tesla or Elon money to throw about. But you could try to do the same thing on a more manageable scale with your own funds, particularly with inflation on the march. Perhaps BTC could help you with your own liquidity needs. Let it sit in your wallet and accumulate value until you need to break the piggy bank.

One thing to bear in mind if you adopt this strategy, however, is that at times of high market activity, Bitcoin's transaction fees can rise to prohibitive levels. But most wallets and exchanges will let you check transaction fees before you convert your coins to cash. Try to check fees at different times of the day: Sometimes fees drop when the busiest traders (usually those in the US or East Asia) are asleep!

Path No. 2: Delve deeper into the rabbit hole

Once you've set aside some Bitcoin, you may also want to explore the altcoins market. For instance, it's worth bearing in mind that Ethereum (ETH 0.57%), not Bitcoin, is the network of choice for a fast-growing number of NFT and DeFi projects. So if you think that those sectors are going to expand, consider widening your portfolio. ETH has actually outperformed BTC in 2021.

Respected analysts like Pantera and deVere predict this trend will continue. They point out that Ethereum is the go-to network for smart contracts, which could find widespread use in the world of conventional finance. Experts add that recent and forthcoming upgrades to Ethereum's network could help improve its performance and reduce its carbon footprint.

ETH is not the only altcoin that may be on the rise. Although Ripple executives are currently fighting a protracted legal battle with U.S. regulators over whether or not the XRP (XRP -1.12%) token is a security, both Ripple and XRP are finding a warm welcome in Asia. Its RippleNet platform processes transactions faster than many crypto networks, and Ripple has formed a solid partnership with the Japanese financial giant SBI Holdings (OTC:SBHGF). The companies' joint venture into cross-border payments, SBI Ripple Asia, is gathering steam all over the continent.

You could also check out Cardano (ADA 0.81%), which was developed by a former Ethereum developer, and has set itself up as a direct rival to ETH. Its developers are starting to experiment with solutions that would allow tokens created on the Ethereum network to migrate to the Cardano protocol. It is cheaper than ETH, and its proponents say that one day, it will be faster and more scalable, too.

This month, Cardano's Ada token made its Japanese debut on the Bitpoint trading platform. Big exchanges usually have quite stringent listing policies, a fact that investors can use to their advantage: If a token has been listed, it means a team of professionals has taken a close look at its specs and decided that it is worth adding to their trading platform.

Another, lesser-known token to consider is Klay, a token created by the South Korean tech giant Kakao. The coin has been listed on exchanges in South Korea as well as international exchanges like Binance and OKEx.

Kakao operates KakaoTalk, a smartphone chat app used by 87% of the South Korean population. And it has linked its Klay-compatible crypto wallet to that same chat app's interface. That could one day make it easy for Kakao to build up an ecosystem where the Klay token is the native currency.

Path No. 3: Do absolutely nothing

Imagine you keep a gold bar at home in a safe. Do you then spend your days and nights checking the price of gold? Or do you do the sensible thing and forget all about it until you really need it? Think of BTC the same way. Have some faith in your investment, and let BTC do its thing over the course of time.

Don't let inertia leave you hanging on the edge of the crypto market. But don't let FOMO enter your decision-making process, either. Hemming and hawing about whether you should go deeper in or selling your stake at the first sign of market anxiety isn't smart investing. And panic-buying more coins at the top of a bubble isn't a sustainable BTC ownership strategy. Pick one of the three above approaches -- and follow it with conviction -- and you'll enjoy greater odds of a successful crypto investment.

Fool contributor Tim Alper holds no financial position in any investments mentioned here. The Motley Fool owns shares of and recommends Bitcoin, Ethereum, Square, and Tesla. The Motley Fool has a disclosure policy.