There appears to be a great wall in China keeping BioNTech's vaccine out.

It's one of the most impressive rags-to-riches stories in the biopharmaceutical industry. Less than two years ago, BioNTech (BNTX -1.34%) had around $30 million in total annual revenue, all of which stemmed from collaborations. The German drugmaker was losing close to $200 million. And then came COVID-19.

BioNTech expects to rake in nearly $19 billion in sales this year from its COVID-19 vaccine. It posted a profit of around $4.6 billion in the first half of 2021. The company sits atop a growing cash stockpile that totaled nearly $1.1 billion as of June 30.

The messenger RNA (mRNA) vaccine developed by BioNTech has been shipped to more than 100 countries so far, including the U.S., Canada, and throughout Europe. But there's one key country missing from that list. Here's why BioNTech's COVID-19 vaccine is blocked from the world's biggest market. 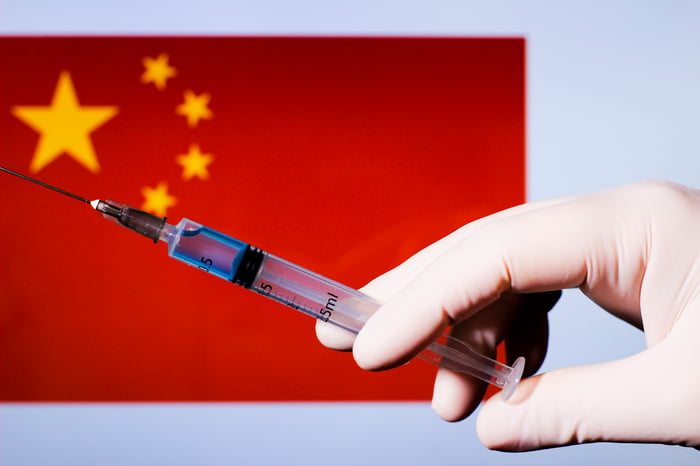 In 2018, Pfizer (PFE -0.40%) and BioNTech inked an agreement to develop mRNA flu vaccines. It wasn't surprising, therefore, that Pfizer turned to BioNTech to target the coronavirus as well. The two companies announced on March 17, 2020, that they were collaborating on the development of a COVID-19 vaccine.

But Pfizer wasn't BioNTech's first COVID-19 partner. One day before the deal with the U.S. healthcare giant was announced, BioNTech revealed that it had formed a strategic alliance with Shanghai Fosun Pharmaceutical to develop and commercialize a COVID-19 vaccine in China.

Unlike Pfizer, Fosun even put some skin in the game up front. The Chinese drugmaker agreed to buy over 1.58 million shares of BioNTech -- worth $50 million at the time.

BioNTech brought its BNT162 program to the table. Fosun had clinical development and commercialization expertise in China. The Shanghai-based company also was familiar with the process of getting drugs and vaccines approved in the world's most heavily populated country.

Pfizer and BioNTech moved swiftly to advance BNT162b2 through clinical testing. In December 2020, the vaccine won Emergency Use Authorization (EUA) in the United States.

It was a different story in China. Fosun and BioNTech didn't receive a green light to begin phase 1 clinical testing until Aug. 5, 2020. And the Chinese government still hasn't approved the COVID-19 vaccine. It's as if BioNTech's vaccine has run into a great wall in China.

What's going on? Chinese regulators appear to be deliberately slowing down the approval process for BNT162b2 in part because of fears that it could one-up COVID-19 vaccines developed by the country's own drugmakers, according to a recent report in The Wall Street Journal. Officials seem to be afraid that citizens might prefer to hold off on receiving one of several vaccines developed in China that have already been approved if they know the BioNTech vaccine is on the way.

The only positive regulatory news for Fosun and BioNTech came in February 2021. The Health Bureau of Macau, a special administrative region on the southern coast of China, granted Special Import Authorization for BNT162b2. However, only 105,000 doses were included in the special authorization.

In BioNTech's recent quarterly conference call, there was only one terse mention of the efforts in China. Sean Marett, chief business and commercial officer, simply said, "In China, our BLA [Biologics License Application] submission is under way, too."

BioNTech and Fosun signed a supply agreement with China in December 2020 to provide 100 million doses of BNT162b2. The catch is that the deal is "subject to regulatory approval." That approval remains elusive.

In the meantime, BioNTech must look elsewhere to achieve success. The company shouldn't have any problems finding it. As of July 21, BioNTech and Pfizer had orders for more than 1 billion doses for next year and beyond.

But if the Chinese government decides to take its foot off the brake, BioNTech should have a tremendous opportunity. China's population tops 1.4 billion -- nearly two times bigger than the U.S. and the European Union combined. It's by far the biggest potential market for BioNTech, at least in terms of doses that could be administered. If the barriers in China are removed, this vaccine stock could soar even higher than it already has this year.