Here's why Facebook, Sony, and Microsoft are great stocks to buy before growth skyrockets in the virtual and augmented reality market.

Virtual reality (VR) and augmented reality (AR) devices are still relatively niche types of consumer products, considering their hefty price tags and limited uses. But many tech companies are making big bets on the VR/AR market blowing up in the coming years.

If bullish predictions about the VR/AR market are correct, three companies in particular stand to benefit thanks to their firm holds on their respective niches in the space: Facebook (META 2.53%), Sony (SONY -1.37%), and Microsoft (MSFT 0.13%). By investing in VR/AR stocks with a diversified range of focuses (social networking and social gaming for Facebook, narrative-driven gaming for Sony, and enterprise uses for Microsoft), investors can benefit from the rapid adoption across different industries. 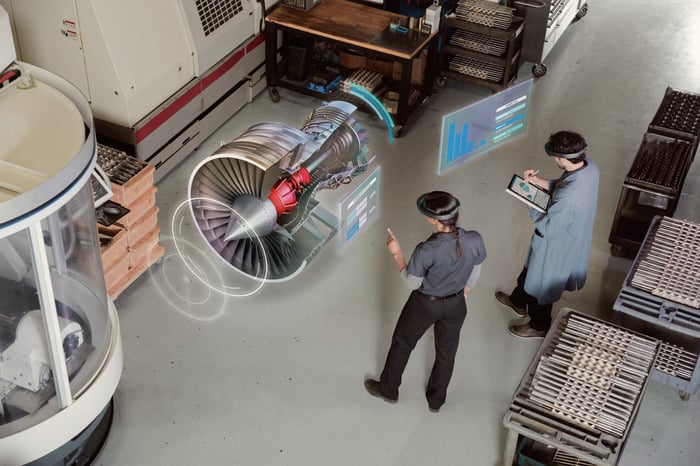 Facebook's strategy for domination in VR started early with laying a solid foundation of technology and developer talent, mostly through acquiring existing VR hardware and software companies. Since its acquisition of Oculus VR in 2014, Facebook has acquired several other small yet high-performing studios like BigBox and Unit 2. This talent lineup, combined with the company's early-mover status, put Facebook ahead of the competition in VR gaming.

The company's long-term vision for VR is much more grandiose than just gaming, though. Mark Zuckerberg has big plans for a Facebook-powered metaverse (essentially, a VR-powered social network or "digital world"), and the company stands light-years ahead of potential competitors in this sector thanks to its sheer user count and unmatched network effects. While Facebook still has some work to do in gaining public trust, it is one of the best bets on the future of VR and AR.

Sony's VR ambitions are focused more acutely on gaming -- especially on immersing players in the company's famous storyline-driven game franchises, as opposed to a social-driven game platform or metaverse. This focus is well suited for Sony's strong lineup of exclusive, narrative-based game franchises like God of War, The Last of Us, and most of the Uncharted titles.

Whether you're a gamer or not, the numbers don't lie: Sony's PS VR is the best-selling headset on the market today. This market leadership, combined with a forthcoming new PS VR built for the PlayStation 5, mean investors shouldn't overlook Sony as a leading stock in VR gaming.

While Microsoft has no public plans to develop VR or AR capabilities in its Xbox gaming division, the company's $22 billion contract to build AR headsets for the U.S. Army implies it will focus instead on VR/AR use in the government and enterprise sectors. Microsoft's enterprise "mixed reality" headset, the HoloLens 2, is used to train and guide employees through difficult tasks. For example, Lockheed Martin uses the HoloLens 2 to build spacecraft with efficient precision.

Microsoft is a great growth stock to own for multiple reasons, including its powerful cloud and Xbox's promising future in cloud gaming. The strong leadership position of the HoloLens 2 in enterprise and government solutions is yet another convincing reason to own the stock for the long haul.

The future of VR/AR

Overall, expectations for high growth in the VR/AR space are not unwarranted. Fortune Business Insights forecasts that the global market for VR gaming will reach $45.2 billion by 2027 (from $5.1 billion in 2019).

This translates to a compounded annual growth rate (CAGR) of 31.8%, compared to a CAGR of only 5.3% for the overall gaming console market over the same forecast period. After this market hits the ground running, investors will be glad to own the three VR/AR stocks discussed above.