You'll need to be prepared for a long holding period and a hearty helping of risk.

For example, Cybin (CYBN -4.56%) is a biotech that's developing mental illness treatments derived from widely illegal psychedelic chemicals like psilocybin (best known as the active compound in "magic mushrooms"). Based on a swath of extremely positive coverage in the scientific literature, I'm of the opinion that these psychedelic therapies are going to be a tremendous force for good -- and investor returns -- over the coming years. And Cybin could well be one of the leaders in the psychedelics space, so let's take a look at why it's shaping up to be a brilliant investment. 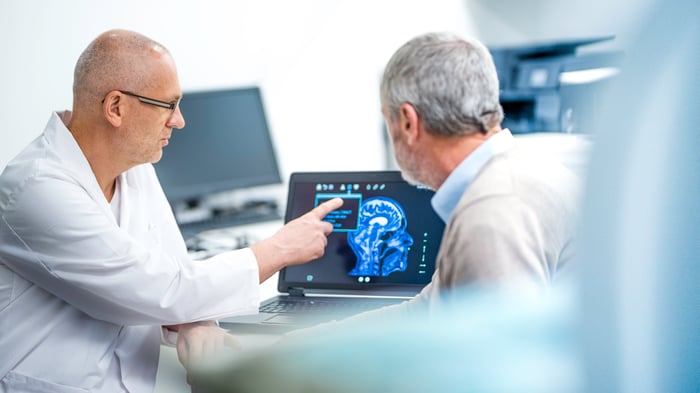 Building the right capabilities for success in psychedelics

Cybin has a few technologies that will give it an edge in the market for psychedelics, assuming it eventually gets a drug approved for sale.

First, there are its drug delivery systems. These include the under-the-tongue dissolving films it developed for its leading program, CYB-001, its clinical-stage psilocybin-based therapy for depression. The company is also planning to use an inhaler system that already has regulatory approval with CYB-004, a preclinical anxiety disorder treatment.

Both of these delivery modes will give it the ability to finely calibrate dosing for all of its candidates, not to mention reducing the delay between the administration of a therapy and the onset of its effects. And, while it's true that competitors have similar aspirations for granular control of their therapies, most focus on dosing rather than the speed of onset.

Cybin is also an early mover in using neuroimaging techniques to generate data about how patients' brains behave before, during, and after treatment with psychedelics. That's a key capability, as it'll provide researchers with reams of quantitative data they can use to optimize treatment protocols or even the molecular makeup of the drugs. Furthermore, to my knowledge, no other psychedelics company has opted to make use of similar neuroimaging technology as extensively as Cybin plans to.

Technology aside, several recent developments suggest that Cybin is preparing for a speedy takeoff.

Early in July, the company signed a research and development collaboration with Greenbrook TMS, which will give it access to Greenbrook's network of 129 outpatient mental healthcare facilities. The collaboration could reduce clinical trial costs as it grants Cybin a ready-made patient population from which to recruit participants, making this an important step in the right direction as more of the company's projects move into the clinical stage of development.

Then there's the uplisting. As of Aug. 5, Cybin's stock is listed on the New York Stock Exchange rather than over the counter. That's a significant milestone, as it means the company has met -- and expects to continue to meet -- a new set of listing requirements. It might not benefit shareholders directly today, but it's a helpful factor that could support higher share prices in the future.

Finally, if all of what I've said so far isn't convincing, it looks like there are a few analysts on Wall Street that are enthusiastic about this company, too. Five analysts rate the stock as a buy with a consensus price target of $10.50, which is quite a step up from its current price in the $2.30 range.

As favorable as Cybin's future appears to be, it's important to remember that it's a biotech stock that's deep in uncharted waters. Nobody knows if or when the legality issues surrounding the company's psychedelic molecules will be resolved.

Likewise, there is no guarantee that its therapies will prove themselves in clinical trials or that its ambitious technologies will live up to their potential. At a minimum, it'll be years before the business has the chance to make any significant revenue through sales of its products, if it ever does.

In other words, this is a risky stock to buy, and it isn't for everyone. But if you're willing to take a calculated risk and make an investment in a psychedelics developer, Cybin is an excellent option, and people who buy it now could easily see their shares explode in value over time.

Could Cybin Be a Millionaire-Maker Stock?
358%