Please ensure Javascript is enabled for purposes of website accessibility
Log In Help Join The Motley Fool
Free Article Join Over 1 Million Premium Members And Get More In-Depth Stock Guidance and Research
By Will Healy – Sep 2, 2021 at 6:09AM

The milestone is plausible if it maintains its growth rate.

After the reaction to its recent second-quarter earnings report, a $1 trillion market cap is probably the last thing on the minds of Roku (ROKU -3.87%) investors. The stock began to drop after the Aug. 9 update, ultimately falling by 14% over the next 10 days before starting to rebound. However, such short-term moves tend to have little effect on long-term futures. With a massive addressable market and a history of industry dominance, a $1 trillion market cap may not be as far-fetched of a possibility as it might appear.

The state of Roku

Currently, Roku supports a market cap of about $48 billion. At that level, the stock price would have to increase by about 42% annually on average to attain the $1 trillion market cap in 2030. 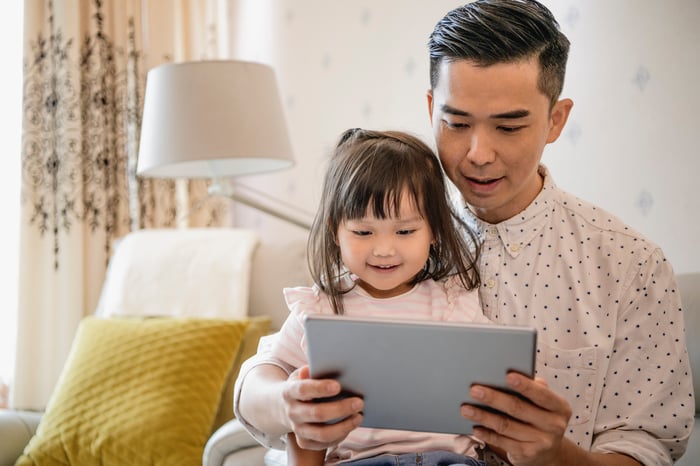 While that sounds like a tall order, the 1,400% increase in Roku's stock price over the last five years indicates such a move is far from impossible. Additionally, Roku stock continues to outperform its mega-tech competitors. It has surged by more than 140% over the last year, far ahead of a slower-growing Apple (AAPL -2.63%), which rose by less than 20%.

Moreover, while Netflix (NFLX -1.53%) pioneered the streaming industry, Roku deserves credit for organizing and monetizing the space. It transformed a platform for streaming services and selling hardware into an ad-based ecosystem and served as a neutral platform that showed no favoritism toward any individual provider. This platform attracted the attention of content providers seeking a distribution channel as well as advertisers seeking an audience. Roku also made deals with electronics manufacturers that allowed it to place this ecosystem within televisions.

These deals kept it well ahead of competitors such as Amazon's (AMZN 0.58%) Fire TV, Google TV from Alphabet (GOOG -1.38%) (GOOGL -1.45%), or Apple TV. It then abandoned its neutrality in 2017 to launch the Roku Channel, effectively making Roku a competitor of the other streaming channels on its platform. Also, thanks to a deal with a content provider Quibi, it started offering exclusive content, intensifying competition with original content providers such as Netflix and Amazon.

Such deals have helped it serve an addressable market estimated at $50 billion in 2020, according to Grand View Research. Grand View also believes this market will grow to $224 billion by 2028 at a 21% compound annual growth rate. Roku currently holds about 30% of that market globally, according to Conviva.

The company has also focused increasingly on international expansion. On the Q2 2021 earnings call, it said that it continues to hold its No. 1 position in Canada and emphasized its expansion efforts in the U.K., Mexico, and Brazil. This is a necessary step as it seeks to support the expanding presence of Netflix, Walt Disney's (DIS -3.22%) Disney+, and other streaming channels around the world. Also, the international market will likely drive longer-term growth as the U.S. market becomes more saturated.

While Roku did not publish financials by country, it generated over $1.2 billion in revenue in the first half of 2021. This is an increase of 80% from the same period in 2020. This surge helped it attain profitability: The company earned $150 million in the first two quarters of the year.

Due to uncertainty surrounding the pandemic recovery, Roku declined to project beyond the third quarter. Nonetheless, its forecast for $680 million in quarterly revenue at the midpoint represents a 51% increase from year-ago levels.

Still, its price-to-sales ratio of 21 may seem high for a stock that often sold for less than 10 times sales before the pandemic. Also, it has become significantly more expensive than Netflix, which trades at nine times sales.

Roku stock has historically exceeded the 42% stock growth rate needed to reach $1 trillion. Admittedly, the law of large numbers will probably weigh on growth. In stock terms, this means that a larger market cap will make higher-percentage increases increasingly difficult. Over time, slowing growth could also lead to downward pressure on the sales multiple of the entertainment stock.

However, it appears that Roku has only begun to tap the international markets it will need to support the likes of Netflix and Disney in other countries. These markets may or not take it to $1 trillion by 2030, but they will probably make Roku a significantly larger company by that time.

5 Struggling Stocks to Buy at a Discount
356%