The gym company is churning out lots of franchises, but can it challenge Peloton's dominance?

Backed by action movie star Mark Wahlberg and operating a fast-growing subscription model, the newly public gym company F45 Training (FXLV -7.35%) has seen rapid stock gains followed by an equally swift fall after its second-quarter 2021 earnings report on August 26. The company's revenue grew by over 50% year-over-year. Yet, F45 also registered a loss and missed Wall Street's consensus earnings-per-share (EPS) estimates by over a dollar. There are several reasons why investors might want to remain cautious at this point, but also why they might want to watch future developments closely.

Some metrics are looking strongly positive, others less so

On the bright side for F45 Training, its top-line revenue rose 54% year over year while same-store sales grew by an explosive 126%. Most of the company's revenue for the quarter came from sales of franchises. Out of $26.8 million in net sales, $20.6 million came from franchise revenues, with 554 new franchises sold in the period. Equipment sales accounted for the rest of its top-line sales.

During the company's Q2 earnings conference call, CEO Adam Gilchrist expressed his confidence that "based on our white-space analysis, we believe there is long-term studio potential for us to open over 7,000 studios in the U.S." He claims the overseas total will eventually reach 16,000 locations, indicating a potential overall network of 23,000 franchises. 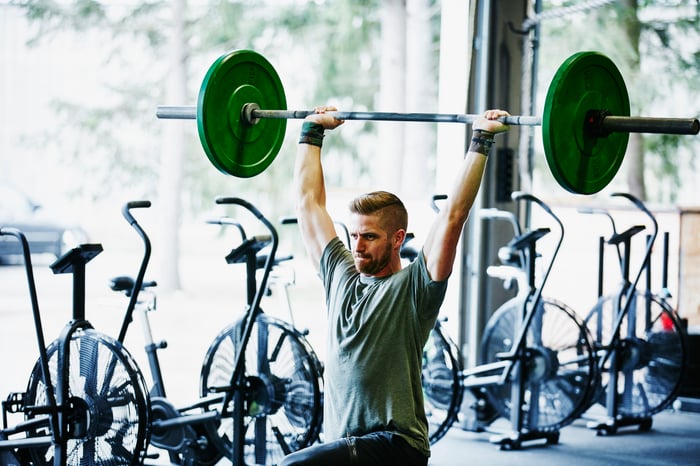 Significantly for future growth, F45 is "actively pursuing potential opportunities to partner with major universities, high schools, corporations and military facilities" with "29 studios located in major university campuses" and "our first studio in the government military base in Miramar, California," according to Gilchrist.

On the downside, the bottom-line net income was $5.9 million in Q2 2020, but Q2 2021 showed a $30.5 million net loss despite the all-time high revenue generated. F45's balance sheet notes that selling, general, and administrative expenses (SG&A) more than doubled year over year, which cut sharply into income. The quarterly net income from operations was $3.07 million this year versus $5.58 million last year.

However, what put F45's overall net income into negative territory was $23.1 million in losses on derivative liabilities, plus surging interest expenses. As the company explained in its detailed 10-Q quarterly report to the SEC, these liabilities were part of a swap agreement used to hedge against its debt. When it launched its July 14 IPO, the debt liabilities were converted into 14.8 million shares of common stock. At the same time, their change in fair value was recorded as a loss on F45's balance sheet.

F45 has both advantages and disadvantages versus Peloton

F45 Training competes against another significant fitness company, namely high-profile remote workout provider Peloton Interactive (PTON -3.56%). Peloton's long upward trajectory seems to have faltered as America reopens, while problems with its treadmills have taken another bite out of its gains. This might represent an opportunity for F45.

Peloton may have an advantage in home-based workouts thanks to its prominence in the field and its large library of streaming content. Some research surveys suggest only a little more than 30% of pre-pandemic gym members have returned to physical gyms even with lockdowns lifted and COVID-19 vaccination widespread. One source indicates that around 19% of Peloton subscribers have canceled their memberships, and 40% of the remaining clients say they are mulling cancellation. Other data from an UpSwell Marketing survey, however, suggests 80% of former gym-goers are potentially ready to return to brick-and-mortar workout establishments.

Physical gyms can't duplicate the extreme scheduling flexibility, lack of judgmental third-party observers, and time-saving convenience of streaming workouts at home. But, although Peloton has a first-mover advantage in this field, F45 might challenge it here, too. The newly public gym company has its own home workouts, combined with a healthy meal plan backed up by online ordering.

In the physical space, F45's team workouts likely appeal to hardcore fitness enthusiasts looking for maximum motivation. Adding in the kaleidoscopic variety of workouts it offers against Peloton's limited bike or treadmill workouts gives F45 even more of a potential edge. F45 has over 6,000 exercises available, along with the appropriate equipment. As the company noted, clients can theoretically choose never to have the same workout twice. On the other hand, Peloton's selection is limited because of the company's narrow focus on strictly online solutions.

The takeaway on F45 Training

Due to the company's mixed results, heavy dependence on franchise sales growth, and recent net losses, investors may want to be cautious about F45 stock for the time being. With only one quarterly report to its name as a public company, it seems much too early to go all-in on the company -- or to write it off entirely.

The enterprise has some significant assets, after all, including the camaraderie of its team workouts, plus its plethora of exercises. There are enough hints of a bull case to keep an eye on developments in F45's next few quarterly reports, but probably not enough at this stage to risk buying into the company at a significant level when choosing among consumer discretionary stocks in this sector.

Forget Peloton, This Gym Stock Might Be a Post-Lockdown Workout Winner
366%