Please ensure Javascript is enabled for purposes of website accessibility
Log In Help Join The Motley Fool
Free Article Join Over 1 Million Premium Members And Get More In-Depth Stock Guidance and Research
By Neil Patel – Sep 4, 2021 at 11:30AM

Offering a mix of value and growth, this popular retailer belongs on every investor's watch list.

One of the major stories in financial markets this year has been the popularity of Reddit-fueled meme stocks. Thanks to the power of online communities, large numbers of individual investors have come together to make contrarian bets on heavily-shorted stocks in speculative bids to make quick profits. AMC and GameStop have been among the more prominent examples of stocks benefiting from this wild trend.

But as a long-term strategy, trading meme stocks will prove to be unsustainable. A better and safer investing strategy is to focus on quality companies. If you want to build real wealth, create a diverse portfolio out of those stocks and hold onto them for the long haul. 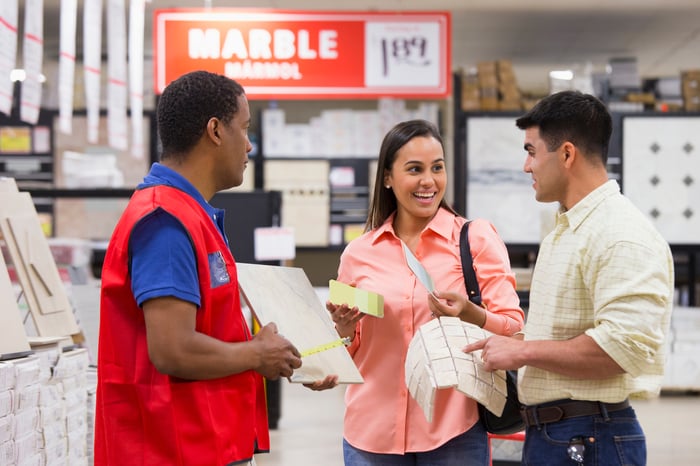 The second-largest, home-improvement retailer behind Home Depot (HD 1.51%), Lowe's currently trades at a forward price-to-earnings (P/E) ratio of just 18. That looks like a bargain compared to the S&P 500 market index's forward P/E of 22. And it's hard to find good valuations like this in a stock market that has been hitting new, all-time highs like clockwork for months.

What makes Lowe's a good business? Well, a lot of things. For starters, it has been experiencing rapid growth over the past couple of years. In its most recent quarter ended July 30, however, revenue was essentially flat and same-store sales were down from the prior-year period. But that was against the extremely difficult comparison to fiscal Q2 2020, when pandemic restrictions led to a big boost in home-improvement spending. Approximately 75% of the chain's business is derived from do-it-yourselfers.

Therefore, it's best to look at Lowe's performance over the past two years. Compared to fiscal Q2 2019, revenue increased 31.3%, U.S. comps jumped 32%, and digital sales soared by 151% in the most recent quarter.

Adding to the bull case for Lowe's is the fact that it's benefiting greatly from the current housing boom. Interest rates are still extremely low by historical standards, and data shows that there is a huge housing shortage in the U.S. while demand is high. That has resulted in swiftly rising home prices, which supports demand for Lowe's products because of the "wealth effect." When homeowners know that their properties are appreciating significantly in value, they're more likely to take on renovation projects. What's more, the surging trend of telecommuting has caused people to reassess their living situations and adapt their spaces for remote work, spurring more demand for what Lowe's offers.

Another benefit of owning the stock is that Lowe's has made a habit of rewarding its shareholders with dividends and stock buybacks. During fiscal Q2, the company paid out $430 million in dividends and repurchased $3.1 billion worth of its stock.

It's also evident that consumers are starting to take on bigger, more complex projects that they delayed last year during the earlier stages of the pandemic. Comps for Lowe's pro business, which sells to contractors, grew at an impressive 21% in the quarter and 49% on a two-year basis. This segment now represents about a quarter of the company's overall revenue. Home Depot, on the other hand, generates almost half of its sales from this lucrative customer group, so Lowe's has a lot of catching up to do -- and things are looking good so far.

Management is optimistic about the trajectory of the company and have upgraded their outlook. For the fiscal year, the company is now guiding for revenue of $92 billion (up from $86 billion previously) and an operating margin of 12.2% (up from 12%). And for all of fiscal 2021, it expects buy back $9 billion of stock.

Lowe's stock has outperformed its larger rival over the past five years, rising 166% versus Home Depot's 142% gain. Yet Lowe's still looks like a bargain today. This is a business with a strong brand, scale advantages, and a sizable opportunity to continue growing. There's no reason it should trade at a cheaper multiple than the S&P 500.

Potential investors would be wise to ignore the meme-stock craze and scoop up shares in this leading retailer. It's the safer bet.