Please ensure Javascript is enabled for purposes of website accessibility
Log In Help Join The Motley Fool
Free Article Join Over 1 Million Premium Members And Get More In-Depth Stock Guidance and Research
By Anthony Di Pizio – Sep 6, 2021 at 8:00AM

Pandemic lockdowns supercharged growth for these two companies, but that strength hasn't carried through into 2021.

The U.S. economy is on a gradual path to recovery, and that has been bullish for many stocks in 2021. As the benchmark S&P 500 index continues powering to new highs -- already up over 20% year to date -- you might be tempted to chase high-growth stocks that appear to have been easy money up until this point.

But it's important to remember that past performance is not a reliable indicator of future results. That's especially true given the once-in-a-century pandemic investors just navigated. While some stocks fared well in the stay-at-home economy, that performance might not carry through as we return to normal life.

There's still some good value in this market, but here are two popular growth stocks to avoid as they show signs of slowing in the post-pandemic world. 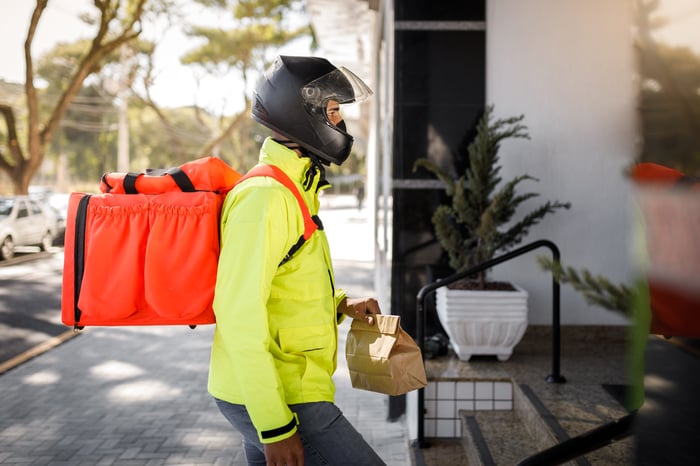 Food delivery felt like an obvious winner during COVID-19 lockdowns, and DoorDash (DASH -2.40%) had the astronomical growth to prove it. During the third quarter of 2020, the company generated 268% year-over-year revenue growth, but it was always going to be difficult to maintain that pace.

In fact, that quarter turned out to be the peak.

Revenue growth has steadily declined since then, falling below triple digits in the second quarter. While 83% is still strong, DoorDash has warned investors to expect a seasonal slowdown heading into the end of the year, so there's little hope of returning to 2020 growth levels in the near future.

Analysts actually expect full-year revenue growth to slow all the way down to just 19% in 2022. Though DoorDash has plenty of time to improve this trend before then, it highlights the contrast between what the company could achieve in a stay-at-home economy versus the normal conditions we're returning to.

But the larger concern is DoorDash's lack of profits. For all the spectacular performance of 2020, the company failed to bring it to the bottom line as it reported a loss of $7.39 per share for the year. The red ink has persisted in the first six half of 2021 with losses of $0.64 per share. While the company is closer to breaking even, slowing revenue growth may hinder its efforts to generate profits long term.

DoorDash also faces competitive headwinds. A second-quarter survey by Bloomberg revealed DoorDash, Uber Eats, and GrubHub shared up to 40% of their customers. Food delivery is a business with few barriers to entry, and it could mean DoorDash's hopes for prolonged profitability will be dashed by endless spending on customer acquisition.

With the stock trading at almost 14 times estimated 2021 sales, no earnings on the horizon, and growth quickly decelerating, investors might want to be careful jumping in at current levels. The second stock to avoid post-pandemic is women-centric dating app Bumble (BMBL 0.04%). You might be thinking a wide open society is good for dating -- and it is -- but the evidence is mounting the lockdown period was simply better. Remember, app-based technology only does well when people spend time using it, and we all had far more screen time during the pandemic.

A Bumble spokesperson noted the app saw a 26% increase in engagement during March 2020 as the lockdowns were entering their strictest stages. That showed up in the company's quarterly numbers, and much like DoorDash, growth has since slowed.

Looking at revenue sequentially (quarter over quarter), we can observe the almost complete stall in Bumble's growth going into the beginning of 2021 as the economy reopened.

Bumble also owns a second successful dating app called Badoo, which is popular in markets in Europe and Latin America. It's not a women-act-first app like Bumble -- it's more conceptually generic -- but it has been somewhat of a drag on the company's overall financial picture.

Analysts expect Bumble to deliver $1.65 in earnings per share this year, but that profitability is mainly thanks to an income tax benefit recognized in the first quarter. Expectations for 2022 offer a more realistic picture of the company's position with a significantly smaller $0.34 per-share profit.

That places the stock's valuation at over 175 times 2022 earnings estimates. It should come as no surprise shares are down since the February IPO.