Three years ago, United Launch Alliance (ULA) made a fateful choice: The spacefaring joint venture between Lockheed Martin (NYSE:LMT) and Boeing (NYSE:BA) would design its new Vulcan space rocket around new BE-4 engines being designed by Jeff Bezos' Blue Origin rocket company. In so doing, ULA officially passed on Aerojet Rocketdyne's (NYSE:AJRD) AR1 engine -- and hitched its fortunes to Blue Origin instead.

That may have been a mistake. 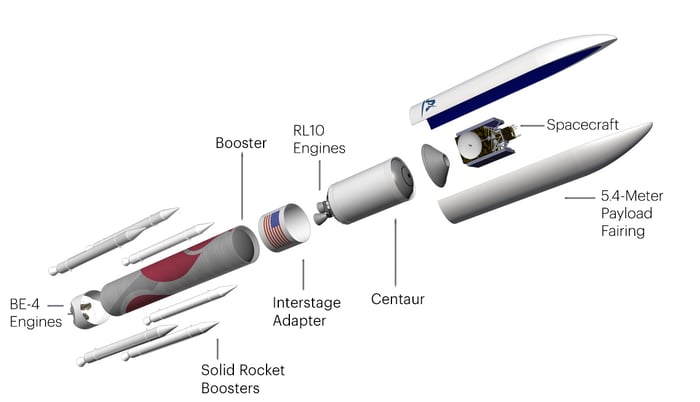 It was, however, a reasonable mistake to make. Blue Origin's BE-4 promised better performance than Aerojet's AR1 engine -- about 10% more sea level thrust, which would translate into greater payload to orbit and more cost-effective bidding on the lucrative government contracts big defense companies seek.Even more important, Blue Origin was believed to be at least a year ahead of Aerojet in development, such that the BE-4 would be ready for test flights by 2019, while the AR1 wouldn't be ready before 2020.

Oh, the engines have been built. In fact, Blue Origin assembled its first complete BE-4 engine back in early 2017, just as initially promised. (Aerojet didn't get its first AR1 put together until January of this year.) Blue Origin even delivered its first "pathfinder" BE-4 to ULA in 2020.

But as Ars Technica pointed out last month, Blue Origin is falling increasingly behind schedule on its first set of two fully tested "flight" engines -- the version needed to conduct a Vulcan test flight. Indeed, in an interview with the Denver Business Journal last week, ULA CEO Tory Bruno confided that it will be early 2022 before Blue Origin's engines actually arrive. As a result, ULA customer Astrobotic, which had signed up to be Vulcan's inaugural launch customer, must wait another year before Vulcan can send its Peregrine lunar lander to the moon.

Nor is Astrobotic the only customer stuck cooling its heels.

Last year, if you recall, the United States Space Force awarded a series of "Phase 2 Procurement" contracts to ULA and SpaceX -- hundreds of millions of dollars' worth of defense department space contracts covering the whole period from fiscal 2022 through 2027. Fully 60% of that money was awarded to ULA, flowing through, eventually, to the space divisions at parent companies Lockheed Martin and Boeing.

But here's the thing: ULA must complete two non-national security missions before the Defense Department will certify it to conduct missions for the Space Force. (Astrobotic will be the first such mission, then ULA will send Sierra Nevada's Dream Chaser spaceplane on a resupply mission to the International Space Station.) Time is getting tight for ULA to complete both those launches, then begin launching Space Force missions -- all before fiscal 2022 ends on Sept. 30, 2022.

Now, Bruno insists that no matter what, ULA will "absolutely" have enough time to launch "two missions ... for certification before that first flight of Vulcan for national security" in 2022 -- and maybe he's right about that. If he's mistaken, however, well, in a separate interview with the Denver Business Journal last week, Air Force Secretary Frank Kendall pointed out that if "Blue Origin's engine is late, and that's causing some problems ... we have another option."

In other words, the Pentagon may already be making contingency plans in case ULA misses its deadline.

If ULA can't launch for it in fiscal 2022, the Space Force may ask SpaceX to take over those 2022 missions -- and to take the revenue that would otherwise have gone to ULA. And because both Lockheed Martin and Boeing depend on this revenue flowing through ULA into their own space divisions (S&P Global Market Intelligence reports that Lockheed Martin depends on space for 19% of its revenue, while space and defense make up 45% of Boeing's revenue stream), this will impact both of those stocks.