The "dot-com" bubble is one of the most famous periods in stock market history. The internet was new, and an investor frenzy bid up stocks that had anything to do with the worldwide web. Eventually, the bubble burst and most of the frenzied stocks are no longer around today.

A similar craze with electric vehicles (EVs) has occurred; electric vehicle company Rivian may IPO at a larger valuation than Ford Motor Company without delivering a single vehicle! But just like the internet, electric vehicles are coming, and some great companies are leading the charge; here are three of them.

Tesla (NASDAQ:TSLA), led by CEO Elon Musk, brought electric vehicles into the mainstream discussion in 2012 when the Model S launched. The rest of the automotive industry watched Tesla's deliveries grow from 22,442 vehicles in 2013 to 499,535 in 2020; now, the entire industry is racing to bring competitive electric vehicles to market. 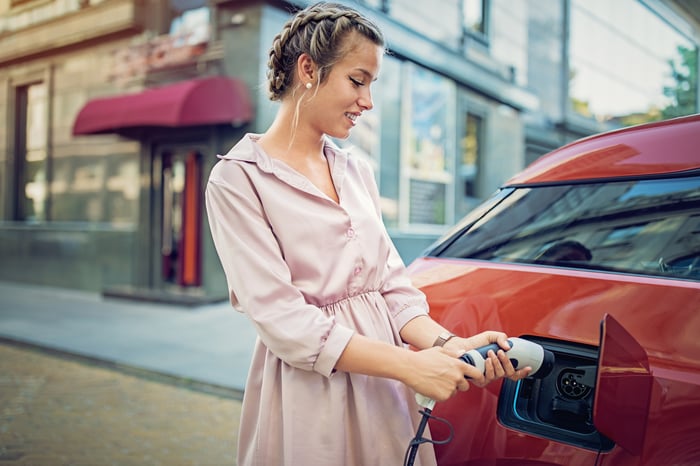 The company has an enormous first-mover advantage in the United States market, with an estimated 71% market share of electric vehicles. In 2020, Tesla models represented 79% of new electric vehicle registrations in the U.S.

Electric car stocks are entering the picture, such as Rivian, Lordstown Motors, and Lucid Motors; plus, legacy automotive manufacturers are bringing EV models into their lineups. But many of these competitors still need to prove their success, while Tesla remains the face of electric vehicle technology. It remains the safest investment in an emerging space until a competitor manages to take meaningful market share from them.

Charging stations are an important, yet often forgotten, aspect of the electric vehicle market. Tesla has famously invested in its own charging network, but most automotive manufacturers are not doing so, leaving EV drivers in need of a network of chargers to support their travel needs.

ChargePoint Holdings (NYSE:CHPT) is the dominant charging network in North America, with more than 118,000 active stations and seven times as much market share as its closest competitor. The company has more than 5,000 customers that choose ChargePoint to bring EV charging to their premises, including businesses, fleets, resorts, and residences.

There is a clear political push for electric vehicles and ESG (environmental, social, and governance) standards that companies are striving for, so the tailwinds are there for consumers to continue gravitating toward EVs. This will directly benefit ChargePoint, whose software and service segments will generate recurring revenue as its charging network grows.

3. A potential disruptor of the battery business

Whereas the engine is the critical component of the gas-powered vehicle, the battery is the heart of the EV. QuantumScape (NYSE:QS) is a battery technology company working to bring a new type of EV battery to market.

QuantumScape's battery is a solid-state lithium-metal battery, which is more energy-dense than traditional lithium-ion batteries, and the company claims it can be charged faster and last longer. The company also has more than 200 patents and applications pending, giving QuantumScape legal protection if the battery is as effective as it hopes it is.

However, the battery is still in development, meaning the company is essentially "pre-revenue" and a riskier investment than both Tesla and ChargePoint. Furthermore, the commercialization of the battery is still several years away, with management expecting testing to begin in 2023 and a full launch in 2025. Investors should be aware that QuantumScape doesn't yet have a product and that buying the stock is a bet that promises turn into real results in the future.

The automotive industry is collectively worth more than $2 trillion and could someday be fully electric. The opportunity for huge returns is there for investors, just like the internet in its earliest days. But just like the dot-com boom, investors need to be careful to identify the leaders of EV technology and not get caught up with the pretenders that never amount to much.

With Tesla, ChargePoint, and QuantumScape, investors have exposure to EVs, the infrastructure beneath them, and a high-upside leap forward in battery technology. These are potentially impactful companies that could end up being the titans of an electric automotive industry over the long haul.

But just like the internet in its early days, electric vehicles are a new industry with elevated risk. Tesla has proven the most of these three companies, but all three, to a degree, are pricing in the future success that the underlying businesses haven't yet delivered on. Investors can benefit from these stocks but will need to remain vigilant in seeing that the management teams behind each come through on their promises.