Please ensure Javascript is enabled for purposes of website accessibility
Log In Help Join The Motley Fool
Free Article Join Over 1 Million Premium Members And Get More In-Depth Stock Guidance and Research
By Dan Caplinger – Sep 9, 2021 at 8:35AM

These popular companies are seeing their shares move in the wrong direction.

After a down day on Wednesday, investors seemed ready to watch the stock market extend those losses on Thursday morning. Conflicting guidance from the Federal Reserve has some market participants confused, and various readings on the economy and the health of corporate America are also far from clear. As of 7 a.m. EDT, futures on the Dow Jones Industrial Average (^DJI) were down 95 points to 34,917. S&P 500 (^GSPC -0.16%) futures fell 12 points to 4,500, and Nasdaq Composite (^IXIC) futures dropped 32 points to 15,588.

Contributing to the negative sentiment were sizable drops in two stocks. Boston Beer (SAM -0.56%) continued to deal with bad news that will hurt its earnings in the future, while GameStop (GME 1.23%) wasn't able to give shareholders the positive progress report they needed. Below, we'll look more closely at what moved both stocks. 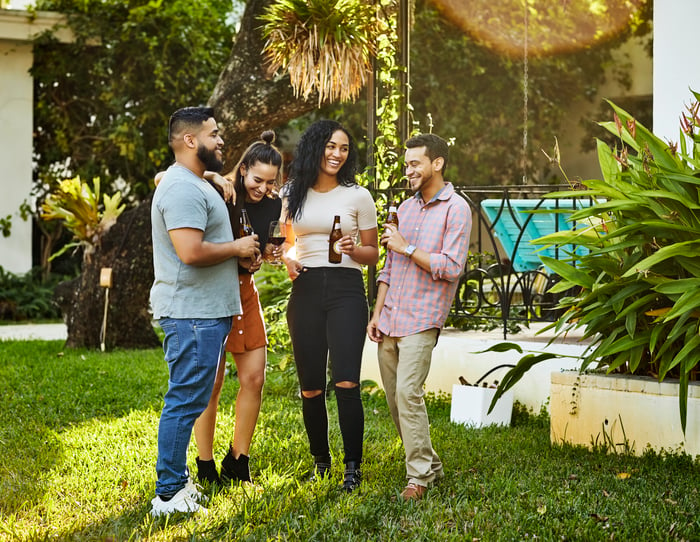 Shares of Boston Beer were down another 9% Thursday morning. That extended the losses from the Samuel Adams beer maker to more than 60%.

The news that sent Boston Beer shares lower once again had to do with the update to financial guidance that the company made late Wednesday. The entire hard seltzer industry has continued to see declining demand, with the company citing figures that volumes for the full 2021 year will be 100 million cases below what was believed in May and 30 million fewer than even the revised guidance from July. Boston Beer claims that its products are faring better than the overall industry, but even so, the beverage maker decided that it had to withdraw its financial guidance for the full year in light of continuing uncertainty.

Even worse, Boston Beer believes it will have to take various charges to deal with the situation, including write-offs of inventory and reimbursements to third-party brewers related to the shortfall in demand. That led the company to project that earnings will be below its previously guided range of $18 to $22 per share.

Investors have already had to deal with the fallout from weakening seltzer sales. This latest news will only add more fuel to the fire, making some question whether hard seltzer was just a passing fad.

Meanwhile, GameStop saw its stock drop 8% in premarket trading. The video game retailer continues to reinvent itself, but it didn't make as much progress as shareholders wanted to see in its most recent quarter.

Some of the news from GameStop seemed good. Revenue rose more than 25% year over year to $1.18 billion. Net losses declined substantially, helping to cut diluted losses per share in half to $0.85.

Yet GameStop chose to accentuate aspects of its financial condition that seem to point more at bare survival rather than moving forward with its transformation. The company ended the period with cash of $1.78 billion, and it had no debt other than a relief-related loan from the government of France. Yet moves like expanding GameStop's product catalog, boosting its fulfillment capacity, and boosting hiring could take a long time to play out positively.

Investors are so excited about GameStop that it's hard to listen to more realistic assessments of the company. However, for GameStop to make good on its turnaround efforts, it will have to work extremely hard and execute its plan successfully.