Resilient companies are always worth a closer look.

Investors came into Friday knowing that the week had been a bad one for the stock market, but they'd hoped that Wall Street would find a way to claw back some of the losses on Friday. Unfortunately, that wasn't the case, as worries about the COVID-19 pandemic and the potential for continued political backlash weighed on investor sentiment. By the end of the session, the Nasdaq Composite (^IXIC -0.18%) was down almost 1%, while the S&P 500 (^GSPC -0.12%) and Dow Jones Industrial Average (^DJI 0.10%) suffered only marginally smaller losses.

Yet some stocks managed to post sizable gains even in a poor market environment. Peloton Interactive (PTON 13.00%) added to gains from Thursday, while Zynga (ZNGA) benefited from a lawsuit involving two different companies that nevertheless could have significant implications for its own business.

Peloton is getting stylish

Shares of Peloton Interactive rose another 7% on Friday. That brought the interactive fitness stock's gains to about 17% over the past two days, as investors reacted favorably to its most recent business foray. 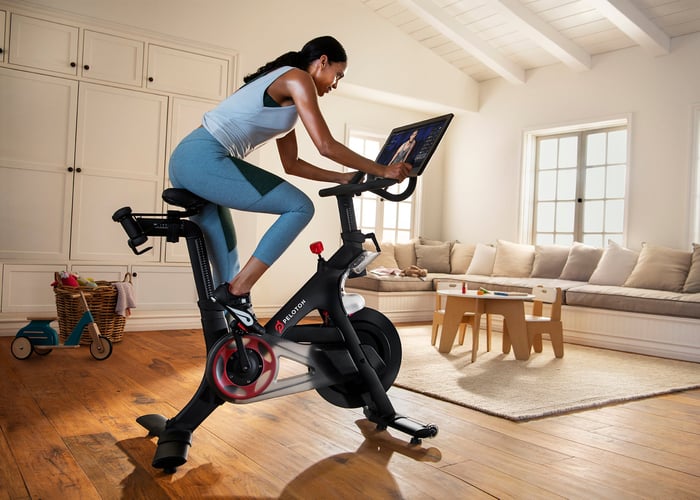 On Thursday, Peloton said that it would launch its own private-label line of athletic apparel. Although the clothing will offer features that make working out more comfortable for all of Peloton's members, the company's intent isn't simply to provide apparel solely for the duration of an exercise routine. Instead, Peloton is hoping to jump into the athleisure segment and promote itself as a lifestyle brand.

Friday brought the introduction of Peloton's private-label clothing lines on its website. Investors seemed pleased with the selection that they saw, and they're hopeful that the move will enhance Peloton's appeal to members.

Peloton has had a tough road lately, with issues related to the recall of its treadmill having proven difficult to overcome. What's clear from Peloton's strategy is that it's trying to put past events behind it and move forward in new directions; based on the stock's move, shareholders seem to like what they're seeing from the connected-fitness leader.

Meanwhile, shares of Zynga finished higher by 6%. The mobile-game giant could stand to benefit from litigation that didn't directly involve it.

Epic Games, the maker of the popular Fortnite app, wanted to encourage its customers to use payment methods other than paying directly through Apple's payment system, which claimed 30% of its sales. On Friday, a federal court judge ruled that Apple (AAPL -0.34%) would have to allow its fellow mobile-app creator to do so.

That's good news for Epic, although it lost on several other elements of its suit. Allegations of anticompetitive behavior were dismissed, and Apple retained the right not to allow Fortnite or other games on its App Store. Nevertheless, even the hope that app developers could staunch their flow of revenue to Apple was considered a big win.

For Zynga, the stakes are substantial. If the company can claim at least some of that 30% cut for itself, it could have a huge impact on profitability. That's apparently what Zynga shareholders are hoping to see. It'll be interesting to see whether that pans out, or some other factor comes along to thwart that strategy.

These 2 Once-Loved Stocks Are Making Their Last Stands

Should You Buy 2 of the Worst-Performing Nasdaq Stocks in 2022?

A Peloton Bailout Could Start a Big Nasdaq Stock Trend

Why Peloton and TaskUs Led the Nasdaq Lower Again Thursday
376%