Please ensure Javascript is enabled for purposes of website accessibility
Log In Help Join The Motley Fool
Free Article Join Over 1 Million Premium Members And Get More In-Depth Stock Guidance and Research
By Justin Pope – Sep 11, 2021 at 6:23AM

These industry pioneers can be long-term contributors to a growth portfolio.

Investors who can identify "big picture" trends and have the patience to wait for those trends to take hold can be rewarded with great long-term returns. We often get caught up in the day-to-day headlines we see on the news, but it's often a yearslong view that benefits investors the most.

These trends are happening right before us, and there are still years of growth ahead for the companies that drive these changes. Here are five investing themes and the growth stocks well-equipped to benefit from them.

Consumers are steadily moving away from traditional cable television and adopting streaming services such as Netflix, Hulu, and HBO Max. Technology platform Roku (ROKU -3.87%) is a leader in providing the "operating system" many streaming services run on, whether through streaming sticks or the software television makers use to power their products. 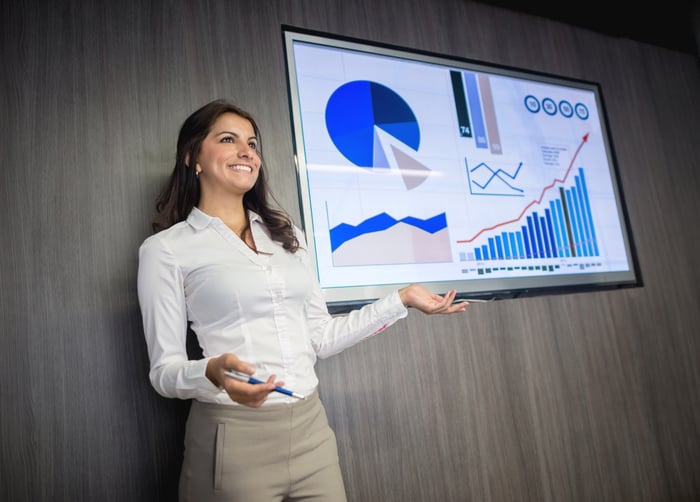 Roku's business has shifted from depending on hardware sales to a platform business that generates revenue from ads and subscriptions from viewers using their Roku TVs. The company's user base has expanded from 22 million active accounts in Q2 2018 to 55 million in its most recent quarter, Q2 2021.

As Roku gains more customers, it has more leverage with streaming partners and advertisers; its platform becomes the "gateway" to the streaming audience. Roku doesn't care whether you watch Netflix, or Hulu, only that you do it on a Roku TV. The company has had disputes with streaming companies such as Comcast, Alphabet's Google, and AT&T, but these have largely been settled (all but Google) with services resuming on Roku; the audience on Roku TVs has become too large to pass up.

Roku is actively pursuing expansion in Brazil and the UK. Moving into the years ahead, investors will want to monitor the company's international growth efforts as it works to pick up more global users.

The last decade's improvements in connective technology such as 4G and 5G have led to an ability for companies to better communicate with their customers. Twilio (TWLO -3.69%) operates a cloud-based customer engagement platform that gives developers the ability to custom build user-experiences for their business including customer chat, reminders, text alerts, and more.

Twilio had more than 240,000 active customers as of its second quarter, and the company boasted a 135% dollar-based net expansion rate, meaning those customers spent 35% more with the company during the second quarter than they did in the same period last year. This is a clear sign Twilio's services bring a lot of value to its users' operations.

The pandemic has pushed consumers further into a digital lifestyle than ever before, and businesses are searching for new methods to engage customers, and grab their attention. Twilio's "building block" technologies are giving them the tools to do this. The company is expected to grow revenue 52% in 2021 to $2.67 billion, a large step up from the $1.13 billion Twilio did the year before COVID.

3. The battle of cybersecurity

The increasingly digital nature of the world has also resulted in increased cybercrime, marked by several high-profile breaches of large companies like Alibaba, Facebook, and many more over the past decade.

Crowdstrike Holdings (CRWD -0.43%) is a cloud-based cybersecurity company that connects all of its customers to an artificial intelligence-powered network. When a threat emerges, the network collectively defends against the threat and learns from it.

The business is rapidly attracting customers -- it had more than 13,000 of them as of its most recent quarter, including 63 of the Fortune 100 and almost half of the Fortune 500. Crowdstrike is expected to hit $1.36 billion in its 2022 fiscal year (calendar year 2021), which would represent a 56% increase year over year.

A research report by MarketsandMarkets estimates that the cybersecurity market could grow from $218 billion this year to $345 billion years by 2026, so cybersecurity stocks like Crowdstrike could benefit as a leading competitor in the space.

Communications have steadily become digital over the years, and DocuSign (DOCU -0.52%) provides a secure way to digitally sign and transfer paperwork.

DocuSign has become the dominant e-signature company, commanding an estimated 70% of the market, with the next largest competitor, Adobe, well behind it. This large presence is underlined by its rapidly growing customer base of more than one million accounts.

In the second quarter of fiscal 2022 (calendar year 2021), the company generated 78% of its revenue in the United States, so there is room for international expansion moving forward. DocuSign has a digital presence in 180 countries but is strategically investing in eight "high potential" markets including Canada and Australia, where it has invested in a direct sales force. As it continues to penetrate new markets and build out new features like notaries and contract management, DocuSign could have a long growth runway left.

Entertainment is becoming increasingly interactive, and gaming and the metaverse have become hot topics in the investing community. Unity Software (U -0.50%) is a technology engine that powers 3D environments.

Unity and private rival Epic Games form a duopoly on the game engine market as virtually the only two 3D engines that game developers use. It's estimated that roughly 65% of the top 1,000 mobile games are made with Unity's game engine.

The company is expanding its uses outside of mobile gaming to other sectors that could power years of future growth, such as industrial, automotive, cinema, and the metaverse. The metaverse alone could be worth $280 billion by 2025, as it bridges the gap between the physical and virtual worlds.

The ability to create within digital worlds gives an enormous ceiling to the metaverse and other applications where 3D environments are needed. Unity is one of the two de-facto "pick and shovels" of this creation, which gives it a large range of markets to grow into.

These five companies are showing a strong ability to grow revenue thanks to leading positions in growing markets. Investors will need to monitor each business for continued revenue growth, but the long-term opportunities ahead could make each of these stocks a fantastic part of a long-term investment strategy.