Apple (NASDAQ:AAPL) stock took a hit late last week after a federal judge struck down some of the company's App Store rules regarding how payment systems are managed in apps running on its products (like iPhones and iPads). The court's decision involved a case brought by Fortnite creator Epic Games. While the ruling could hurt Apple, other requested changes Epic was demanding as part of its lawsuit did not get the court's approval. Epic management said it plans to appeal.

The gist if the judge's ruling is that developers are now allowed to send their app's users to outside payment systems from within the app. The ruling does not require Apple to allow users to use Apple's in-app payment system without paying Apple the 15% to 30% commission fee it charges.

App makers, game developers, and companies like Spotify (NYSE:SPOT) have long fought against the 30% fees Apple takes for transactions that take place on iOS devices, arguing that they should be able to use any payment system to sign up customers, rather than exclusively going through Apple's payment system for accounts accessed on Apple devices. 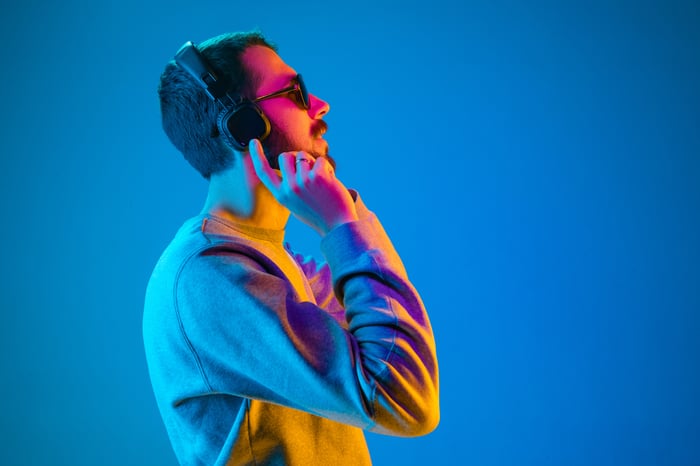 While there's a chance the rulings that didn't go Epic's way will be overturned upon appeal, the case ended up being a partial win for Apple. It can still collect fees on transactions in its payment system. But the ruling also reinforced a trend that clearly suggests Apple's grip on the App Store is loosening.

Earlier this month, for instance, Apple said it will allow "reader apps" and allow apps to use a single link to sign up customers on their own websites instead of using Apple's payment system. This latest case pushes the envelope further, requiring that Apple has to allow other (outside) payment options for in-app purchases. The impact of changes like this on a growing tech company like Spotify could be profound.

Apple takes 30% of any transactions occurring in the Apple App Store or within its ecosystem. That may seem fair on the surface because the transactions are happening via Apple devices, but there are reasons these fees are being challenged in court and even in Congress right now. The basic argument is that Apple has gone too far in its efforts to control how app developers for its devices can make money.

The tech giant's developer rules have long contained "anti-steering" provisions -- essentially, developers were forbidden from even letting their customers know there was a way to pay for their services outside of the App Store. Developers were not allowed to provide a link from within the app, nor could they offer a third-party payment platform. All they could do was ask you to log in to your account, implying that you had to go to their website to sign up for the service. If you've ever downloaded an app hoping to try it only to see a login screen when the app first opens, this is the reason why. 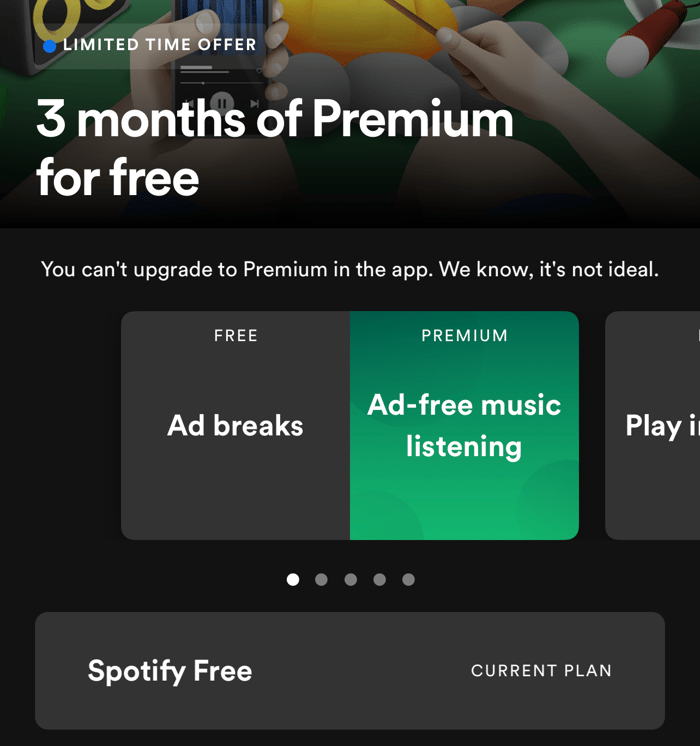 This developer provision has been particularly problematic for Spotify because the company has a free ad-supported business that it wants to make easy to use for customers. But Spotify ultimately wants customers to sign up for a premium service. To get around Apple's anti-steering rules, the company literally says, "You can't upgrade to Premium in the app. We know, it's not ideal." (see screenshot to the left)

Apple opened up the "single link" option recently after Japan's Fair Trade Commission started an investigation. But for Spotify, being able to integrate an in-app purchase option that isn't subject to that 30% fee would be a game-changer because it'll make it easier to convert more of its free service customers into paid subscribers.

Spotify could be leveling the playing field

One big advantage Apple has always had over Spotify is the integration between its software and hardware -- or in this case, between its ownership of the payment system and its ownership of apps like Apple Music and Apple Podcasts. Unquestionably, it's easier to sign up for paid subscriptions to Apple's apps with Apple's form of payment, which is why the company doesn't want apps steering customers to other in-app payment options.

It isn't just about the 30% fee though. When Spotify was forced to use Apple's payment system, it gave up the ability to gather information about its customers. Apple closely guards information like users' email addresses, demographics, phone numbers, and even street addresses. Spotify could try to collect that data by getting users to sign up outside of the Apple ecosystem or by asking the questions directly, but it was certainly forced to jump through hoops compared to the process for signing up for Apple's own apps.

If Spotify can make signup and payment simple for new users and collect data directly, the streaming company will not only be able to avoid the 30% fees, it should gain more insights about its users that will help it serve up more effective ads. And that's where Spotify's revenue and profit growth could come from.

Slowly, Apple's grip on its App Store and payments is being loosened, and that's great news for companies like Spotify. Whether it's in music or podcasts, it has been fighting an uphill battle against Apple's competing apps and payment rules for years. Now that some of those restrictions are being lifted, Spotify may have a chance to build an experience that matches or beats Apple's own offerings. Don't underestimate the impact this could have on Spotify, especially as it spends hundreds of millions of dollars to try to take on Apple in the booming podcasts business.