Stick with the leaders.

It can be tempting to overlook the titans dominating the technology landscape. After all, many are up thousands of percentage points just in the past decade. But overlooking them could be a mistake. Companies that have grown to dominate an industry tend to maintain that advantage for a long time -- even in technology.

That's why I think the three top tech stocks to buy right now are Apple (AAPL 0.19%), Adobe (ADBE -0.24%), and Nvidia (NVDA 1.25%). They may not be a secret to Wall Street, but they are all gigantic, well-capitalized innovators that are set to dominate in the years ahead. Here's why. 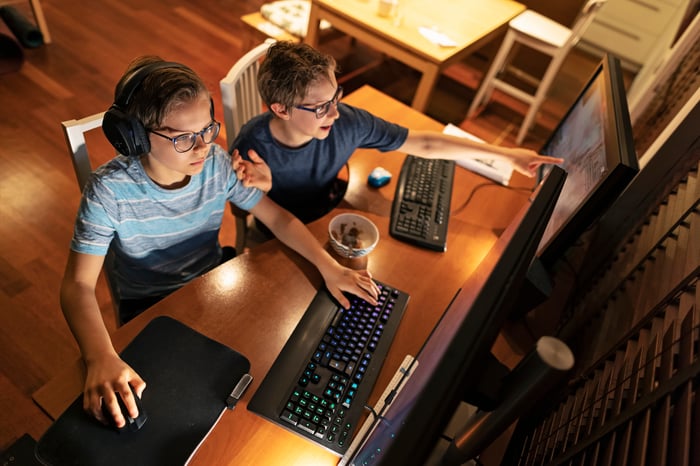 There's no use introducing a company with close to a $2.5 trillion market capitalization and a smartphone that claimed 64% market share in the United States. As it introduces a new lineup of phones, tablets, and accessories this week, everyone knows the company is a powerhouse.

It revolutionized the mobile device industry when it migrated from computers to smartphones. And it now envelops consumers in its ecosystem of services, including video, audio, and payments. Customers love it all. According to a survey from mobile phone site sellcell.com, the iPhone 12 boosted the company's brand loyalty to 92%.

But the company has made some unwelcome news lately. In a high-profile ruling, a judge deemed its App Store legal but said the company can't force people to pay for items through the marketplace. That will dent the 30% cut the company takes as commission. That cut is part of the $64.7 billion in service revenue Apple has generated over the past 12 months. It's about the same amount as Spotify, Visa, and Netflix combined.

As Apple keeps churning out devices that customers want, users become more and more entrenched in its ecosystem. That means more high-margin service revenue for the company and profits for shareholders. Investors stuck in the past will miss out as they watch Apple's valuation continue to expand to better reflect its new business model.

Adobe is best known for its software that lets creators design and deliver digital experiences. It has powered revenue to $14.4 billion over the past 12 months. That's up 240% over the past decade, with net income up 570%. As of the six months ending with June, almost 90% of that revenue is subscription-based. The company operates in three segments: its digital media, digital experience, and publishing and advertising. The three represented 76%, 23%, and 1% of revenue, respectively, last year.

Digital media is made up of the creative cloud, as well as the document cloud products. Creative cloud is a collection of more than 20 apps, including Photoshop and Illustrator -- two seminal packages in any creative professional's toolkit. The document cloud facilitates scanning, sharing, editing, and signing to get work done from anywhere, anytime. The digital experience segment is designed to power online businesses. Although sales growth slowed during the pandemic, the stock is up 96% since the beginning of 2020. 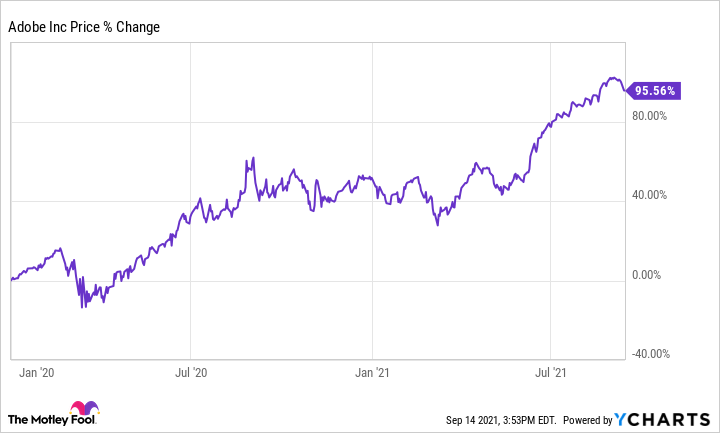 So far this year, business has gotten back on track. The first two quarters of the year saw revenue grow 26% and 23%, respectively. That is in line with the pre-pandemic rates.

Despite a $308 billion market capitalization, management believes it has plenty of growth ahead. It pegs the combined addressable market at $147 billion -- more than ten times its trailing 12 months sales. In a world that is increasingly online, Adobe is perfectly positioned. Investors should ride the wave of e-commerce and digitization to profits and stock gains in the years ahead.

Nvidia is a remarkable story of a company at the cutting edge of one industry able to leverage its technology to leap to the front of emerging fields. It began with the best graphics cards on the market for gaming on personal computers. Those applications required intense computational power. That led to an architecture for graphical processing units (GPU) that is now the standard in several of the most promising technologies around. Those include artificial intelligence and data science, autonomous vehicles, robotics, and virtual reality to name a few.

Its industry leadership is showing up in both the financial results and the stock price. Since 2016, revenue is up 337% while net income has risen 1,050%. Wall Street hasn't fallen behind. It's pricing in a lot of future growth. The stock has risen by 2,600% in that time, growing to a market capitalization of $556 billion. 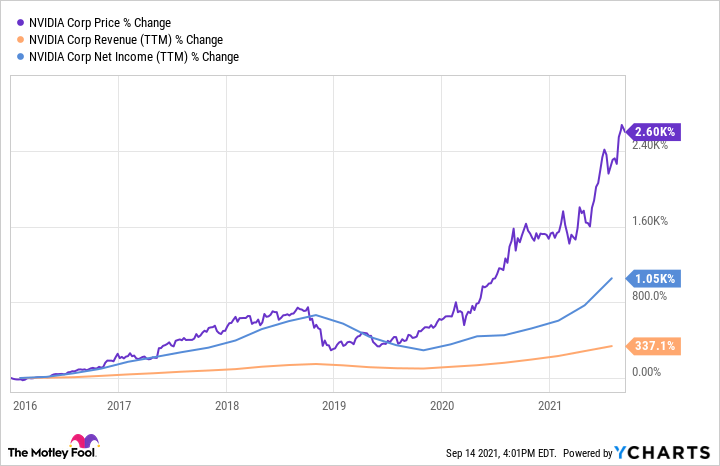 One year ago, Nvidia shook up the semiconductor industry by agreeing to purchase ARM Holdings. Rather than building its own microprocessors, ARM designs them and licenses its technology to others for manufacturing. It had about 1,550 licenses as of 2019 and aims to increase that by 100 per year.

Virtually all of the world's smartphones contain components designed by the firm. The combination would create a path for Nvidia to have a hand in designing the guts of devices ranging from smartphones and wearables to smart cars, servers, and products that make up the so-called "internet of things".

Without ARM, Nvidia should continue to lead the way in cutting-edge applications with its powerful GPUs. Add in ARM and the company could legitimately become the most influential semiconductor company in the world. Although the valuation is steep -- 26 times the last 12 months' sales -- it's hard to see shareholders losing over the long term.