This e-commerce company is sitting on a tremendous opportunity and is cheap to buy.

Chewy's (CHWY 1.28%) underperformance in the stock market so far in 2021 seems a tad surprising, given the impressive growth in its business. Share prices of the online pet retailer have dropped more than 18% this year, driven mainly by a negative perception of the company's prospects in a post-pandemic scenario.

There have been concerns about Chewy's ability to sustain the terrific momentum it enjoyed last year. Pet parents resorted to online shopping for pet food and supplies in 2020 as the pandemic raged. Chewy benefited from this, as its customer count swelled and spending on its offerings increased. 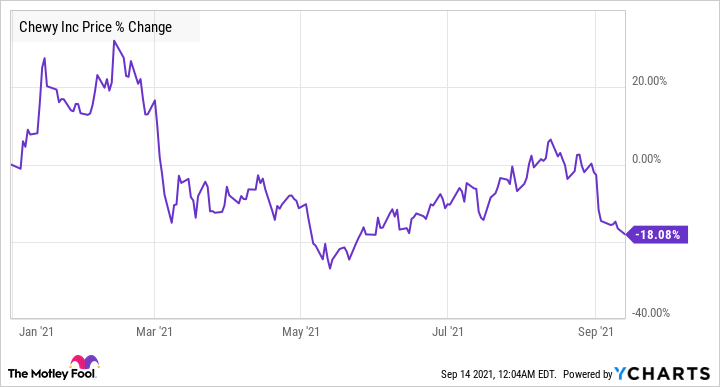 However, a sell-off in tech stocks earlier in 2021 and disappointing fiscal second-quarter results (released on Sept. 1) have wrecked Chewy's stock market momentum in 2021. But this is a golden opportunity for investors looking to buy a high-growth company on the cheap. Let's see why.

Chewy is showing no signs of slowing down

Chewy's Q2 revenue increased nearly 27% year over year to $2.16 billion. The company also reported a 2 percentage-point increase in the gross margin to 27.5%, as compared to the prior-year period. Adjusted earnings before interest, taxes, depreciation, and amortization (EBITDA) came in at $23.3 million, a 50.5% increase over last year. The adjusted EBITDA margin expanded 20 basis points year over year to 1.1%.

The company also reduced its net loss in half to $16.7 million during the quarter, with the adjusted net loss coming in at $0.04 per share. Wall Street was looking for $2.17 billion in sales and a loss of $0.01 per share. Chewy missed those estimates by a whisker, but it's worth noting that it delivered robust growth last quarter.

Chewy also reiterated its full-year guidance of $8.9 billion to $9 billion in revenue, which would translate into 25%-26% growth over last year. Additionally, the company's adjusted EBITDA margin is on track to increase between 80 basis points and 120 basis points this year. However, there's a good chance that Chewy may end the year on a stronger note. 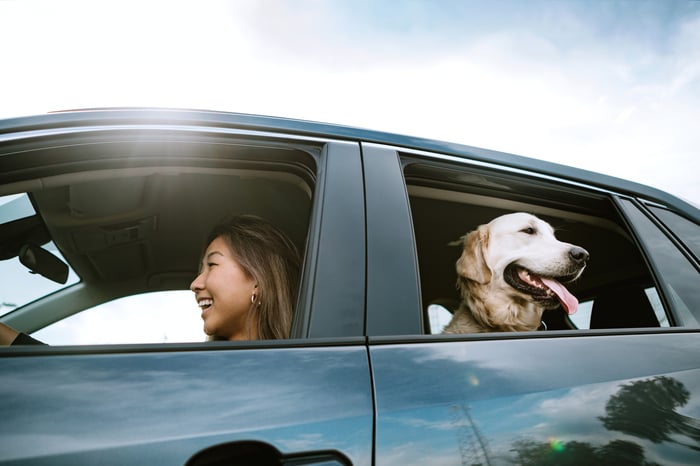 Two solid reasons why the momentum will continue

Chewy finished Q2 with an active customer count of 20.1 million, a 21% jump over the year-ago period. The company also reported a 13.5% year-over-year increase in net sales per active customer to $404. The growth in these metrics is a clear indication that pet parents continue to flock to the online channel to buy supplies online, even after COVID-19 restrictions have been lifted.

Investors may be worried about a drop in the pace of customer growth last quarter. But the growth in spending per active customer indicates that Chewy's top-line growth won't be running out of steam. Chewy saw a double-digit percentage increase in net sales per active customer (NSPAC) last quarter, with the metric crossing the $400 mark for the first time in the company's history. The company pointed out in its letter to shareholders that "both the year-over-year and sequential NSPAC increases were the largest in the company's history."

More importantly, this metric has room to run much higher, as Chewy customers typically spend more on its offerings with time. According to the company's June shareholder letter:

For context, our customers historically spend over $400 with us in their second year, compared to approximately $700 in their fifth year and almost $900 in their ninth year. As such, we believe that we still have a significant future share of wallet gains left to realize from a substantial component of our customer base.

Meanwhile, the relative slowdown in Chewy's customer additions last quarter shouldn't be a concern for investors. That's because online sales of pet products account for 30% of the total market in the U.S., according to market-research provider Packaged Facts. In 2015, only 8% of pet product sales were through the online channel in the U.S. By 2025, 53% of pet food and supplies in the U.S. are expected to move online, indicating that Chewy's addressable market will keep growing.

Additionally, Packaged Facts points out that Chewy has a 41% share of the online pet products market in the U.S. So the company is in a solid position to grow its customer base and take advantage of the end market's growth.

Investors looking to buy a growth stock at an attractive valuation are going to love Chewy because the company trades at 3.9 times sales, which is lower than its 2020 price-to-sales ratio of 5.6. What's more, it may not be long before the stock regains its mojo, as Chewy's top and bottom lines are expected to improve substantially in the coming years.

Additionally, Chewy stock isn't very expensive when compared to the S&P 500's average price-to-sales ratio of 3.2. It's worth noting that S&P 500 components recorded 20% revenue growth in Q2, which was slower than what Chewy registered.

All of this tells us why Chewy may turn out to be a top long-term investment. It would be a good idea to take advantage of its tepid stock market performance in 2021 by buying more shares before it breaks out.

Why Chewy Stock Is Falling Today

Don't Let This 1 Number Scare You Away From Chewy