Moderna (NASDAQ:MRNA) is one of the hottest biotechs on the market thanks to its rapid development of a functional coronavirus vaccine. Fueled by astronomically high predictions of its vaccine revenue, the stock continues to ascend higher and higher.

If you're like me, you're just a little bit bitter that you missed your chance to capture these stellar gains by investing early. But we can use these regrets to become stronger investors -- figuring out when we should have bought in, and calculating how much we could have made, can help us make better choices next time. Let's start by evaluating when the company might have shown up on our radar for the first time. 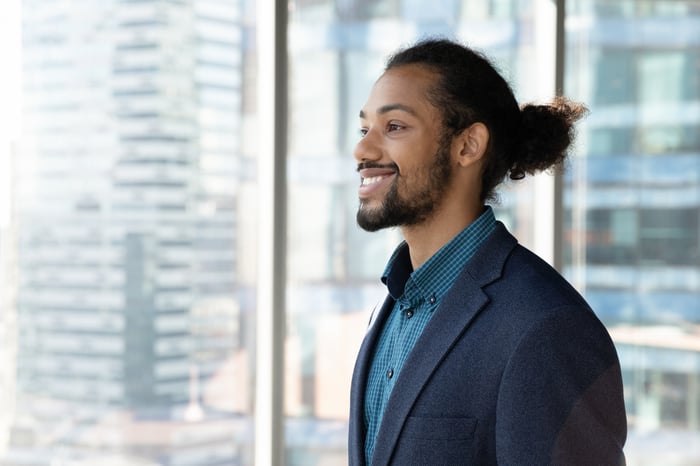 With an abundance of fanfare, Moderna went public in late 2018, and it was the largest biotech initial public offering (IPO) in history at the time. The company already had a reputation for a frothy valuation thanks to significant fundraising with the help of its venture capital partners. And, while its development pipeline was notably large for a company of its size, it had no projects that were anywhere close to yielding revenue.

Still, there were a few reasons to find the company appealing at the time, starting with its then-unproven mRNA technology platform. In particular, management had already started to accentuate critical capabilities like the potential for rapid and inexpensive research and development (R&D) compared with that necessary for older non-mRNA vaccine technologies like modified adenoviruses.

The company demonstrated those capabilities by initiating and advancing a slew of new clinical projects throughout 2019. But without an emergency like the pandemic, it would have been quite hard to appreciate the true value of Moderna's technology platform at the time.

Given the fact that no mRNA medicines had ever been approved for sale before 2020, investors like myself were leery of the heightened technological and regulatory risks. So, it's hard to say that Moderna was any more or less attractive than the plethora of other speculative biotech stocks of its era. In other words, you probably shouldn't feel bad for not investing in 2019. 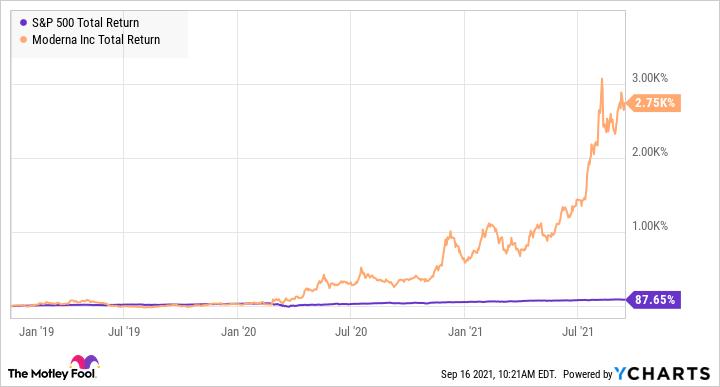 Of course, to get that return, you would have needed to recognize the company's potential, which would have been difficult for an average investor, as I mentioned earlier. But even if you'd waited longer, instead deciding to buy a few shares of the company in April 2020 after its early start on the coronavirus vaccine, you'd still be making out like a bandit right now.

Back then, the stock's price was around $46, and it had already started to ramp up as a result of the intensifying pandemic. At the time, the valuation of the stock might have scared you off, as Moderna had no earnings or significant revenue. If that didn't dissuade you, though, your $2,000 investment would now be worth more than 823%, having reached roughly $16,739.

Sometimes it's better not to worry about being too late

To be clear, Moderna was still a speculative purchase in April of 2020. At that point, wise investors were hedging their bets by making small positions in a handful of different vaccine developers. Nonetheless, even conservative investors had a significant opportunity to get a huge return from this stock.

Even if you waited until January of this year to make a purchase, you'd still be sitting on a massive return. And by that point, it was quite clear that Moderna was going to be one of the first companies to get its vaccine commercialized. That may even have led many people to conclude it was too late to buy the stock by that point, thinking the market may have priced in its future vaccine revenue. But that wasn't the case; the stock is up nearly 300% since then. .

The first lesson here is that if you discover a worthwhile stock too early, you might not recognize it as a winning investment. So, it's reasonable to make a small initial bet, then invest more later on. With Moderna, that would have been a highly profitable strategy.

The more important lesson is that once you've identified a winning investment, you probably have quite some time to make a purchase, and the window may be open for much longer than you suspect. Strong companies tend to demonstrate their strength persistently over time, so you don't need to be too hasty.