The risk keeps building for the app-based broking platform, and much of it is self-inflicted.

Technology is constantly changing the way consumers purchase goods and services, but when we look back several years from now, app-based investing may turn out to be the most impactful to young people's finances.

Robinhood Markets' (HOOD 3.34%) trading app is the poster child for this shift, plugging tens of millions of first-time investors into the financial markets through their smartphones in a simple and user-friendly way.

But the company faces mounting pressure from regulators about the way it generates revenue, and from shareholders who might be questioning its controversial pivot into cryptocurrency markets.

Robinhood's stock is down 41% from its all-time high; here are two big reasons to avoid it anyway. 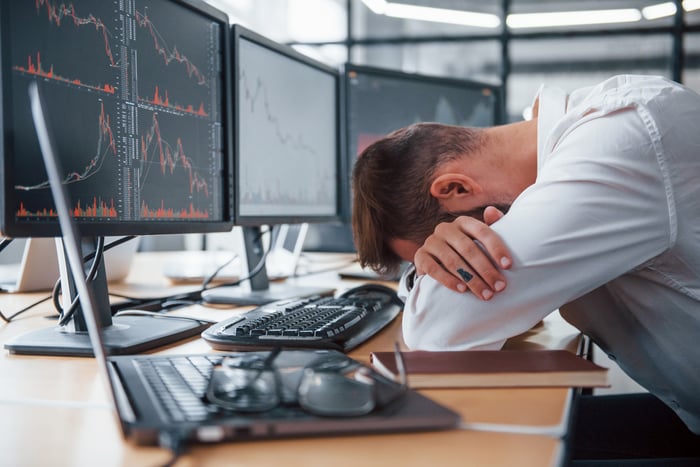 The Robinhood platform rose to prominence by offering commission-free stocks and stock options to its clients. But in a very rapid shift, 51% of its transaction-based revenue now comes from those clients trading in the more speculative cryptocurrency markets.

There might be a legitimate case for investors adding leading cryptocurrencies like Bitcoin to their portfolios in small amounts, but unfortunately that isn't what Robinhood customers are doing. The recent second-quarter earnings release revealed that 62% of the platform's crypto-related transaction revenue came just from Dogecoin, a novelty token heavily promoted on social media through memes and tongue-in-cheek posts.

But with a $40 billion market capitalization, Dogecoin is no laughing matter. Investors who own the token could find themselves disappointed by its lack of adoption as a payment solution compared to existing technologies, especially as its price continues to fall.

Robinhood's user interface has attracted scrutiny from lawmakers in the past for its "gamified" features, which were said to encourage risky behavior in the markets. With the surge in speculative cryptocurrency trading, those concerns might now be renewed.

But there is a larger, equally concerning risk to using Robinhood and other cryptocurrency trading platforms. In Robinhood's second-quarter earnings disclosure, it mentioned that it can't get insurance to protect all of the $22.7 billion in cryptocurrencies held by its customers. If the platform is hacked, or if Robinhood loses control of those assets for other reasons, customers may have no way to recover all of their money.

On Sept. 14, the chairman of the Securities and Exchange Commission (SEC) reiterated his intention to regulate the cryptocurrency markets, which was met with support from many lawmakers on Capitol Hill. For Robinhood shareholders, an increasing reliance on crypto trading might understandably trigger extreme concern.

2. Payment for order flow is under fire, again

If the previously mentioned regulatory landmines weren't enough, the method by which Robinhood makes over 80% of its revenue -- what's known as payment for order flow -- is also facing regulatory scrutiny, yet again.

Robinhood sells its customers' market orders to third parties, known as market makers, who stand ready to execute them quickly and in high volumes -- at a price. That price comes in the form of "spread," or the difference between what the buyers pay and what the sellers receive, and the SEC found it cost Robinhood customers $34.1 million in hidden fees from 2015 to 2018.

A traditional broker matches its customers' orders with another participant in the market, and the broker charges the customer a small commission for that service. Robinhood is able to boast a zero-commission user experience by instead using a payment for order flow model, but customers might be paying more than traditional commissions without even knowing it.

Robinhood often argues that payment for order flow gives customers better pricing in the market -- and that's how it should work if market makers are forced to compete for the order flow by offering the best pricing. However it appears market makers are instead simply paying Robinhood to route its customers' orders to them, and the fear is that most orders just flow to the highest bidder.

In fact, as a result of the inquiry mentioned above, Robinhood paid a $65 million penalty to the SEC in part for failing to satisfy its duty of best execution.

Payment for order flow is banned in many large jurisdictions, including the United Kingdom, Canada, and Australia. Additionally, the European Union considers it counter to the rules. Now U.S. lawmakers are questioning the SEC about when it intends to place further restrictions around the practice, in what might be a very nervous period for Robinhood shareholders as the outcome is determined.

But even if the practice remains in its existing form, investors should be wondering how large Robinhood can grow to be if it's confined only to the U.S., given any move to markets like the U.K. or Europe would likely mean abandoning the zero-commission model.

The risk might far outweigh the reward for this stock.