Please ensure Javascript is enabled for purposes of website accessibility
Log In Help Join The Motley Fool
Free Article Join Over 1 Million Premium Members And Get More In-Depth Stock Guidance and Research
By Alex Carchidi – Sep 17, 2021 at 6:49AM

Not every investing strategy has to involve trying to beat the market.

If the idea that you might see a significant fraction of your portfolio's value vanish due to falling share prices is the sort of thing that can keep you up at night, you're not alone.

For some people, the key to peaceful sleep is as simple as keeping a highly diversified portfolio, which minimizes the risk that any single declining stock or sector can pose to your overall holdings. But for investors who are still sitting at the breakfast table with bloodshot eyes even after diversifying, a more conservative approach of picking lower-risk stocks may be warranted.

These three companies are long-standing, profitable, and generally successful competitors in their crowded industries. You probably shouldn't count on them to beat the market every year, but their businesses aren't going anywhere, even if the world changes dramatically. 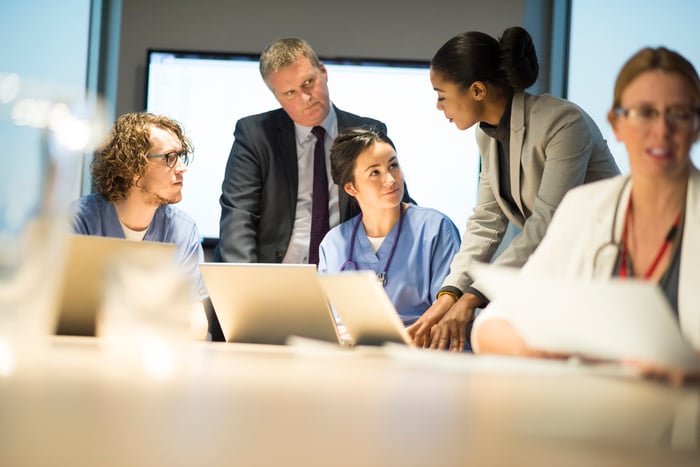 Pfizer (PFE -0.16%) is a low-risk investment because it makes so many medications that millions of people worldwide need.

Even before it made its multibillion-dollar coronavirus vaccine, it was one of the world's largest pharmaceutical companies. Its drug development pipeline is massive, and it's packed with programs at every stage of the clinical trial process; it has 23 programs in phase 3 trials alone.

Right now, Pfizer is waiting on regulators to weigh in on its request to commercialize at least six wholly new medicines and two requests for expanded indications. Assuming they earn approvals, those programs will provide it with a considerable inflow of fresh revenue over the next few years.

Given that it conducts so much research, the company is no stranger to setbacks in the clinic -- but no single failure will be enough to put much of a dent in its share price. Further, its management is keen to protect shareholder returns, even when that means making major changes, such as its recent spin-off of its generic drug manufacturing division.

In sum, Pfizer has demonstrated a consistent ability to bring drugs from the laboratory to the clinic and eventually to the market. For a pharmaceutical stock, it doesn't get any better.

CVS Health (CVS 0.47%) is effectively one of the pillars of the U.S. healthcare system. Through its network of retail locations within reach of nearly 85% of the country's population, it sells everything from toothbrushes to groceries to prescription medications. And with a market cap of about $111 billion, it's among the larger companies in the world.

Even if any given individual store proves unprofitable to operate, the public will always need consumer healthcare goods and pharmacy services, so the business model as a whole is highly robust. Likewise, while there are a few large competitors vying with it for market share, CVS is able to defend its customer base by offering loyalty programs and walk-in clinics, and by occupying valuable real estate in regions where it's scarce.

Furthermore, the company doesn't need to worry much about new entrants into its markets. Few upstarts have the ability to maintain supply chains on a national scale, never mind the acumen to deal with insurers and healthcare professionals.

In sum, CVS is positioned to maintain its margins while deepening its service offerings to increase revenue over time, and it's hard to imagine a future where the company isn't relevant.

You may not be familiar with Becton, Dickinson (BDX 1.55%), but it's just as important to hospitals as CVS is to consumers. The company produces a vast array of equipment and disposable items for hospitals, ranging from gauze to cardiac stents to sophisticated diagnostic devices. It also supports the biotech and pharmaceutical industry's all-important research and development efforts with its catalog of research instruments and chemical reagents.

In short, there are several lines of business that Becton, Dickinson and its investors can rely on through thick and thin. What's more, it doesn't need to do a huge amount of R&D of its own to keep selling to its customers.

After all, the gauze pad of today is fundamentally the same as the gauze pad from 20 or 30 years ago. Therefore, while some items in its catalog might not be the most lucrative products, their contributions to Becton, Dickinson's revenue base are fairly stable, and there isn't much incentive for its long-time customers to switch to a competitor's version.

And that's the strategy that makes Becton, Dickinson a market leader in many of its product segments. Thanks to the economies of scale it enjoys due to its global customer base, its competitors are unlikely to be able to offer substitutes for many of its products at lower costs or with superior features. So, you can bet on Becton, Dickinson being able to maintain its profit margins for quite some time -- a crucial attribute for a safe investment.

Scared of a Bear Market? Buy This Rock-Solid Stock Now
351%