Although cutting-edge technology companies tend to garner the majority of investor attention in today's market, there are plenty of less exciting businesses with long runways for growth that trade at attractive prices. Two of those companies are Sprouts Farmers Market (SFM 1.20%) and Nelnet (NNI -0.09%). 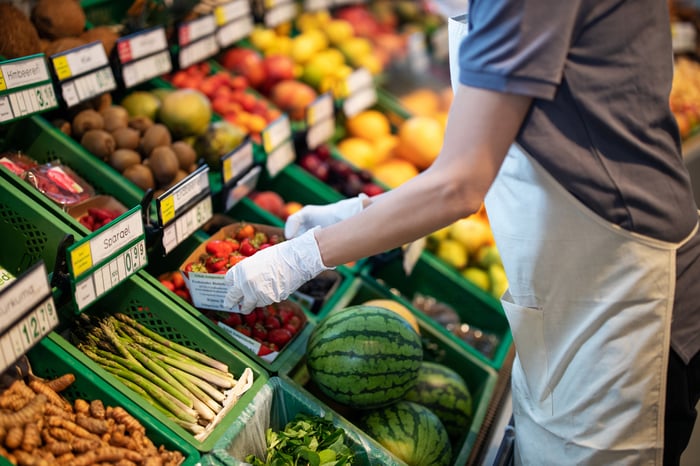 Sprouts Farmers Market is a health-focused grocery chain operating 363 stores throughout the U.S. Though it offers a wide variety of items much like any other store, it differentiates itself from the rest of the grocery industry thanks to its farmer's market-like design with low displays and a produce-centric layout.

Beginning in 2019, Sprouts embarked on a new strategy spearheaded by recently hired CEO Jack Sinclair. The strategy's primary objectives emphasized cleaning up the company's balance sheet, setting the groundwork for rapid store expansion, and shifting its target customer base away from coupon clippers to more health-conscious consumers. So far this plan seems to be bearing fruit.

Over the last two years, Sprouts has reduced its long-term debt by roughly 50% while simultaneously boosting its cash balance by more than 250%. Additionally, during the last 12 months, the company opened two new distribution centers in Colorado and Florida. Sinclair said that with both of these centers operational, "we now have 85% of our stores within 250 miles of our DCs."

But the distribution centers don't just help existing operations by shrinking delivery times and improving overall produce freshness. They also serve as a focal point for new store expansion. With these now in place, management used the latest quarterly conference call to reiterate its plans to grow its store count by 10% starting in 2022.

While the big acceleration in store count growth has been set aside for next year, the company is taking steps to maximize shareholder value in the meantime. Given that Sprouts' stock is currently valued at just seven times its trailing-12-month operating income, the company's board of directors authorized a $300 million share repurchase program in March of this year. At the company's current market cap of $2.6 billion, exercising the entire buyback would increase shareholders' claim to the company's earnings by more than 11%.

Whether it's through more share repurchases or new stores, Sprouts looks poised to drive great shareholder returns in the coming years.

Nelnet is a diversified conglomerate headquartered in Lincoln, Nebraska. Though the company operates in a quiet manner, its management team has demonstrated a remarkable ability to allocate capital. In fact, over the last 17 years, Nelnet's book value (assets minus liabilities) per share has compounded at an annual rate of more than 17%.

The company got its start as a student loan servicing operation but eventually graduated into originating loans of its own. For a long time, this was a lucrative place to be since loans that were written under this particular program were backed by the federal government, limiting the lender's risk. However, around 2009, the federal government decided to take this operation in-house, leaving Nelnet with a massive outstanding loan portfolio that still had to be paid back.

Today, Nelnet continues harvesting cash from that slowly shrinking loan book and as of the latest quarterly report, the company still expects to receive yet another $1.5 billion from it by 2026. With these large sums of cash coming in, management has and continues to redeploy the money to its variety of other investments, most notably its segment known as "Nelnet Business Services" (NBS).

While the name doesn't have much of a ring to it, it's actually a stellar business. Comprised of nine separate brands, NBS offers a range of different educational software and payments-related services. Together, NBS generated $311 million in revenue over the last 12 months -- up 29% as of the most recent quarter -- with greater than a 30% operating profit margin. Based on management's track record, investors should expect this segment to also grow through further acquisitions, as management added two new companies last year alone.

But Nelnet is also allocating capital elsewhere. Last year, it opened and launched a new bank in Salt Lake City, Utah, funding it with an initial sum of $100 million. Additionally, the company has several other private investments ranging from venture capital initiatives to real estate and solar projects that are carried at a value of more than $500 million on Nelnet's balance sheet.

Like Sprouts Farmers Market, Nelnet currently trades at a price-to-trailing-12-month operating income of under 10 times and management continues to buy back its own shares periodically. All in all, Nelnet's a durable and diverse company run by capable management with a proven track record, and it's trading at far too cheap of a valuation.