Cisco Systems (CSCO -1.96%) held its investor day on Sept. 15. Investors should pay close attention to this event as the tech giant discussed its long-term vision and announced new business goals. Here are three essential takeaways from the event.

Over the last decades, Cisco has been dominating its core networking market. During its fiscal year 2021, which ended on July 31, revenue reached $49.8 billion, up 1% year over year. The company generated growth from its massive footprint in networking and adjacent areas, such as cybersecurity and collaboration. In comparison, its rivals Juniper Networks and Arista Networks generated $4.6 billion and $2.6 billion of trailing-12-month revenue, respectively. 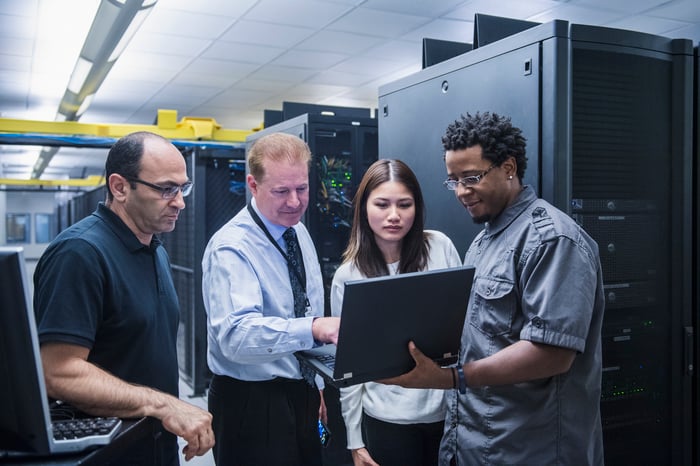 However, Cisco's immense scale has a downside: The potential for growth in the company's core total addressable market, which management estimated at $260 billion by 2025, has become limited compared to its competitors.

But during the investor day, management highlighted the company's market expansions. Cisco addresses high-growth areas such as hybrid work, full-stack observability (comprehensive monitoring of computing infrastructures and applications), cybersecurity, and the Internet of Things. Developing these key markets should increase the company's total addressable market, or TAM, by an extra $140 billion, reaching $400 billion by 2025.

Of course, Cisco will still have to provide strong execution over the next several years to remain relevant in its existing and new markets.

Given its large and growing opportunities, management forecasts revenue to reach a compound annual growth rate of 5% to 7% by 2025. That means Cisco's top line should reach $62.9 billion in fiscal 2025, based on the midpoint of the outlook. Also, executives anticipate adjusted earnings per share to match revenue's CAGR of 5% to 7%.

Investors should note that these goals remain modest, though. Forecast revenue growth slightly exceeds the estimated 5% growth of Cisco's current TAM. But it stays far behind the anticipated 18% CAGR of the company's expansion markets. In addition, EPS growth, in line with revenue growth, suggests increasing scale won't lead to improved profitability because of extra investments.

Given these reasonable growth expectations by fiscal 2025, and considering that the company reached the goals it had announced during its previous investor day in 2017, I expect the company's long-term plans to materialize.

As a consequence, Cisco's dividend, which currently yields an attractive 2.6%, seems safe.

Unsurprisingly, management confirmed its intention to return at least half of the company's free cash flow to shareholders, as it did in fiscal 2020 and 2021, with dividends and share buybacks at 59% and 61% of free cash flow, respectively. In addition, solid long-term mid-single-digit revenue and profitability growth should lead to dividend increases.

What's more, Cisco can sustain its dividend during a potentially prolonged recession. At the end of July, it accumulated a comfortable safety net of $24.5 billion in cash, cash equivalents, and investments, compared to $11.5 billion of total debt.

Overall, given Cisco's mid-single-digit revenue growth outlook, you should not expect the stock to deliver spectacular returns.

Yet you should consider adding it to your list of stocks to buy in September. It offers a safe, attractive, and growing dividend for dividend-oriented investors. It also trades at reasonable forward enterprise value-to-sales and forward price-to-earnings ratios of 4.3 and 16.7, respectively. Thus, Cisco's valuation seems inexpensive in the context of the company's realistic long-term growth plans.