Stocks with game-changing growth potential can grow exponentially in a matter of years, but among the many companies aggressively pursuing growth today, only a handful seem capable of making it through the stock gyrations and hitting the coveted $1 trillion market capitalization by 2035. After all, only five companies have made it to the $1 trillion club so far, so unless a company is already growing like a weed and has convincing catalysts ahead to sustain that momentum, it's hard to make it that far.

To be able to get your hands on a potential trillion-dollar company early in the game is a dizzyingly tempting idea, though, so I dug deep into the hundreds of stocks with a market capitalization of more than $100 million to see which ones could go that far. I found four stocks that have a really good chance of making it. Read along.

COVID-19 pandemic is a boon for this stock

Many use Visa (NYSE:V) cards, but few are aware of the kind of growth the company can enjoy in coming years. 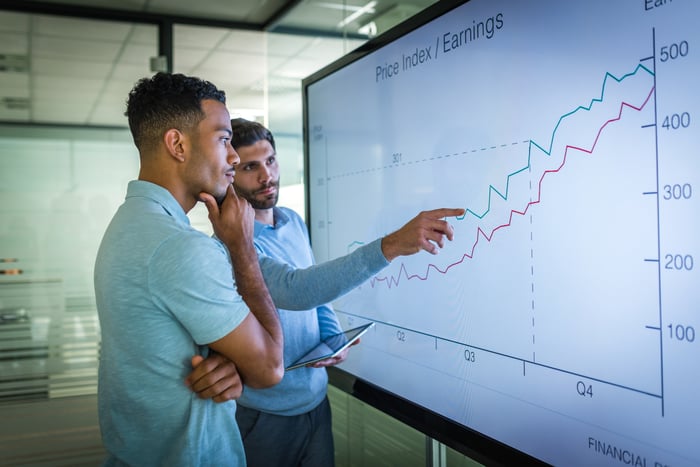 These are all secular trends that Visa knows how to exploit, given its dominance in the payments processing space with 3.6 billion cards issued under its name as of the last quarter.

Management has clear-cut plans to grow shareholder wealth: Capture growing consumer payments and value-add markets through acquisitions and new services, pay out 20% to 25% of annual earnings per share in dividends, and repurchase shares with remaining cash. Visa's attempt to acquire fintech company Plaid may have fallen through on regulatory concerns, but it's a fine example of Visa's hunger for growth.

Visa is already a cash-cow machine thanks to a low-capital, high-margin core business, and it generates operating margins north of 60%. With the pandemic forcing economies to go cashless and online, Visa, with its market cap of $492 billion, should be able to hit $1 trillion long before 2035.

I am going to make my boldest $1 trillion contender pick yet: It's a utility with a market cap of $165 billion.

Yes, you read that right, but I strongly believe NextEra Energy (NYSE:NEE) will become the first utility stock in the U.S. to join the $1 trillion club by 2035.

NextEra Energy's stock price has risen more than fivefold in 10 years, and even more in dividends, which have risen every year for more than 25 years. Now if the company could achieve that kind of growth when renewable energy was still in its nascent stage, imagine where it could be once countries start working toward their net-zero emission goals. 137 countries have already committed to these goals, mostly by 2050. 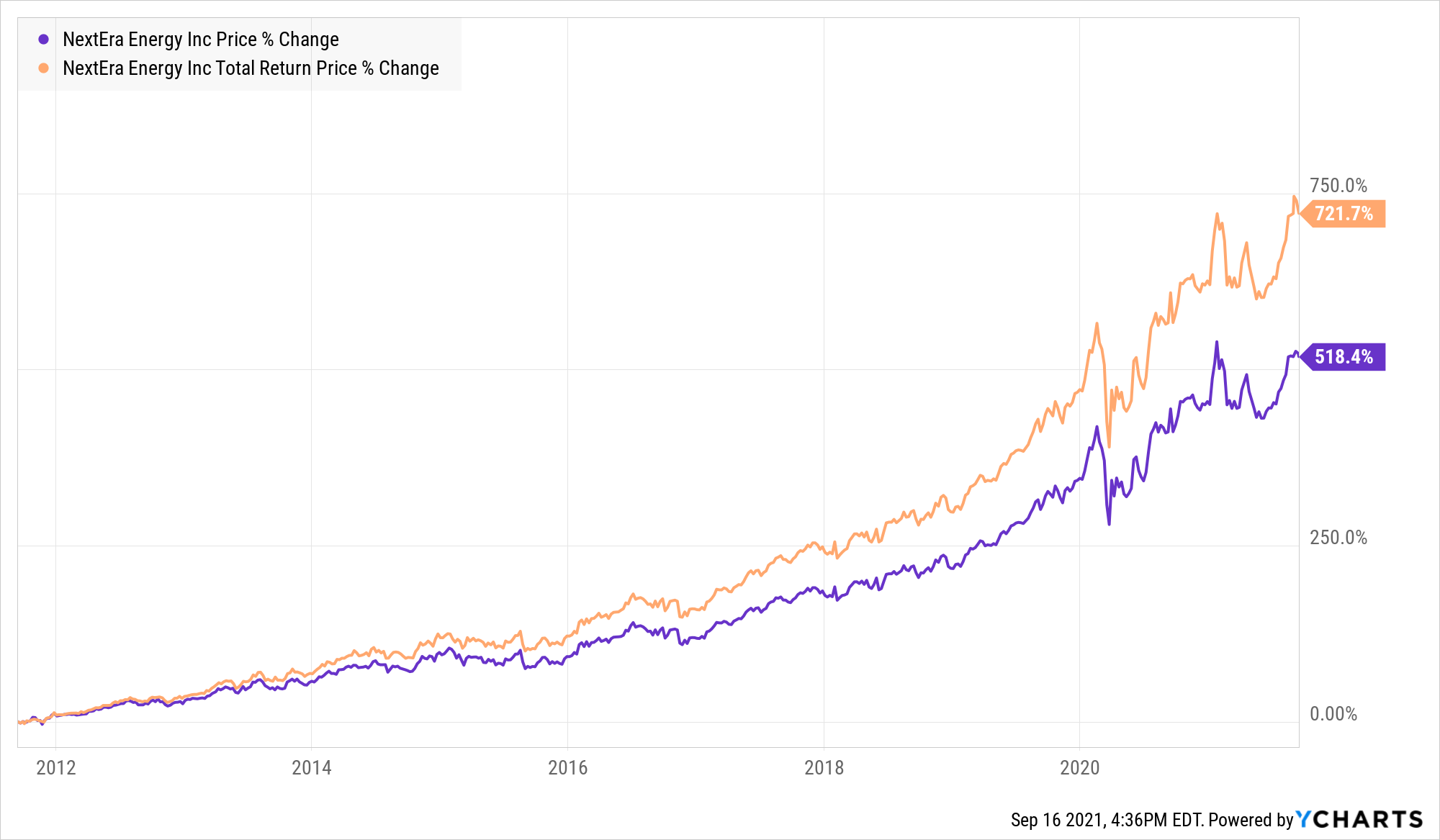 Statista projects that the global renewable energy market will cross $1 trillion as early as 2027, up from only $613.8 million in 2020. Projections through 2025 from the International Energy Agency's Renewables 2020 report are even more notable:

Now consider this: NextEra Energy's subsidiary Energy Resources is already the world's largest producer of wind and solar energy and has a backlog of 16.7 gigawatts (GW), which means near-term growth is already built into its portfolio.

To top that, NextEra Energy's Florida Power & Light company is a steady cash-flow machine, and its affiliate NextEra Energy Partners a steady source of funds. Then there's the opportunity in green hydrogen, which alone could be a $12 trillion market by 2050.

There's another reason why NextEra has me excited: Growth via acquisitions. After its failed bid for Duke Energy, I'm sure NextEra Energy is on the lookout for the next big merger or acquisition opportunity, which could speed up this top renewable energy growth stock's journey to $1 trillion.

This company is beating the best in its game

Customer relationship management (CRM) has emerged as the fastest-growing software market, as a rising number of businesses now understand why digitizing customer management is critical to retain and gain customers in an ever-expanding virtual world. These stunning statistics reveal why Salesforce.com's (NYSE:CRM) market cap could easily grow fourfold to $1 trillion well before 2035:

Clearly, Salesforce has its pulse on the CRM market like none other. Salesforce uses artificial intelligence extensively, and its recent acquisition of business messaging platform Slack could be a potential game-changer, as Slack competes directly with Microsoft's Teams platform. Slack added a record net new 13,000 paid customers and had 169,000 total paid customers as of last quarter, including biggies like IBM.

As Salesforce is also already profitable, its journey toward a $1 trillion market cap should be easier if it can grow sales as projected.

These industries could explode, and so could this stock

Sea Limited's (NYSE:SE) market cap has grown at an astounding pace to $189 billion from only about $4.9 billion in October 2017. Past performance doesn't guarantee future results, but Sea Limited's market cap growth so far wasn't a fluke: It was backed by exponential growth in revenues and gross profit. And, if Sea Limited can continue to make a splash in the two big markets it's targeting, nothing can stop its stock from hitting $1 trillion. 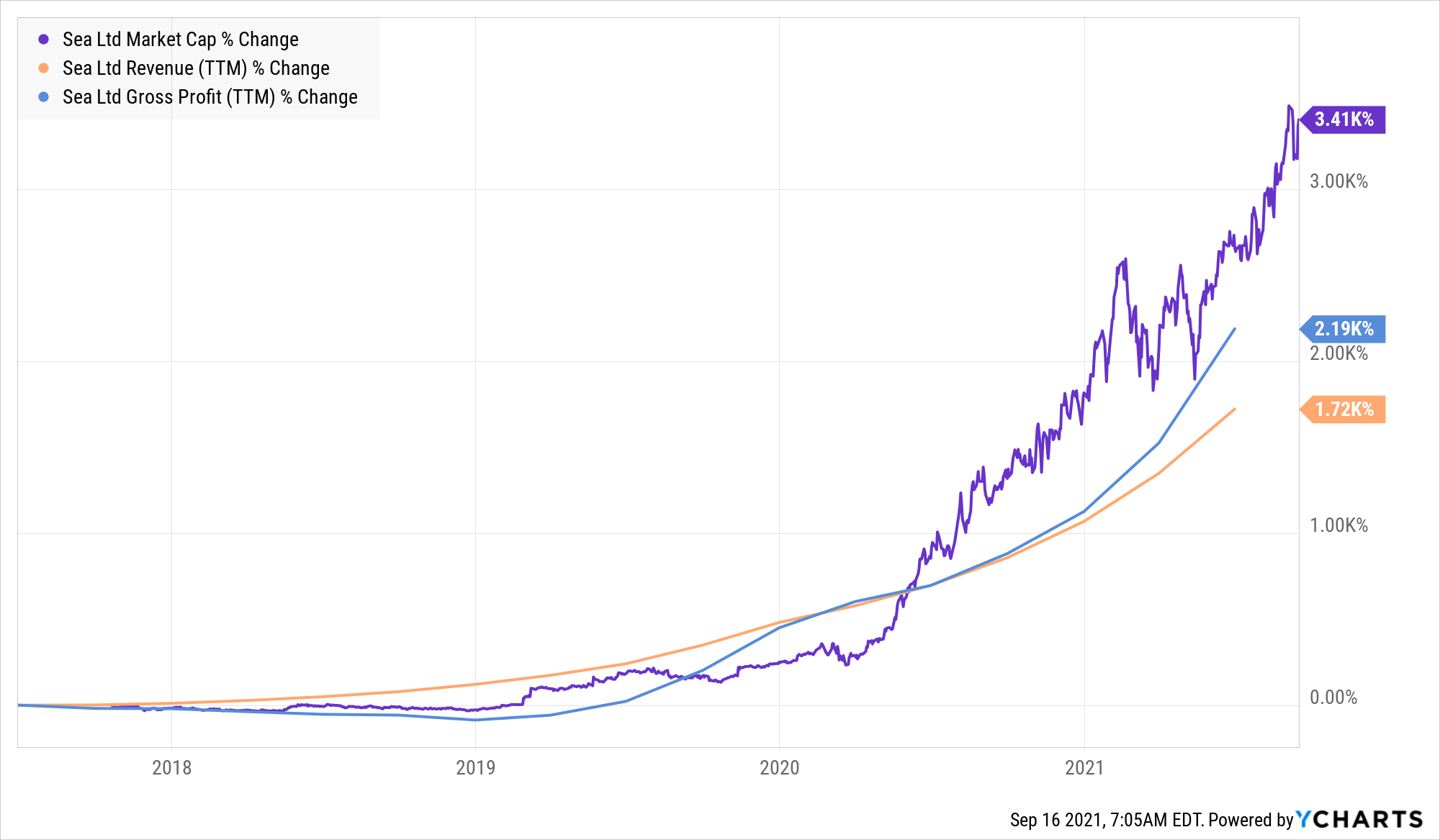 Sea Limited's integrated online platform forms the base of its three core businesses:

Here's how each business is faring:

If anything at all, these numbers indicate Sea Limited's growth potential.

Its flagship game Free Fire beat Tencent's (OTC:TCEHY) PUBG Mobile to become the world's third-most downloaded mobile game in August 2021. Shopee is already the leading e-commerce company in Southeast Asia and Taiwan, and is now expanding into Latin America, Europe, and even India. SeaMoney is growing beyond mobile payments -- it has already won a banking license in Singapore and recently acquired Indonesia's PT Bank.

Remember, though, Sea Limited's losses are swelling, and that's something that may not sit well with some investors. However, Sea Limited is a typical growth stock focused on customer and top-line growth, and has successfully monetized Garena to reinvest the cash into e-commerce and financial services beyond Southeast Asia. If you believe in the power of these two businesses, Sea Limited could be an enormous winner by 2035.