These companies are losing to the market in 2021. But under the surface, the businesses are revving up.

They've been great long-term performers, but shares of discount retailer Five Below (FIVE 16.55%) and autonomous vacuum company iRobot (IRBT 0.35%) are both underperforming the market averages so far in 2021. As of this writing, Five Below stock is up 9% for the year but down 20% from this year's high. For its part, iRobot stock is only up 1% for the year and down a painful 50% from highs reached in January.

I think these are blips for both Five Below and iRobot. Looking five years or more into the future, I believe both stocks will generate better returns than the market averages. This means investors don't need to wait for better prices. These are good stocks to buy now. Here's why. 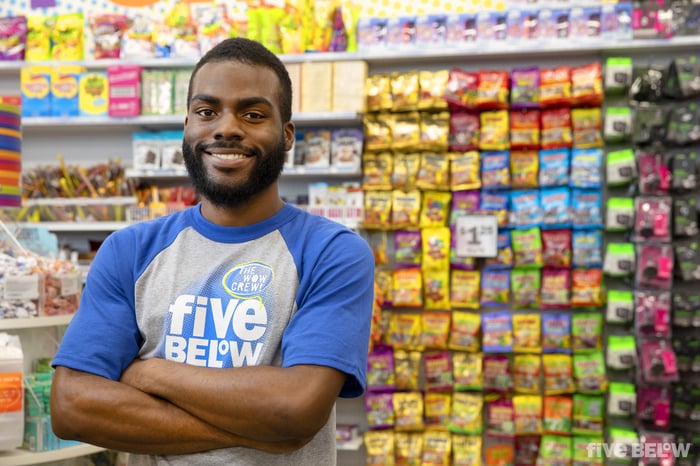 For those unaware, Five Below's concept is to sell products to kids and teens for under $5. While that might sound somewhat uninspiring, this is a retail chain that's resonated with consumers for years. Since it went public in 2012, same-store sales have increased every year except for 2020, when stores were closed because of the coronavirus -- but it's back to growth now. Moreover, the company is solidly profitable with net income rising at a 16% compound annual growth rate over the past five years.

There's good reason to believe Five Below's profits can continue to rise. The company plans to operate over 2,500 locations long term, up from 1,121 today. To support this growth, it had to build new distribution centers, a slight drag on financial results for now. But its center in Arizona just became operational in recent weeks, and another in Indiana should open within a year.

Importantly, these two new distribution centers can support 2,000 stores. Therefore, Five Below's profit margins should expand by gaining operating leverage as it expands from 1,121 locations to the 2,000 its infrastructure can support.

Five Below is a cash-flow generating business. And right now, the best thing it can do with its cash flow is open new locations as it's planning to do. Consider that the company invests $300,000 on average to open a store. But stores make $450,000 in annual earnings before interest, taxes, depreciation, and amortization (EBITDA).

This means that new stores pay for themselves in under a year. And, like a snowball rolling downhill, they start contributing to Five Below's growing cash flow. This should send Five Below stock higher sooner or later. 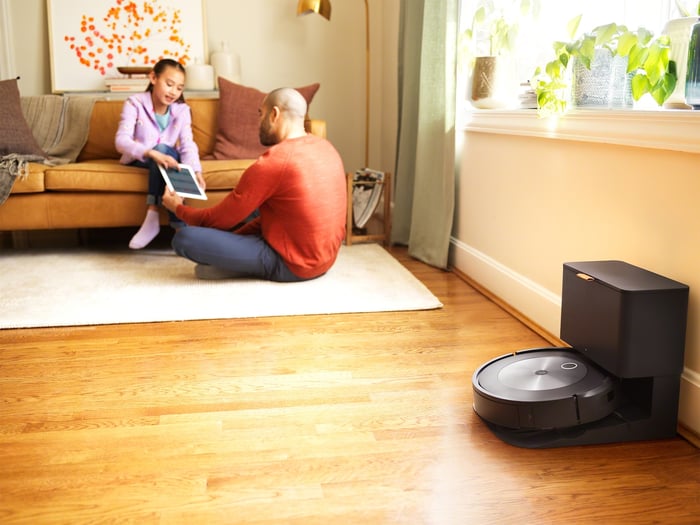 An iRobot Roomba in its dock. Image source: iRobot.

A business model changing for the better

iRobot is the market-share leader in autonomous vacuum cleaners. And to be clear, this is a market you want to lead. According to Meticulous Research, the robotic vacuum cleaner market could reach $15.4 billion by 2028 by growing at a 23.2% compound annual growth rate. Therefore, it stands to reason that iRobot's business will grow substantially over the next seven years.

Besides the growing market opportunity, iRobot is revamping its business plan for the better. It's trying to build a direct relationship with the consumer so that it can develop recurring revenue streams. The recurring revenue can take different forms, but one thing the company is experimenting with is Robot-as-a-Service. Simply pay a monthly rate to get a vacuum, an upgrade every three years, and all the replaceable accessories needed over that time.

This could potentially smooth out iRobot's revenue -- right now, sales can swing drastically from quarter to quarter. Moreover, once the company gets a loyal subscriber, perhaps it can come up with other high-margin, add-on services in time.

To establish this direct consumer relationship, iRobot launched its customizable operating software called iRobot Genius. To use the software, consumers have to enter an email address, which helps the company build its customer database. As of the most recent quarter, it had 11.6 million connected customers. That's an increase of 67% year over year and over 10% just since the beginning of the year. Clearly, the plan is working.

More than this, the iRobot Genius software appears to be a catalyst for improved customer satisfaction, a great indicator for the long-term health of this business. Consider that a good net promotor score (NPS) -- a widely used metric of customer loyalty -- is anything above 1 and that a perfect NPS score is 100. In June 2020, before the launch of iRobot Genius, the company had an NPS of 25, according to Comparably. The score was good, but not great. Now, it has an NPS of 42, a huge jump in customer satisfaction in a very short amount of time.

Given the growing market opportunity and its improving business fundamentals, iRobot stock looks like an absolute steal trading at under 20 times forward earnings. 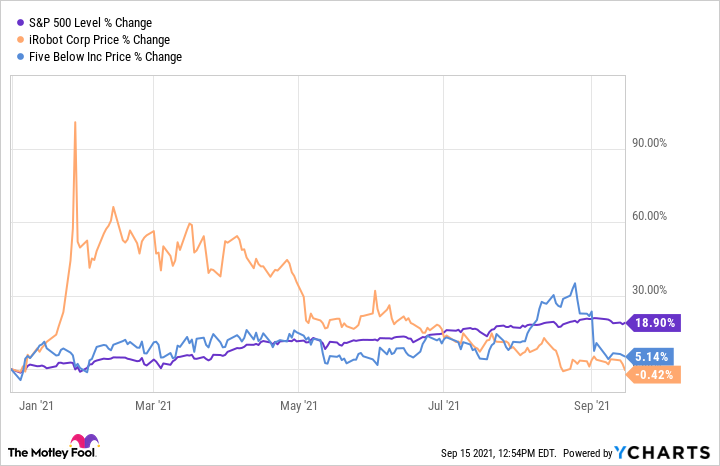 Year-to-date returns for Five Below and iRobot compared to the S&P 500. ^SPX data by YCharts.

Zoom out on these winners

Stocks that have underperformed the market average often make poor investments. You'll hear many investors say things like "Winners win." This maxim acknowledges that a stock price typically follows business performance. And businesses that have performed well in the past are great candidates for performing well in the future.

In this light, investors might be turned off to Five Below and iRobot since they've underperformed the market in 2021. But nine months isn't long enough to judge these stocks; all the great long-term winners go through periods of underperformance. Zooming out, both have been great for long-term investors. For this reason, I believe 2021 is just a blip on their long-term growth trajectories.