A different form of entertainment is set to deliver for shareholders.

Moviegoing will likely always be on many people's list of of things to do on a night out. But the pandemic decimated the industry in 2020, pushing global revenue down 71%. The need to stay at home drove sales of another popular activity -- video games -- past movies and music combined.

Despite the trends, traders became enamored with theater chain AMC Entertainment (AMC -7.49%) earlier this year. A combination of economic recovery and the traders' motivation to burn those betting against the stock fueled a rally lifting shares 2,000% this year. 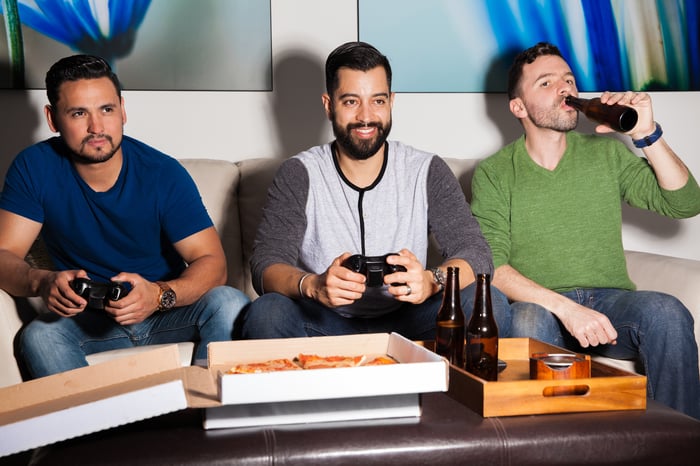 It's an interesting sideshow, but there are more reliable ways to grow your investment dollars in the entertainment industry. That's why we asked three Fool.com contributors which stocks they thought could quintuple over the next decade. They chose Unity Software (U -2.63%), Skillz (SKLZ -5.53%), and Ubisoft Entertainment (UBSFY 0.57%). Here's why.

The engine behind the gaming industry

Jason Hawthorne (Unity Software): Unity is somewhat unique in the video game industry. First, it's not just about video games. The company's real-time three-dimensional (RT3D) software is used by architects to rapidly iterate building designs and detect flaws. It has similar uses in auto manufacturing. In the film industry, it's reducing the time to create and edit digital scenes from days down to seconds. But it is a market leader in game development.

An astonishing 94 of the top 100 video game developers are Unity customers. As of the fourth quarter of 2020, 71% of the top 1,000 mobile games were made with the company's RT3D software. That's driven sales growth of 42% in both 2019 and 2020. So far in 2021, revenue has climbed 45% year over year. It isn't profitable, but Unity management has committed to becoming profitable on an adjusted basis in 2023. Over the long term, it believes it can maintain greater than 30% revenue growth. That time horizon could be far out in more ways than you think.

One of the more futuristic use cases of Unity's RT3D software is helping to create the metaverse -- a fully digital world beyond the analog one in which we live. Most define it as some version of living in the internet. Others simply define it as a perpetual augmenting of our existing reality. Either way, management believes it will be hundreds of thousands of destinations created by companies like Roblox, Nvidia, Facebook, and Adobe. Unity plans to be a major player in its creation and operation, and it's in the perfect position.

Unity is at the center of a powerful trend in entertainment. And it has a clear North Star. The company believes in reducing the distance and friction between creators and consumers. Succeeding on that front in both the real and virtual world should lead to a winning investment for shareholders.

An opportunity ripe for the picking

Jon Quast (Skillz): Skillz is a mobile gaming platform that allows developers to monetize their games without showing ads. It also lets users compete for cash prizes. The company has 447.2 million fully diluted shares, and the stock trades around $11 per share as of this writing, placing its fully diluted market capitalization at $4.9 billion. Therefore, if Skillz quintuples over the next decade, it would have a market cap of almost $24.6 billion. Here's why that's entirely possible but also why things could go terribly wrong.

First, consider the size of the mobile gaming market. Skillz estimates the market at $86 billion. Third-party research company Newzoo estimates it even higher, at almost $91 billion. Either way, Skillz is barely scratching the surface on its opportunity -- it had just $1.6 billion in gross marketplace volume in 2020. Moreover, mobile gaming is the only segment of the gaming industry that's actually growing, according to Newzoo.

Consider two ways that Skillz can increase its piece of the pie. First, the company doesn't have the technology to offer synchronous gaming, a requisite capability for a variety of game genres. But it just took a stake in synchronous-gaming leader Exit Games to accelerate development. Once it can offer this technology to developers, expect its library of games to increase dramatically.

Second, Skillz can expand internationally. The company is launching in India this year. According to Statista, the market in India was only worth $2.4 billion in 2020, but it was up 50% year over year and had more than doubled in just two years. Skillz plans to take advantage of this high-growth market and will also look to other international markets in 2022.

Furthermore, Skillz doesn't just have plans to increase its piece of the pie, it actively expects to grow the pie itself. Much has been written about the company's partnership with the National Football League. But I'd like to highlight that this isn't so much about gaming as it is a creative way for a brand to engage its audience. In the future, Skillz expects all brands will develop competitive interactive platforms, growing the overall gaming opportunity. Skillz management talks about this in a big-picture way by saying it's building "the competition layer of the internet."

Skillz should not have any problems growing its user base substantially over the long term. And yet, it is struggling. This to me is the biggest red flag for the company. The following table shows what its user metrics have looked like since the company went public.

The big picture is Skillz has spent almost $350 million on sales and marketing over the past 12 months. But it's only added 114,000 paying users and has lost 300,000 active users. Perhaps competitive mobile gaming isn't as big of an opportunity as it first looks -- or maybe this is just a temporary blip. Either way, if Skillz is going to be an investment that quintuples over the coming decade, user growth needs to start consistently heading in the right direction.

This underdog could crush expectations

Keith Noonan (Ubisoft Entertainment): If you asked 100 investors to name the best company in the video game industry, you might not get too many people naming Ubisoft. The France-based gaming publisher has been posting relatively uneven performance in recent years, and it typically lags significantly behind Activision Blizzard and Take-Two Interactive when it comes to sales and earnings. While it's hard to make the case that Ubisoft is positioned as the top player in the industry, it could still wind up being one of the best video game stocks.

Best known for franchises including Assassin's Creed, Rainbow Six, and Ghost Recon, the company looks attractively valued compared with many other players in the gaming space. The stock is now down roughly 31.5% year to date, and it trades down 41% over the last three years.

Ubisoft has a collection of bankable franchises and a stable of tested development and marketing teams. It is also valued at less than 15 times 2021's midpoint operating earnings target. That's despite it not being a banner release year for the company. Ubisoft has seen some key titles underperform over the last several years, and it appears to be going through something of a reinvention phase. However, the business still has some great resources at its disposal, and it should be able to return to much better growth if it has quality releases and takes advantage of growth opportunities in mobile.

These characteristics also make the company a potential acquisition and could help to put a pricing floor on the stock. That limits downside risk. Video game companies have been hot acquisitions targets over the last year because their software commands levels of engagement that trounces pretty much every other entertainment medium and because the industry still has a very strong long-term growth outlook. With the stock cheaply valued and offering big upside, Ubisoft has what it takes to serve a win for shareholders.