The mega backdoor Roth IRA is a tactic that can supercharge your retirement savings and help you shelter investment growth from taxes in retirement. Using the mega backdoor could allow you to contribute up to $38,500 to a Roth IRA per year. The House Ways and Means Committee thinks it's a loophole that only benefits wealthy Americans, and it should be closed.

In its recent tax proposal to help raise funds for President Joe Biden's $3.5 trillion social infrastructure plan, the committee includes several changes prohibiting both the backdoor Roth IRA and the mega backdoor Roth IRA. Specifically, it "prohibits all employee after-tax contributions in qualified plans and prohibits after-tax IRA contributions from being converted to Roth regardless of income level."

Here's how these changes might affect your retirement savings plans. 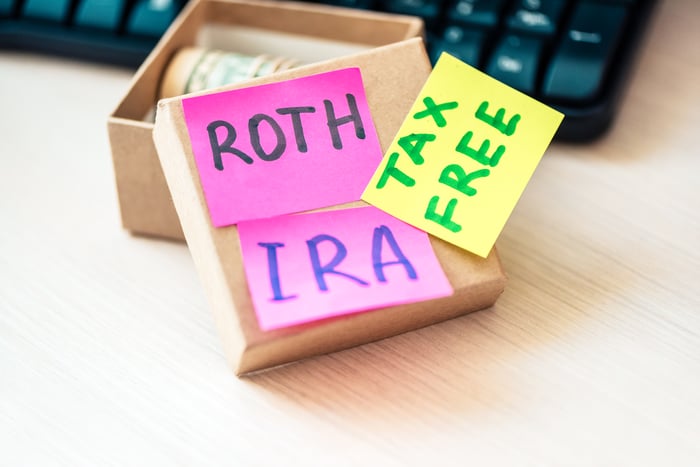 Some plans allow you to immediately convert those after-tax accounts into a Roth account, which means you'll never owe another dime of taxes on those investments. Other plans require you to wait until you depart your job, but you can then convert only the after-tax portion of the account to a Roth while converting the growth to a traditional IRA.

The tactic is called the mega backdoor Roth IRA because it allows you to move a massive amount of cash into a Roth IRA every year.

No more IRA for you

The new tax proposal effectively makes contributing to an IRA of any type unappealing for savers above those income thresholds. Individuals will no longer be able to convert those contributions to a Roth IRA.

There are better tax advantages to be had by investing in a regular brokerage account than keeping after-tax funds in a traditional IRA. Not to mention the additional flexibility of keeping investments outside of a retirement account.

Why does Congress want to close these loopholes?

Congress views the mega backdoor Roth and backdoor Roth as ways for wealthy individuals to avoid paying their fair share in taxes. Indeed, you have to make a certain level of income in order to afford to contribute more than the maximum tax-advantaged contribution to a 401(k).

Congress is looking for ways to raise taxes on the wealthy in order to fund government spending on expanded social programs. While these changes won't produce an immediate boost to tax revenue, they could provide future governments with more money as retirement savers are forced to put more of their savings in taxable investment accounts.

When those investments grow and account holders sell to fund their retirement, the government will collect some taxes. With the mega backdoor Roth, investors wouldn't pay any tax on those sales.

That said, Biden promised not to raise taxes on families making less than $400,000 per year. There's a big gap between making enough to use the backdoor Roth and mega backdoor Roth tactics and $400,000 per year. While there's no immediate impact on taxation for those households, this certainly feels like a tax increase. So, additional changes to the tax code may be necessary to help Biden keep his promise.