These three stocks have been building momentum for several years.

Smart investors try to take out as much risk as they can from their portfolio decisions by finding companies that are riding market trends. These companies have stocks with great momentum -- from an individual standpoint.

Lithium Americas (LAC -2.30%), Microsoft (MSFT -2.19%), and Square (SQ -3.00%) all have had triple-digit percentage share growth over the past three years because they're in the right businesses at the right time. Lithium Americas mines for lithium, a key component in the batteries for electric vehicles and so many technical devices. Microsoft's bet on cloud computing is paying off big-time, and Square's fintech innovations have spawned tremendous growth.

Let's find out a bit more about these three supercharged stocks. 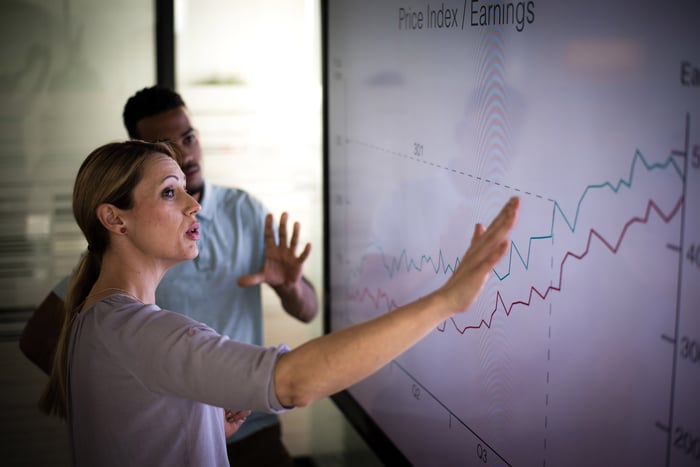 1. The case for Lithium Americas

Share prices of Lithium Americas have been on a steady climb -- up 87% so far this year and up a whopping 406% over the past three years. The reason is simple: The mining company extracts lithium carbonate and lithium hydroxide, essential materials used for lithium batteries that are needed for the surge in electrical vehicles. A report by Deloitte projects that global demand for lithium will double or triple by 2030.

The demand for lithium batteries, not surprisingly, has driven up the costs of lithium. Lithium carbonate has risen from $15,750 in January to $18,950 per metric ton last week. Lithium Americas seems to have settled the legal struggles needed to get its Thacker Pass lithium mine up and running in Nevada. Thacker Pass is considered the most lithium-rich mine in the United States. The company also is pairing with Chinese company Ganfeng Lithium on the Cauchari-Olaroz lithium brine project in Argentina. Both projects are expected to begin producing lithium next year.

Lithium Americas' two projects are not producing any lithium yet, so it doesn't have any revenue. Obviously, investing in the company is risky. But if Lithium Americas' projections are correct, it would see $308 million annually in earnings before interest, taxes, depreciation, and amortization (EBITDA) from the Cauchari-Olaroz project, with a break-even point of two years. The Thacker Pass mine is a bigger deal, worth $520 million in annual EBITDA and a break-even point of 4.6 years. Both estimates are conservative, based on the price of lithium being $12,000 a metric ton, as it currently is going for $18,950 per metric ton. The company said it has $500 million in cash -- plenty of funds to begin operations on both projects. 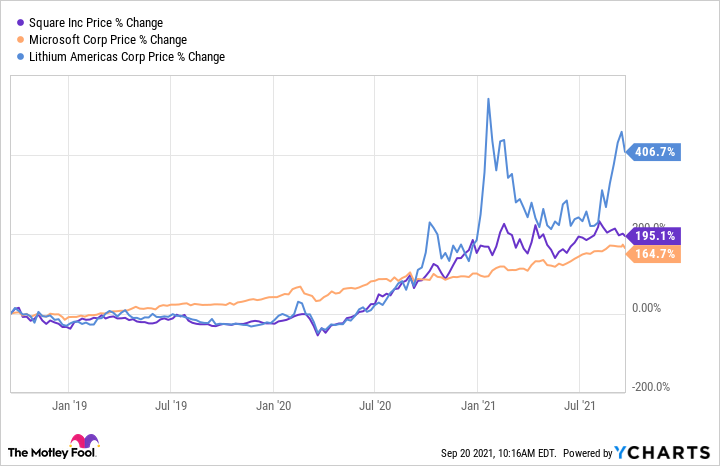 2. The case for Microsoft

Microsoft's share prices are up more than 34% this year and more than 164% over the past three years. The company just raised its dividend 11% to $0.62 per quarterly share. While the yield is only 0.83%, that's far superior to its other high-growth tech peers, many of which don't offer a dividend. The nearest comparison is Apple, whose dividend has a yield of 0.6%.

Microsoft's dividend is hardly the best reason to buy and hold the company's stock. It has increased revenue by 72% over the past five years, and in the most recent quarter, the fourth quarter of fiscal 2021, all of the company's positive numbers were up. The company reported that revenue was $46.2 billion, a rise of 21% year over year; net income was $16.5 billion, up 47% over the same period in 2020; and diluted earnings per share were $2.17, an increase of 49% year over year.

The big driver for Microsoft has been its edge in cloud computing. In its fourth-quarter earnings call, the company said its commercial cloud business, Azure, generated more than $69 billion in revenue in 2021, up 34% over 2020. Nearly every segment of Microsoft's business is connected to cloud computing.

On top of its increased dividend, the company has consistently had share buyback programs that make each investor's shares worth more because there are fewer shares in circulation. Over the past five years, Microsoft's earnings per share have jumped 40.24%. The company's board of directors just approved up to $60 billion in buybacks in a new share repurchase program.

3. The case for Square

Square's share prices are up more than 17% this year and more than 195% over the past three years. The company's innovations have allowed it to grow from a point-of-sale system that was great for small businesses to a company that has one of the best peer-to-peer payment platforms with its Cash App and considerable growth with larger companies through its Seller App.

These days, it seems the company is into nearly everything -- from food delivery to music streaming, to banking and crypto.

It's easy to see the path for more growth ahead with the company reporting subscription revenue at the half-year mark of $12.4 billion, up from $6.4 billion in the same period a year ago. Over the past three years, the company's quarterly EBITDA has risen 3,740%.

All three growth stocks have rewarded their investors handsomely over the past three years. The question is, if you don't already own shares of one of these companies, which one makes the most sense to buy $1,000 worth of shares in?

Lithium Americas has the most growth potential going forward, but obviously, that stock is a lot riskier at this point. There's a lot that can go wrong between now and when the company starts extracting lithium from their two projects. However, it has great long-term possibilities.

It's hard to say whether Microsoft or Square's stock is the better priced, based on a price-to-earnings (P/E) ratio. But looking at projected price-to-sales ratios, Square appears to be the better deal at this point, though Microsoft's size gives it a bigger moat against competitors. If I had to choose, I'd go with Square because its innovative fintech shows that it has the means to maintain its phenomenal growth rates.