The U.S. is truly a marvel when it comes to inventing new medicines. Despite being home to just 4% of the global population, the nation accounted for over 50% of new chemical entities and biologics developed over the past 20 years.

This may in part be due to a relative lack of drug price regulations. Unlike many other health agencies, the U.S. Food and Drug Administration (FDA) does not have the authority to set drug prices. The greater profit incentive spurs innovation.

But the regulatory environment could soon change. As vital as healthcare breakthroughs are, they often come at an enormous expense for patients. In fact, Americans pay between 50% and 750% more for the same drug as their Japanese, European, or Canadian counterparts. With a likely crackdown on drug manufacturers' power looming, let's look at why now could be a good time to ditch certain pure-play pharma stocks. 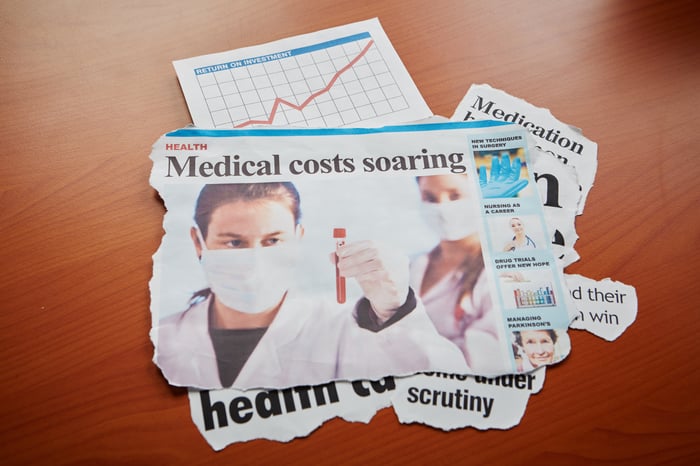 In Washington, D.C., several efforts are underway that could put pressure on drug manufacturers and change the healthcare landscape for investors.

The Senate is considering a bill that would index Medicare drug prices to the discounted prices paid by the Department of Veterans Affairs, according to STAT. What's more, the Biden Administration is backing direct government negotiations to set drug prices.

The U.S. Department of Health and Human Services just released a plan that calls for limiting drug-price hikes and out-of-pocket expenses for Medicare Part D. The plan also seeks to close loopholes that block generic drugs. Further, it aims for private insurers and employers to access medicine at rates set by the government.

The stock market seems to be paying attention. Year to date, the SPDR S&P Pharmaceuticals ETF is down nearly 10% compared to a gain of 18% for the S&P 500.

High cost of most drugs

The biggest surprise regarding these proposals is that there's nothing new about them. Many of these policies have been floated for years -- and it's easy to see why.

Take the case of Vertex Pharmaceuticals (NASDAQ:VRTX), a biotech company that develops treatments for cystic fibrosis. Its flagship product -- Trikafta -- is a first-of-its-kind, triple-combination therapy that improved patients' lung functions by 10% to 13% in clinical trials. Yet, Vertex charges an astonishing $311,000 for a one-year treatment course.

Were the company to slash the price of Trikafta by half, it would still be able to recognize a profit margin of over 20%. Investors though might see a sharp loss in the share price. Then there's Biogen (NASDAQ:BIIB). Three FDA advisors resigned earlier this year after the agency approved the company's Alzheimer's treatment, Aduhelm, despite weak evidence that it's effective. Biogen charges $56,000 a year for the drug. Congress is now investigating the matter.

The scale may finally be tipping in favor of patients as controversies -- and the medical bills footed by Americans -- pile up. Even though patients can buy drugs at seemingly discounted prices through their insurance, they ultimately pay more when insurers raise premium rates.

This leads to a ridiculous situation: Healthcare expenditures per capita in the U.S. are higher than in countries with universal healthcare even though the latter have higher tax rates.

Fortunately, it's not doom and gloom for every pharmaceutical company. Pfizer, Moderna, and BioNTech were able to quickly research and develop highly innovative coronavirus vaccines at affordable prices. What's more, the billions in revenue they brought in seems justified in exchange for the value of combating the pandemic.

Let's consider a similar analogy for biotech companies investigating cutting-edge gene therapy like CRISPR Therapeutics. The company is developing a one-time cure for genetic disorders like sickle cell disease. So even if it ends up costing upwards of $1 million before insurance, one could argue that its curative benefit outweighs its exorbitant price.

Ultimately, it seems that tougher regulations -- in one form or another -- are finally coming to the drug sector. So for now, it's best for investors to avoid buying shares of small to mid-cap pharma stocks, especially ones that make a smaller portfolio of prescription drugs with high costs and meager benefits.

It's quite likely that the golden age of investing in any and all pharma stocks is over. Instead, now's the time to consolidate your investments into innovative biotechs and safer big pharma stocks that are more diversified.