The SPAC is taking the electric scooter maker Gogoro public.

Poema Global Holdings (PPGH) didn't gain much attention from investors after its public debut in January. The SPAC (special purpose acquisition company) priced its shares at $10, but it remained below that level as investors seemingly lost interest in the flood of new SPACs.

For a SPAC to be a compelling investment, it needs to acquire or merge with a growing company. But many SPACs struggled to find viable targets, while others hastily merged with wobbly companies and exaggerated their growth potential.

However, Poema recently broke away from that pack of stagnant SPACs and gained the market's attention by announcing its planned merger with Gogoro, a Taiwanese electric scooter maker that also provides a subscription-based network of swappable batteries across the island nation of Taiwan. 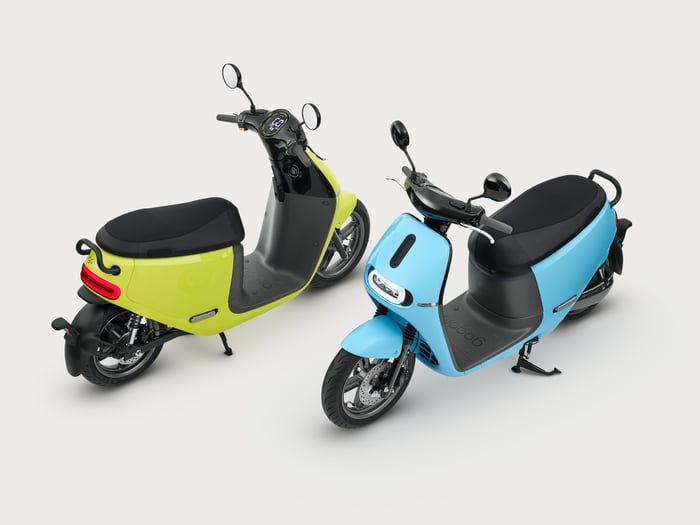 The combined company will have an enterprise value of $2.35 billion when the deal closes in the first quarter of 2022, and the new stock will trade on the NASDAQ under the ticker symbol "GGR." Let's take a closer look at Gogoro to see if it's a worthy investment.

What does Gogoro do?

Gogoro was founded ten years ago in Taiwan, which has the highest density of gas-powered scooters in the world. In 2015, Gogoro launched its first electric scooter, the Gogoro Smartscooter, which was tethered to a nationwide network of swappable battery stations in Gogoro's domestic market.

The company launched its Gogoro 2 Smartscooter in 2017, followed by its smaller Gogoro Viva scooter for overseas markets in 2019. Gogoro still generates nearly all of its revenue in Taiwan, but it plans to raise roughly $550 million from its merger with Poema and apply the proceeds toward its international expansion into new markets like China and India.

How fast is Gogoro growing?

Gogoro's products and services are innovative, but its recent growth has been sluggish. Its revenue fell 17% to $364 million in 2020, and it expects another 10% decline to $327 million this year.

The company's sales of electric scooters in Taiwan have been declining, partly due to a lack of new models and pandemic-related disruptions, and are offsetting its rising subscription-based revenue.

Its adjusted EBITDA declined 9% to $42.1 million in 2020, and it anticipates a 72% drop to $11.8 million this year as it expands its hardware business (new scooters and charging stations) at a loss.

Gogoro expects most of that growth to be fueled by its overseas expansion. Between 2021 and 2024, it expects its revenue in Taiwan to more than double from $320 million to $699 million, but combined revenue from China and India is projected to rise from about $7 million to $984 million.

Could Gogoro achieve those ambitious goals?

Based on those estimates, Gogoro's debut enterprise value of $2.35 billion would equal just 2.5 times its revenue and 16 times its adjusted EBITDA in 2023. In its presentation, Poema and Gogoro claim those valuations would make it much cheaper than other EV companies, as well as subscription-oriented growth stocks like Roku and Peloton.

However, investors should be skeptical of those estimates, since SPACs often provide overly bullish projections for their investment targets. Gogoro might enjoy a first-mover's advantage in its home market of Taiwan, but it doesn't have any significant experience in overseas markets beyond a handful of partnerships with third-party electric scooter makers yet.

Gogoro's plans to expand into China also leave it exposed to escalating political tensions between Taiwan and mainland China. If Gogoro's customers in Taiwan think it's kowtowing to China to gain customers, its domestic sales could crumble. If Gogoro's Chinese customers think the company supports Taiwanese independence, on the other hand, it could be boycotted or banned. Gogoro's scooters and charging network are also tethered to its mobile app, which leaves it exposed to China's new data privacy laws.

Poema's investors also shouldn't expect to have any meaningful voting power in the new company. Poema's shares will be converted to just 13.1% of the new GGR shares, while Gogoro's existing shareholders will retain 76.3%. Its PIPE investors and other sponsors will hold the rest.

Is Gogoro a worthy investment?

I bought a small position in Poema after the announcement, since I've personally seen how popular Gogoro is in Taiwan. But I'm skeptical about its long-term guidance, so I'll hold off on buying any more shares until Gogoro goes public and actually ramps up its expansion into China and India.