Which cloud software giant is the better investment?

Adobe (ADBE -0.58%) and Salesforce (CRM 0.75%) are two of the largest cloud-based software companies in the world. Eight years ago, Adobe started to transform its locally installed desktop software -- which included Photoshop, Illustrator, and Premiere Pro -- into subscription-based cloud services. It also expanded its cloud ecosystem with enterprise-facing sales, marketing, advertising, and analytics tools.

Salesforce, which was founded in 1999, disrupted the market for on-premise customer relationship management (CRM) software by launching its applications as cloud-based services. Like Adobe, it also expanded its cloud ecosystem with cloud-based sales, marketing, and analytics services.

I compared these two cloud giants last May, and concluded that Adobe's lower valuation, more consistent profits, and better diversification made it the better buy. Since I made that call, Adobe's stock has rallied nearly 70% as Salesforce's stock rose less than 50%. Will Adobe stay ahead of Salesforce over the next 12 months? Let's take a fresh look at both cloud software giants to decide. 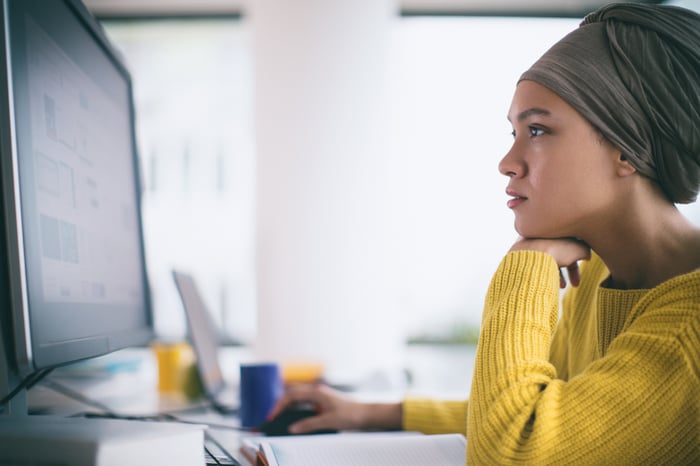 Which company has withstood the pandemic better?

Adobe's revenue rose 24% in fiscal 2019, which ended in November of that year, but grew just 15% in fiscal 2020 as demand from small to medium-sized business (SMB) customers fell throughout the pandemic.

But in the first nine months of fiscal 2021, Adobe's revenue increased 24% year over year as those headwinds waned. Its Digital Media (Creative Cloud and Document Cloud) and enterprise-facing Digital Experience businesses both generated stronger growth as the SMB market recovered.

For the full year, Adobe expects its revenue and non-GAAP earnings per share to rise 22% and 23%, respectively. Those stable growth rates indicate Adobe's annual subscriptions are sticky, and suggest most of its creative cloud products still have tremendous pricing power as industry-standard media tools.

Salesforce's revenue increased 29% in fiscal 2020, which ended in February of that year, and grew 24% in fiscal 2021. The company primarily serves large enterprises instead of SMBs, and so didn't face as many pandemic-related headwinds as Adobe. Larger companies still kept their CRM platforms online to manage their sales teams and customer relationships, and they still relied on Salesforce's other cloud-based services to monitor their online performance throughout the pandemic.

Salesforce's revenue increased 23% year over year in the first half of fiscal 2022, and it expects 24% sales growth for the full year. It expects its non-GAAP EPS to decline 11%, mainly due to a big tax-related benefit in 2021. Excluding that benefit, its forecast would imply 41% earnings growth.

Rosy expectations for the future

Adobe expects the total addressable markets for its Creative, Document, and Experience Clouds to expand significantly by 2023. However, it hasn't set any exact revenue growth targets for the next few years.

Salesforce also expects all of its end markets to expand as companies manage more customer relationships online, migrate more data to the cloud, automate tasks, and make more data-driven decisions. Last December, Salesforce predicted it would more than double its annual revenues to over $50 billion by fiscal 2026. It expects most of that growth to be organic, but Slack -- the enterprise communication platform it recently acquired -- could also generate $4 billion in revenues in fiscal 2026.

Investors generally prioritize revenues over earnings for cloud software companies, so I'd argue that price-to-sales ratios are more relevant to Adobe and Salesforce than price-to-earnings ratios.

Salesforce also trades at just five times its target revenues for fiscal 2026. Therefore, Salesforce seems like the cheaper play than Adobe right now, even though it trades at a higher forward P/E ratio.

Adobe and Salesforce are both great cloud software stocks. But this time around, I believe Salesforce has a brighter future because its business is less exposed to macro headwinds, it's setting up more ambitious long-term targets, and its stock is cheaper relative to its sales growth.