Amazon has added 450,000 workers since the pandemic's onset.

The coronavirus pandemic is creating a shortage of workers worldwide. For many industries, wages are rising modestly while on-the-job risks have increased substantially. To make matters worse for some employers, some countries like the U.S. have rolled out fiscal stimulus programs that have left some consumers with excess cash. And up until a few weeks ago, parents in several parts of the world had to stay home to take care of school-aged children.

Some of the effects causing labor shortages are fading away; many schools have welcomed children back for in-person learning and enhanced unemployment benefits in the U.S. expired in early September. That's just in time for the frenzied holiday season where employers hurry to add workers to fulfill increasing customer demand.

Throughout the pandemic, Amazon (AMZN -1.44%) has been attracting employees while others are having difficulty. Let's look at why Amazon is winning the battle for employees. 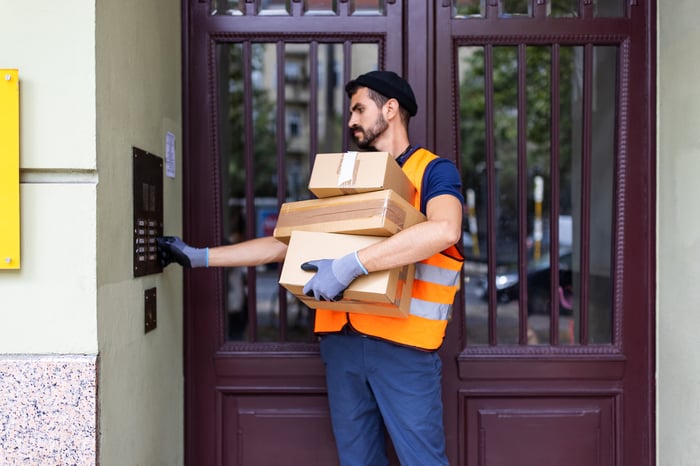 Interestingly, since the beginning of the pandemic, Amazon has hired 450,000 workers. Part of its success in this area is due to it staying open this whole time. While businesses in other sectors were forced to shut down temporarily, Amazon was deemed an essential retailer by local governments and it was allowed to continue operations. Therefore, folks who were let go, offered fewer working hours, or forced to take pay cuts looked to Amazon for consistent employment.

The e-commerce retailer has experienced surging revenue growth since the outbreak as people avoided shopping in person. Sales in its fiscal 2020 were 37.6% higher than fiscal 2019. And when your revenue is growing from around $280 billion to $386 billion as it did for Amazon, it requires a bigger team of workers.

Availability of consistent employment is not the only reason employees joined Amazon. After all, job openings have remained high for several months now, but other companies have difficulty filling roles. Amazon has rolled out several sweeteners to attract employees, and those special offers include paying for workers' college tuition, higher hourly wages, sign-on bonuses, and other enticements.

Amazon's offer to pay employees' college tuition came after rivals Walmart and Target made the same announcement. On the face of it, it may sound like a generous offer to employees. However, the companies can benefit because a college degree takes several years to complete, potentially keeping the employee with the company throughout the process.

On Sept. 14, Amazon announced it was looking to hire 125,000 employees in the U.S. at an average starting pay of $18 per hour, reaching as high as $22.50 per hour in some locations. Most of these jobs will be as warehouse employees at fulfillment centers -- entry-level positions with minimal pre-requisites needed. The pay is higher than the federal minimum wage of $7.25, enticing for entry-level workers.

Moreover, Amazon offers sign-on bonuses of up to $3,000 in some locations, plus qualifying employees receive health benefits from the first day of hire. In all, the suite of compensation makes it an attractive place for employees looking for stable work. Considering the rigorous productivity requirements for workers in its warehouses, the company must pay a premium to attract employees.

Amazon held a career day earlier in September, and the company says it has received over 1 million applications for employment since then. So what does it mean for investors as Amazon appears to be winning the battle for employees? It could mean Amazon has higher in-stock levels during the holidays than competitors. Additionally, it could offer faster shipping times with fewer delays and cancellations. In the longer run, as Amazon continues raising wages for employees, smaller retail operations may not be able to compete.