These pure-play cannabis companies are well-positioned to take advantage of their ripening industry, even before federal legalization arrives.

Investing in cannabis stocks requires patience and a strong tolerance for risk. It could be years before marijuana is legalized at the federal level. Until that occurs, many businesses in the sector will face some challenges, and their stock prices could reflect that too.

For Trulieve Cannabis (TCNNF 4.71%), Cresco Labs (CRLBF 7.04%), and Green Thumb Industries (GTBIF 6.54%), however, the limited legal market for cannabis in the U.S. isn't necessarily a downside. By expanding in key state markets that offer a limited number of licenses, these multi-state operators (MSOs) have boosted their revenues and profits. All three have consistently performed well in the last few quarters, and are the best marijuana stocks to buy this month. 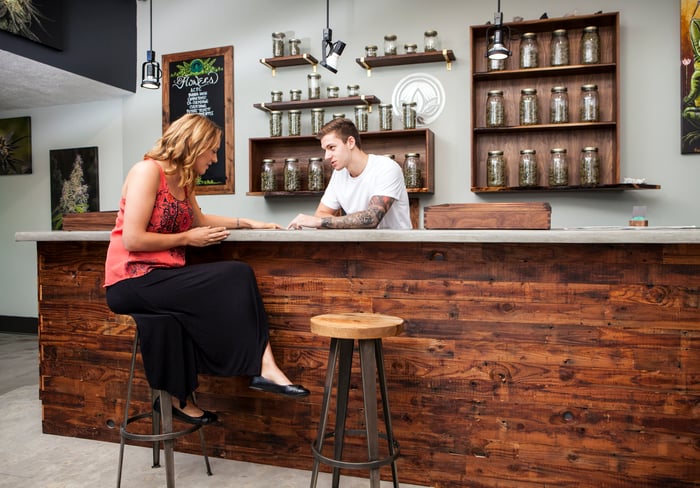 Trulieve's strategy of strengthening its position in its home state Florida has proved to be a smart move. Recently, the company opened two more stores in Florida, bringing it to 90 dispensaries there and 100 total nationwide.

This has allowed Trulieve to capture around 50% market share in the state, which has helped the company increase its revenues significantly. Even with the rise of other competitors in Florida, their market share has remained around 50% and has had consistent solid growth over the past year. In the second quarter, total revenue grew 78% year over year to $215 million. Most of that can be attributed to its medical cannabis segment. Consistent revenue growth has allowed the company to report its 14th consecutive quarter of net profitability. Adjusted earnings before interest, taxes, depreciation, and amortization (EBITDA) came in at $95 million for Q2, a 55% year-over-year jump, while net profits grew 16% to $41 million. Management expects the company will bring in about $1.2 billion in revenue and $461 million in adjusted EBITDA in 2021.

Trulieve's long-term success should also be bolstered by its $2.1 billion acquisition of Arizona-based Harvest Health & Recreation, a deal that was announced in May. Once that deal closes, Trulieve will have a total store count of 140 and 3 million square feet of cultivation capacity in the U.S.

This deal also provides access to Arizona, Pennsylvania, and Maryland -- potential key cannabis markets. Arizona recently legalized recreational cannabis, and sales should start there by 2024. Meanwhile, developments are ongoing in Pennsylvania and Maryland to legalize the substance for adult use. Strengthening its medical cannabis presence in these states will give a competitive advantage to Trulieve if cannabis is legalized at the recreational level.

After depending only on medical cannabis for a while now, the company is attempting (slowly) to advance in the recreational segment, which will strengthen its growth not only in Florida but also in other states. Trulieve launched a few high-margin cannabis derivatives -- including gels, chocolates, cookies, and brownies -- for medical cannabis patients in Florida in Q3 2020. In the meantime, though, its peers will be hard-pressed to come close to catching up to its position in the Sunshine State.

For Cresco Labs, the legalization of cannabis for recreational use by adults in its home state of Illinois has been a boon. The new law took effect in January 2020, and since then, cannabis sales in the state have soared. Through August, total recreational sales reached $874 million, and experts predict that total adult-use sales in 2021 will easily surpass last year's $1 billion mark.

Cresco Labs' total revenue rose by a whopping 123% year-over-year to $210 million in the second quarter. It generated $101 million in retail revenue, most of which came from its Sunnyside retail platform, according to the management. Cresco has 11 Sunnyside stores in Illinois. That sales growth also helped the company generate a positive adjusted EBITDA of $45 million. Its net income for the quarter was $2.7 million, a marked improvement from its $41 million loss in the prior-year period.

Cresco has 37 total dispensaries open in seven states. It is growing revenues consistently and its finances are sound, thus positioning it for further expansion.

Being based in Illinois has also benefited Green Thumb. In the second quarter, its revenue jumped 85% year-over-year to $222 million. The company's 58 operating stores contributed to this growth, most of which was derived from the key markets of Illinois and Pennsylvania. Green Thumb also reported profits of $22 million, versus a net loss of $13 million in the year-ago period. Q2 was its fourth consecutive quarter of profitability.

In July, Green Thumb entered the Virginia market when it closed its acquisition of cannabis grower and producer Dharma Pharmaceuticals. Virginia recently legalized recreational adult use of marijuana, but retail recreational sales won't begin there until January 2024.

Recently, Green Thumb opened its third store in New Jersey, bringing its nationwide total to 65 stores. Recently, New Jersey legalized recreational marijuana in February but retail sales won't begin until 2022. Establishing a market presence in these states will be beneficial for the company when retail sales begin. It holds licenses for 114 retail stores in 14 U.S. markets. Since cannabis is a highly regulated industry and is still illegal at the federal level, some states are very particular about issuing licenses. Securing a cannabis dispensary license involves lengthy rules and regulations, so holding additional licenses gives a competitive edge to cannabis companies.

All three of these businesses have solid balance sheets, positioning them to expand as more states legalize marijuana.

Based on their average price targets, Wall Street analysts see upsides for Trulieve, Cresco, and Green Thumb of 181%, 120%, and 84%, respectively, in the next 12 months.

Cannabis stocks, in general, have been struggling over the past few months. This is in part because investors haven't seen as much progress with marijuana reform as they expected. Considering their high growth prospects (with or without legalization), and the fact that all three of these stocks are trading over 30% off their 52-week highs, I think this is the right time for investors to scoop up these marijuana stocks at the dip. Investors who hold them for the long term should enjoy some fruitful returns.