The buzz is building with new luxury electric vehicles entering the market.

Chinese electric vehicle maker Nio (NIO -6.34%) just hit a new milestone at the same time that news came out of another upstart EV maker in the U.S. getting ready to jump in the game. With headlines about EV expansion swirling, Nio's American depositary shares are moving higher today. As of 10:45 a.m. EDT, Nio shares were 2.75% higher.

Investors have been watching Lucid Group (LCID 0.44%) this week as it opened its Arizona manufacturing facility to visitors and announced that it has begun production of its highly anticipated luxury electric sedans. That comes as Nio is getting closer to launching its own luxury sedan early next year.

Nio will not only launch in its home market of China, but also in Europe, by opening a Nio House in Oslo, Norway. Nio Houses are available exclusively to Nio vehicle owners and include a showroom and cafe, among other amenities. 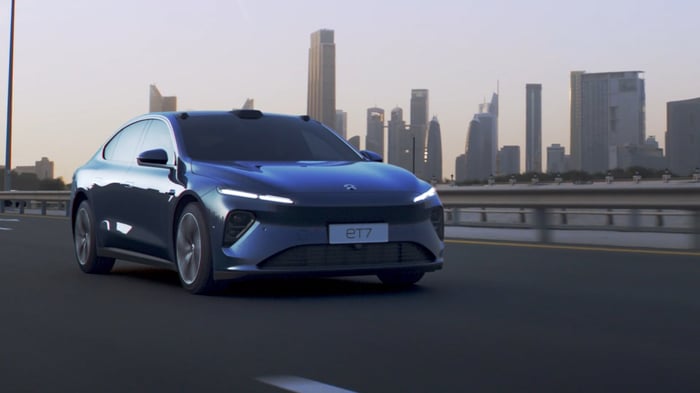 Nio has already shipped its flagship ES8 SUV to Norway, and will begin delivering them to customers within days. Its ET7 luxury sedan will begin production in early 2022 and will be available thereafter in Norway as well as Germany by the end of next year, the company has said.

Back in the U.S., the initial production of Lucid's highly anticipated Air sedan is now stirring the buzz for EV growth, especially in the luxury sedan category. Investors are getting more excited about the luxury electric sedan producers as they look for the best growth opportunities. With the Nio House opening in Norway, the company is staking a claim to begin building a community beyond just China. That, combined with Lucid entering the market, has some investors pushing shares of both companies higher today.

Why Nio Shares Were More Than 6% Higher This Morning
358%