The drug company is collecting money at the same time it was able to pare back a big tax bill.

Shares of over-the-counter drugmaker Perrigo (PRGO 1.61%) are up 10.5% as of mid-session on Thursday in response to news that it has settled a tax assessment made by Ireland for less than 300 million euros (roughly $340 million), and at the same time has collected $355 million euros following a successful arbitration in Belgium.

Perrigo -- the name behind several private-label OTC goods, a handful of prescription pharmaceuticals, as well as teeth-whitening brand Rembrandt -- announced on Thursday that it has settled a long-standing tax impasse with the Irish Office of the Revenue Commissioners at a cost much lower than initially feared. In 2018 Ireland's taxation arm claimed the company owed the country 1.6 billion euros in taxes. That number, however, has been pared back to only 297 million euros. After applying related credits, Perrigo will only be paying about 266 million euros.

For perspective, the company sold more than $5 billion worth of goods last year, and turned $115 million of that revenue into operating income. 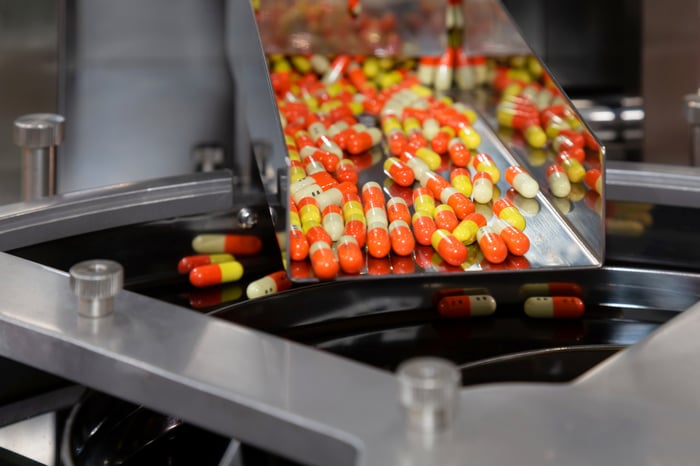 Separately, the pharmaceutical company also reported it has collected the 355 million euros awarded as an arbitration settlement with Alychlo NV and Holdco I BE NV linked to an acquisition agreement made in 2014.

It's a victory for Perrigo to be sure, and by extension, a win for Perrigo investors. But, the news in and of itself isn't a reason to own the stock. That's especially true given Thursday's big surge, which of course makes stepping into it now a more expensive purchase.

That's not to suggest this name is entirely unownable. The company's products are perpetually marketable, and revenue as well as earnings growth is achievable. Perrigo is also usually profitable, supporting its current dividend payment that translates into a dividend yield of 2.2%.

However, there's also a reason the stock is still trading at half of its 2019 peak price, just as there's a reason nearly half of today's intraday gain has also been given back. This morning's bullish gap left behind at the open only makes this stock more dangerous to step into right now.

Why Perrigo Stock Tanked on Tuesday