The company has committed to building several green hydrogen production facilities, and the federal infrastructure bill could be a boon for it.

Hydrogen fuel cell company Plug Power (PLUG -3.05%) has been working to expand its business both domestically and internationally. It's moving to get its fuel cells into electric vehicles in Europe, and is building hydrogen fuel infrastructure in South Korea. In the U.S., it's already operating a green hydrogen production plant, and has several more under development.

However, it was concerns about the U.S. business that were likely behind the stock's downward move Friday. After dropping by as much as 2.3% earlier in the session, Plug Power shares were still off by 1.5% as of 12:50 p.m. EDT.

The company has expansive plans to expand its green hydrogen production across the U.S. It recently announced plans for its first facility on the West Coast, which would add to facilities in Tennessee, New York, Georgia, and Pennsylvania that are under development. So what about these plans has investors concerned? Likely they are worried about the delays that the federal infrastructure bill is encountering in Congress, and the possibility that it might not pass at all. 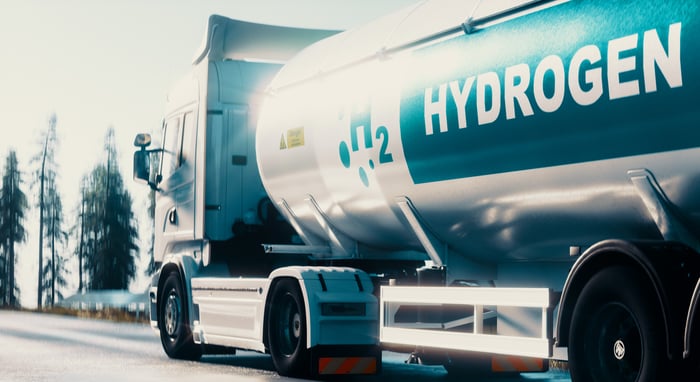 House Speaker Nancy Pelosi had said she planned to bring the bipartisan infrastructure bill to a vote by Monday of this week. She pushed that back to Thursday as progressive members of her party threatened to vote against it if a broader social spending bill wasn't also in line to pass. That plan has dragged into Friday, and there is still no word whether there is a path for the infrastructure vote to be held before the week ends.

Investors are likely taking the uncertainty as a bad sign. As it is currently written, the infrastructure bill would provide $7.5 billion in support for the adoption of zero- and low-emission vehicles. And the broader social spending bill includes provisions that are intended to address the climate change crisis. Green hydrogen -- which is produced using energy from renewable sources -- would seemingly benefit from both bills. As the politicians negotiate and the spending bills remain in limbo, holders of speculative stocks like Plug Power are likely getting more nervous and selling shares.